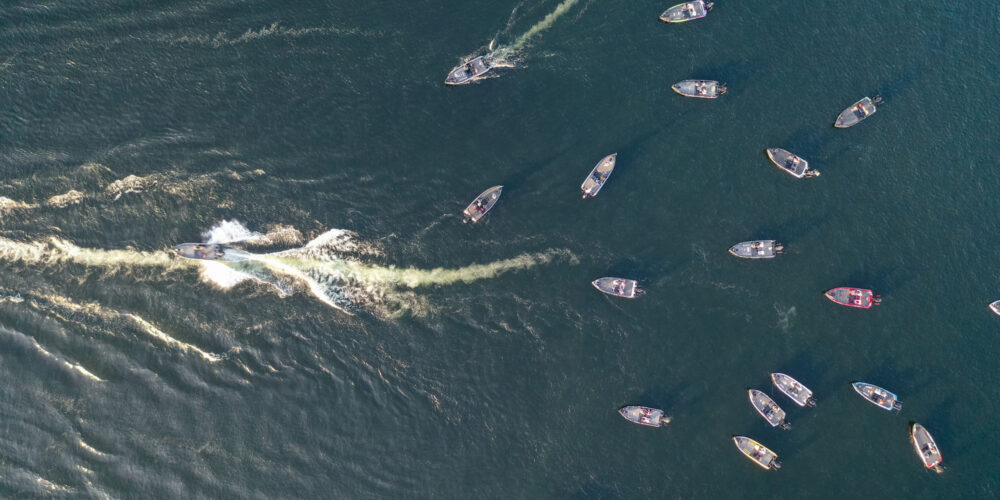 PLATTSBURGH, N.Y. – The shores of Lake Champlain have born witness to an embarrassment of history over the years. From Revolutionary War naval battles in 1776 to the first modern sightings of the legendary lake monster “Champ” in the 1970s, the waters of this expansive fishery are steeped in folklore. So, too, in the fishing world, where Champlain has become well-known as one of the best northern fisheries on the Tackle Warehouse Pro Circuit Presented by Fuel Me – a place where big bags are the norm more often than not.

This weekend, as the Pro Circuit descends on the lake for Covercraft Stop 6 Presented by Wiley X, a spot in bass fishing’s record books hangs in the balance.

Angler of the Year Down to the Wire

Going into the four-day event, Josh Butler leads Michael Neal in the Angler of the Year race by just 14 points. It’s a narrow margin that could be decided by Day 3, depending on the results.

“I’m looking at the next closest person to me,” Neal said. “Justin Lucas is only 18 points behind me, and I think l need at least a Top 20 to hold him off. He’s probably going to make the Top 10 here, because it’s a smallmouth fishery and he’s a guru. So my goal is to make a Top 20 and see what happens.”

Neal still considers himself to be in the learning phase of smallmouth fishing, having just started to concentrate on brown fish a few years ago. Still, he modified his boat with a long-shaft trolling motor going into the event and plans to spend the majority of his time targeting smallmouth offshore.

“I never fished for largemouth at all during practice, and I had a pretty good finish up here last year in the Bass Pro Tour event,” he said. “I’m still learning with them, but I can understand them somewhat.”

In pole position, Butler said he feels as calm and collected as he has ever been. After spending six days during pre-practice graphing the lake, Butler feels confident in his game plan going in.

“It just depends on the wind,” Butler said. “I do think it’s going to blow on Day 1 and possibly Day 2, but as long as the wind doesn’t blow 100 miles per hour, I should be okay.”

Like Neal, Butler is also planning to focus exclusively on smallmouth. However, he acknowledges the need for protected areas in the event that Champlain’s famously big water picks up.

“I’ve just found better quality with the smallmouth,” he said. “It seems like you can catch a 2 ½- or 3-pound largemouth, but if you hook up with a smallmouth you have better odds of connecting with an even larger fish.”

At more than 100 miles long, Champlain offers plenty of options, and it’s not hard to find something in your comfort zone no matter what you like to do. Plattsburgh, where the tournament takes off, is a great place to be for access to the plentiful smallmouth in the more open areas of the north end, and it provides equally convenient access to the largemouth in the bays. However, reaching largemouth down south near Ticonderoga – which has a well-earned reputation as a great place to win or make money – involves a 60-mile run over a lake that can get extremely rough at times.

Ticonderoga also hasn’t been as productive during recent events. In 2019, Casey Scanlon won a FLW Tour event at Ticonderoga, but the 2020 Bassmaster Elite Series event on Champlain was dominated up north. In 2021, the winners of the Elite Series, Bass Pro Tour and Toyota Series events on Champlain all came from up north. In only one of those events did Ticonderoga factor at all, but, it was the BPT event held at probably the most-similar time as this year’s Pro Circuit season finale.

This year, only a handful of anglers are expected to begin the tournament with that long, southern run.

Expect a barn burner. Champlain is fishing extremely well at the moment, with largemouth bass found in grass and on hard cover like docks and rock piles. Smallmouth will be heavily in the mix too; and they’re liable to be found on shallower flats, deep on boulders and rock piles and in the water column in pursuit of perch and alewives.

Anglers proficient in live sonar will have their pick of the litter, but old-school target fishing combined with covering large amounts of the lake with a topwater could also pay off huge. Don’t be surprised if 19-pound daily bags are needed to make the cut. A win featuring mostly largemouth over the entire event would be surprising, but with weights zeroing after Day 3, one crafty angler could swing for the fences with green fish on the final day.

“I truly believe you can catch them well on any part of this lake,” said Dakota Ebare. “There are fish all of this lake, and the place is massive. But you have to pick one and stick with it, because just getting around can be very difficult and time-consuming.”

Ebare believes the wind conditions, big waves and navigation challenges of Champlain present their own unique challenge to anglers trying to dial in their pattern. But, despite that, he still expects a heck of a tournament.

“I think it’s going to be an amazing tournament,” he said. “Weights will be super tight and down-to-the-wire all the way to the end. The James River was phenomenal and everybody caught them really well. I think this is going to be very entertaining and probably even a touch better.”