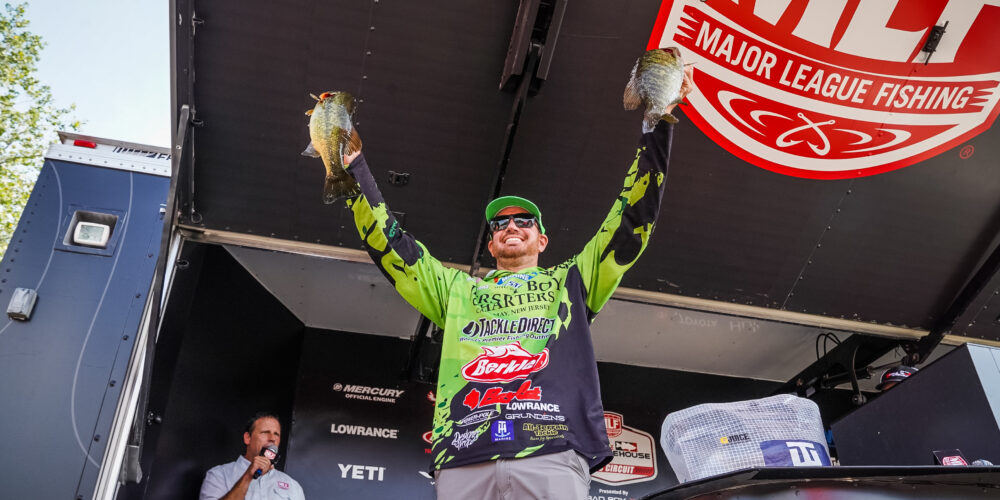 LA CROSSE, Wis. – Putting 13 pounds, 10 ounces on the scale on the second day of competition for Group B, Adrian Avena totaled 29-6 to win the group and advance directly to the Championship Round of the Tackle Warehouse TITLE Presented by Mercury on the Mississippi River. Behind him, Jared McMillan finished second in Group B and will be followed by eight other anglers from the group into the Knockout Round on Saturday.

Avena Heads to the Championship Round

After an uncharacteristic performance in the Bass Pro Tour event on Lake Champlain, Avena made up for it a bit with two great days of fishing to win the group and lock in his spot among the Top 10 in the Championship Round.

“Champlain is one of my favorite lakes in the country, probably my favorite,” Avena said. “I cut my teeth there and won a tournament early. Four of the Top 10 were at Ti, and that’s where I love. It burnt me a little bit, and I didn’t want to end on that. I’ve still got the St. Clair [Bass Pro Tour] event coming up, but it’s nice to come out here and really catch ‘em.”

Fishing mostly in a small section of the Black River, Avena is happy he’s not fishing the Knockout Round and looking forward to saving some fish.

“Honestly I feel like a million dollars, because I didn’t want to fish tomorrow,” Avena admitted. “I’m burning up fish up there, but I’ve still got something in my back pocket that I’m glad I don’t have to burn tomorrow. It’s one of those deals that I have no idea if I’m going to be able to get to it or not, but at least I’m going to do it on championship day. If I get stuck, I get stuck or if I take off my lower unit, I take off my lower unit, but at least it’s on championship day.”

The schooling bite has been robust this week, and Avena has taken advantage of it as well or better than anyone else so far.

“I’m throwing a swimbait and throwing a topwater,” Avena outlined. “I’m mixing in a bunch of other stuff, I think I’ve caught one on a fluke and maybe one or two on a jerkbait. I’m fishing schoolers, and it all comes down to making the right casts. I had a couple opportunities and pulled off some 3-pounders today, and I had some other opportunities where I made bad casts.”

Avena has also been dealing with some unique pressure this week, not from his direct competition, but from some young fishing enthusiasts in the same area he is.

“I hope their moms and dads or whoever are reading this, man,” Avena said. “These kids man, they’re reckless, dude. I’m catching [fish] out of two little areas, and if I catch one, they’re all in that area. If they come up schooling in the other area, [the kids are] all running to the area. There were a few times today where literally four topwaters were landing on the same breaking fish and one of them was mine.”

Were he out on a ledge with his fellow pros, the situation might be handled a bit differently, but Avena is just smiling and fishing through it.

“They’re 8 or 9 years old, I don’t know, they’re young, man,” he said. “It’s just one of those deals, and I feel like if I can talk to their parents a bit, maybe they need to go to church on Sunday, if they can let me fish it’d be alright.”

With Avena and Miles Burghoff set to fish in the Championship Round, the pros ranking 2-10 in Group A and B will battle for the other eight berths in Saturday’s Knockout Round. With zeroed weights and a lot on the line, it should be an exciting Saturday on the river.

Group A Knockout Round Qualifiers

Group B Knockout Round Qualifiers

The weekend is where things really start to count. Saturday’s Knockout Round pits the best of each group against each other for just eight spots in the Championship Round.

Additionally, the  Fishing and Outdoor Expo runs Saturday and Sunday, August 21-22 from 11 a.m. to 4 p.m. CT at Veterans Freedom Park, where fans can meet the pros and check out the latest in fishing and outdoor gear. The expo includes live music, great food, vendor booths from participating sponsors, activities for kids, giveaways and more.