Becker Moves Ahead on Day 2 at Lake Murray 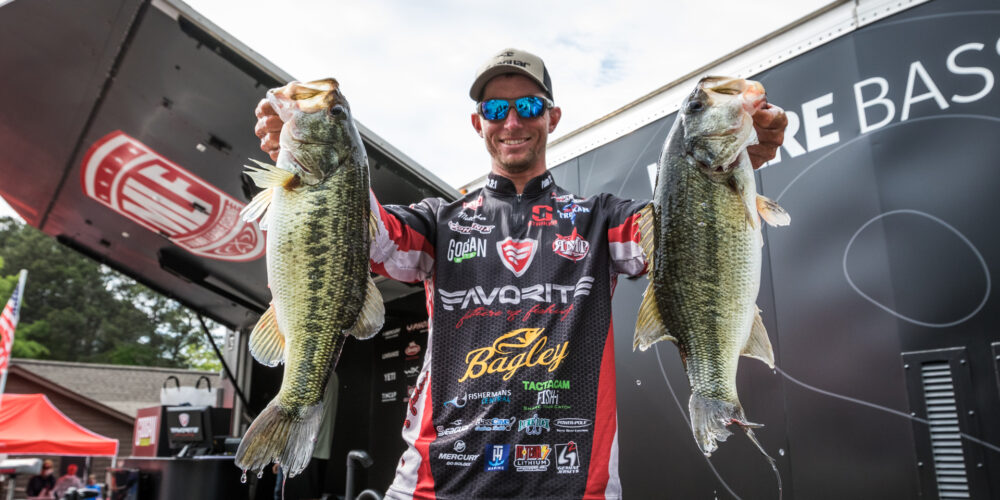 COLUMBIA, S.C. – No risk, no reward, right? Well, few anglers have taken a bigger risk this week than Matt Becker, and the reward has thus far spoken for itself.

Keying on a timing/schooling-fish pattern, the 2018 Rookie of the Year has turned only a couple 10-minute flurries into some of the biggest bags on Lake Murray. On Day 1 of the Tackle Warehouse Pro Circuit Presented by Bad Boy Mowers event, he turned three flurries into 21 pounds, 9 ounces. On Day 2, it was just one flurry, but it was good enough to help him toward his 19-9 bag that has him in the lead with 41-2 total.

“We survived another day, but boy was it stressful and risky,” says Becker. “I was super lucky on my timing again where I pulled up and was able to catch four of the five I weighed in in a few minutes. Otherwise, it was a struggle.”

That flurry came at 9 a.m. and before that, he hadn’t had a bite. But what really makes Becker’s pattern so stressful is he truly has no idea where, when or if he’ll get a bite. He knows the fish are there hanging off the edges of the points, but unless they move up shallow, he hasn’t been able to catch them. And he has no idea when he pulls up on a point if the fish have moved up, as the fish are not schooling visibly on the surface but just “schooling” and feeding up shallow.

Thus, he gets situations like what he had today.

“The spot I caught them on today I fished three times before I caught them,” says Becker. “I knew the fish were there, but I rotated through multiple times and never had a bite. Then I came back and they were there and they were eating. I went from zero to 14 pounds in minutes.”

That’s quite the risky pattern to hang a tournament on, but Becker admits he never really planned on doing it much to begin with. He originally wanted to try it the first morning before “going bed-fishing or fishing docks or something.”

“I was fortunate to get a couple bites early [on Day 1] to settle me down and get me into it,” says Becker. “That allowed me to keep doing it the rest of the event so far.”

And thus far, his timing luck has held strong, but Mother Nature may kill that luck tomorrow. A significant storm system is slated to rip through the Southeast starting tonight, hitting South Carolina early tomorrow. With it is a 100 percent chance of severe thunderstorms the majority of Saturday.

According to local Casey Ashley (who currently sits in 11th), the varying stages of spawn that fish are currently in (with some spawning and some having moved out to the points), has him deeply concerned the storms could mess up everyone’s pattern.

So how does Becker feel about tomorrow?

“For me, I say lets cancel tomorrow,” says Becker. “It’s one less day I have to hang on to the lead.