Catch More Bass Flipping With These Tips From Cole Floyd 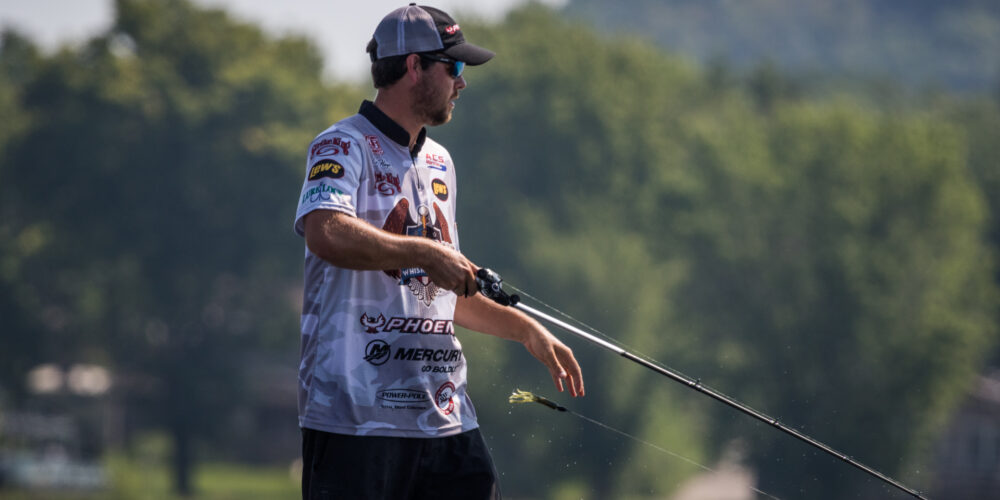 Cole Floyd has performed at a high level on the pro stage ever since leaving the college ranks. While he’s an admittedly versatile angler and known for his ability offshore on Tennessee River impoundments, one of his primary strengths has been flipping and pitching shallow cover. His father, Steve Floyd, won an FLW Series event flipping on Kentucky Lake, and with a good teacher and inherent skill, the younger Floyd has taken that skill nationwide with great success.

Floyd doesn’t have a secret recipe for flipping, but he’s developed a number of preferences over the years that might help you catch more bass.

According to Floyd, one of the most important parts of developing a good flipping pattern is to be committed to it. Of late, Floyd has supreme confidence in his ability to compete in tournaments where he can figure out a flipping bite.

“My confidence is all on the bank here in the last couple years,” Floyd says. “I can go out and have the mindset to go and get literally six to eight bites in a day, knowing that’s what I’m gonna get. But, if can land ‘em, I’ll be in good shape.”

That confidence is key when it comes to finding fish, which Floyd admits isn’t as efficient as idling ledges with five kinds of sonar.

“You’ve got to search your tail off for it,” Floyd says. “You don’t just go out and start catching them flipping. I’ve got tons of confidence in it, so I might spend a whole day looking for it, and I might find something at the end of the day. My confidence level is so high doing it, that’s what makes a big difference.”

Part of the game plan for Floyd is to cover a lot of water in practice and then hone in on derby day.

“I cover a ton of water when I’m flipping, especially in practice, I cover as much water as I can, I don’t slow down much,” Floyd says. “That’s something dad has taught me, especially on Kentucky Lake – just cover water. I’ll slow down on tournament day, in practice, I flip fast. If I get one bite, there are liable to be a bunch of fish there.”

Floyd’s strategy of covering water extends to how he works the bait. While carefully shaking a bait or pulling it repeatedly to the top of a mat can certainly entice flipping bites, Floyd likes to keep things moving most times of the year.

The Spring Is Special

Raised on flipping bushes in the heyday of Kentucky Lake, Floyd is just as comfortable around wood cover as he is around grass. But, during the spring, he’s got a few tricks that don’t come out the rest of the year.

“If it’s springtime and I’m flipping wood, I’m flipping for spawning fish,” explains Floyd. “Some days, sight-fishing, you know how they react. Some days they eat it first flip, and sometimes you really need to soak it in there. When I’m flipping in the spring, that’s one of my things – I’ll leave it in there longer than a normal guy. I might hop it once or twice and just let it sit. Its slow, but on tournament day, I’ll really slow down and do that.”

Alternatively, Floyd sometimes opts to force spawning fish to bite with a reaction. Using a trick learned from his dad, he’ll occasionally flip bushes with a ¾-ounce weight around the spawn.

Recently, Floyd has done pretty well flipping vegetation, be it when he caught 18 pounds flipping grass at the FLW Series Championship on Guntersville in 2018, last year at the Tackle Warehouse Pro Circuit Super Tournament on Erie or just this year on tour at Okeechobee and Eufaula. For Floyd, a lot of his success in grass boils down to knowing the potential for a great day is there and noting the fine differences.

“I like flipping wood, it’s probably my dad’s favorite, but I like the grass a little bit better,” Floyd says. “Just for the simple fact that it’s hard to find sometimes, but if you can find a stretch, you only need an 80-yard stretch to win a tournament.”

While finding that special stretch is great, Floyd has also done a lot of work running specific patterns while flipping.

“I don’t want to say I’m a real big grass guy, but I seem to do good in grass flipping,” he says. “I just kinda have an eye for it, it’s the little things that people overlook. Like, little kick outs – that was the deal at La Crosse – you could see where you would get a bite.”

There are all sorts of things Floyd has been able to hone in on over the years. From little points in the grass, indentions, a certain species of grass to the water color.

“It seems like you want to find the cleanest water you can, if possible,” he says. “You’ve got to have the right ingredients too, when I’m flipping grass, if I can, I like to have a good solid edge. You want it to be kinda hollowed out underneath. But you can also catch them fishing clumps.”

Floyd typically likes to flip grass with a 1-ounce weight and doesn’t go to the end of the earth to get a particular fall rate. At times, he’ll upsize, like he did flipping grass on the Detroit River in 2020, but that’s a move predicated on super thick or packed cover.

The Right Tackle Makes a Difference

Heavy line and a big rod are staples of the game, but Floyd’s preferences are worth a look if you’re contemplating an update to your flipping arsenal.

For a rod, he likes a Lew’s Team Custom Pro Mark Rose Ledge Series in the 7-foot, 6-inch, medium-heavy swimbait model. For line, he uses 65-pound Strike King Contra Braided Line and fluorocarbon ranging from 20-pound to 30-pound test. For his 20-pound, Floyd opts for Strike King Contra Fluorocarbon, which he tested extensively this spring during a week of flipping on Dale Hollow.

“A lot of times it is better to go with 25, or even 30,” he says. “You gotta think, most of those fish, they’re not seeing your line, it’s just a reaction. Especially on Kentucky Lake – I always used to flip 20-pound, and throughout the day I would break a few off. That 30-pound dad used, it was rope, you don’t break that line, and he would get just as many bites. But, it feels better to flip 20, and 80 percent of the time I’m flipping 20 or 25.”

From a bait perspective, Floyd flips the standard stuff, but this year he’s caught a lot of fish on a tube.

“I get on little kicks like that – not that I know that it’s any better, I just kinda got on a little kick this year,” he says of the tube. “My buddy is kinda who got me into it, Dalton Rand, he’s this old redneck back here at home that fishes tournaments. He said he’s been cracking them on the tube pretty good, and he showed me some little tricks, and they don’t see tubes very often, I don’t think.”

Next time you head to heavy cover, consider flipping a little more like Floyd. He’s finished 20th and fifth in the standings on the Tackle Warehouse Pro Circuit the last two years, and a lot of his fish came on a short line.