Cifuentes up After Day 2 on the St. Lawrence 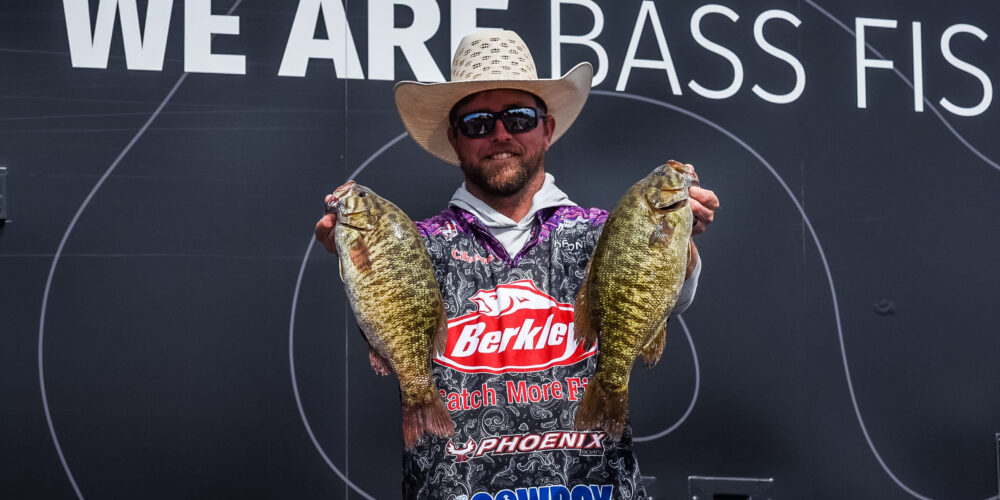 Many anglers figured it’d take at least 20 pounds a day to compete for the win in the Tackle Warehouse Pro Circuit Presented by Bad Boy Mowers event on the St. Lawrence. And after Day 1, 14 anglers had eclipsed the mark, with nine more within a pound of it to get the Savage Arms Stop 6 Presented by Abu Garcia off to a rollicking start.

Only six bags over 20 pounds crossed the stage today, and only five anglers have averaged that now for two days (six if you count Miles Howe being 1 ounce off).

It was a day of surviving strong, cold-front winds and some fickle smallmouth, and Joey Cifuentes survived the best to the tune of 18-14 today to get him to 43-3 for the event.

“Today was tough with the wind,” said the man many call “Cowboy.” “The fish were not biting really well. You want to bring your bait naturally with the current, but the wind was so bad and going against the current you couldn’t.

Cifuentes is fishing deep humps in the Clayton area and got off to a strong start this morning with a pair of 4-pounders to get him around 17 pounds by the time he left his main area.

From there, he started trying different things, even going shallow to fish for largemouth at one point. While no green fish helped, he bounced around enough to keep culling up a few ounces at a time.

“I’m kind of zoned in on the deep deal,” Cifuentes said. “I just don’t know if my area is going to replenish. So, I’m going to start there [on Day 3], but I need to expand there. I’m going to have to find some new stuff. That’s just my gut.”

Fortunately, he feels he has plenty of new stuff to hit, as he has a number of areas and patterns from practice that he dabbled in today that produced fish. Still, the potential of his main area will play big in his mind.

“I’m excited because I think I can stop on places and catch fish,” Cifuentes said. “I think I can catch a solid bag tomorrow doing a number of things, but I don’t know that. It’s smallmouth. I may only catch 12 pounds. Meanwhile, I know with my main area, I have the potential to catch another really big bag. So we’ll just have to see.”

With both Michael Neal and Skeet Reese making the cut to fish Day 3, the Angler of the Year race is still officially going. Less officially, Michael Neal came into the event with a lead and sits in 14th place while Skeet Reese is the hunter and in 30th. If Neal can stay in 21st or better after tomorrow the title is his. If he slips beyond that, Reese will still need to stroke ‘em to overcome his deficit.

At just 29 years old, Neal is on the verge of finally putting a big win on the books.

“I feel like my career is solid, but I’m missing that really defining moment,” Neal said. “I feel like this would be that if I can be fortunate enough to get it done.”

With close friend Cody Pike stroking 22-2 on the same area Neal is fishing, he’s not in a bad position to close it out in style on Saturday.

“I really don’t know about tomorrow, the fish are there, if you can just get the right bites,” Neal said.  “I was really two bites away from having what I had yesterday, I weighed [two 2-pounders]. If you replace those with 4-pounders I’m right back where I was. If the wind will slack up, I’ll have a lot better chance than I did today.”