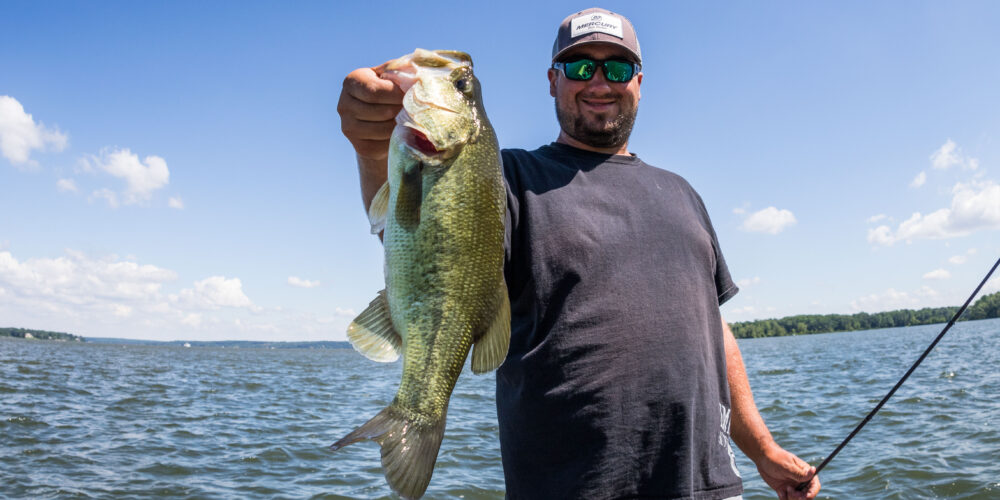 Fishing in his rookie season on the Tackle Warehouse Pro Circuit, Cody Pike has been in unfamiliar territory all season – literally and figuratively. Now, the 28-year-old pro has the chance to compete on a body of water he’s more than familiar with in the Federal Ammunition Stop 5 Presented by Lucas Oil on the Potomac River.

With just two events left, Pike is hoping to move up from 76th in the Angler of the Year points race to inside the top-50 cut in order to qualify for the TITLE at the end of the season, as well as maybe put himself back in contention for Polaris Rookie of the Year honors.

So, with that in mind, now seemed as good of a time as any to jump in the boat with the Virginia pro to see how he’s prepping for the biggest tournament he’s competed in on his (somewhat) home fishery.

We meet at Smallwood State Park around 5:20 a.m. ET and Pike wastes no time splashing his Phoenix in the water. There’s plenty of other competitors launching as well, and Pike wants to get an early start running to a few areas while the tide is still low.

After hopping in the boat and idling out from the dock, Pike hammers down and makes the run to his first location of the day.

As he sets down at the first stop of the day, the weather is much cooler than the day before with a light breeze blowing out of the north.

“It just feels like a topwater morning,” Pike says after putting a swim jig down and grabbing a popper. “I really wanted to check a few places early to see if there’s grass in them and if they’re dirty from the rain we’ve had.”

It only takes a few casts for Pike to connect with his first keeper of the day.

“Man, you think he wanted that?” he laughs.

Pike fires out another cast and has one roll on it, so he decides to pop the hooks off before making another cast.

“It’s been hard to get multiple bites in an area this week, so I better play it safe and take these hooks off just in case,” he explains.

After spending another five minutes casting around with only one other blowup to speak of, Pike pulls the trolling motor and makes a short move.

It doesn’t take long for Pike to realize his second spot of the day is muddier than he likes. Still, he grabs a swim jig and fires it around to keep the fish honest.

“We should have a good wind today to help pull some of this dirty water out of the river,” he says. “The last few days, the wind has been backing the tides up, so our low tides have been what a normal high tide is and the dirty water hasn’t been able to get sucked out of some of these areas.”

He kicks the trolling motor on high and just cruises around for a bit looking at the water before realizing his time is better spent elsewhere.

As he idles out of the flat, Pike fields a call from his travel partner and fellow Pro Circuit angler Michael Neal. The two talk briefly about how their respective days are going so far and what the game plan is for the rest of the day.

Pike qualified for the Pro Circuit by finishing third in the Eastern Division of the Toyota Series last year, so when Pike hangs up, I ask him about his friendship with Neal and how that affected his decision to fish the Pro Circuit.

“I’ve known Michael for a while and he’s been trying to get me to fish the Pro Circuit, but it just never worked out,” Pike explains. “After last year, I knew this would be the right time, even if the Potomac wasn’t on the schedule. And knowing that Michael was going to fish too made it even better.

“We room together and share some information, which has been good since I’ve never been to the first four lakes we fished this year. Now I at least know what to look for on the Potomac so this practice has felt way more comfortable.”

After another short run, Pike is back on the front deck firing around a swim jig.

Though he has a lot of rods on the deck, the selection is pretty straightforward. A variety of swim jigs, Senkos, a frog, a popper and a Texas rig pretty much sums up how the Potomac fishes.

“I got a lot of stuff on the deck now, but on tournament day, really all I need is a swim jig, Texas rig, Senko and maybe a Pop-R,” he says. “There aren’t many secret ways to catch bass on the Potomac.”

Shortly after saying that, he hooks up with another small keeper.

“There was a good school of fish here a few weeks ago when I was out here, but this isn’t what I’m looking for,” he says.

So, Pike rigs up a swimming worm and starts to comb the scattered milfoil with it before quickly connecting with another keeper largemouth.

It only takes another cast or two before Pike loads in to one of thousands of catfish that call the Potomac home.

“I’m surprised it took this long to catch one of these dang things,” he laughs.

He makes a short move up the grass flat and goes back to work with the swim jig.

As he approaches an old waypoint, Pike locks up with another keeper. Though it’s not the size he’s looking for, he seems OK with the fact that he’s connecting with fish in places they should live.

The milfoil in the area looks gorgeous and Pike says the grass as a whole on the Potomac is making a good comeback compared to the last few years.

“Before the Potomac went off-limits, the milfoil and hydrilla were looking really good in a lot of places on the river,” he says. “You had big, thick mats of it and more consistent clumps on these flats. But what happens is the star grass starts growing around that milfoil and takes over. You can still find areas with good milfoil and hydrilla, but the fish seem more scattered now that the star grass is overrun in some of these areas.”

Though he’s not one to fish hard cover on the Potomac, Pike slides over to some docks to see what’s happening.

With a wacky-rigged Senko in hand, it doesn’t take long for Pike to hook up.

Pike skips a handful more docks, but with no takers, he slides the boat back out the grass to keep searching for a school.

After 30 minutes of launching a swim jig, Pike once again connects with a bass as Neal works his way towards his buddy. Tossing the fish back, Pike and Neal decide it’s time for a midmorning snack.

In a rush to leave the house this morning, Pike forgot his bread, so he cracks his lunch meat and dives in.

While they relax, Pike brings up what he thinks it’ll take to win the event.

“I think 16 pounds a day will win,” Pike posits. “Someone may catch a big bag on Day 1 or 2, but even in local team tournaments it’s been taking 17 to win. So, 16 a day should be the mark. It just seems like there aren’t as many big ones in the Potomac right now for whatever reason. A 4-pounder is going to be a good one out here.”

With the break over, Pike and Neal part ways.

Setting down on a new grass flat, Pike thinks it may be time to tie on a vibrating jig, despite knowing he very well may catch more catfish than bass on it.

While he gets his bait retied, I ask him how he thinks the Potomac will fish this week.

“We’re not far enough away from the spawn, and there are probably still some fish spawning now, so I think the major spawning areas like Belmont and Chicamuxen will be big players.”

With the clock ticking past 1 o’clock, Pike decides it’s time to drop me back off at the ramp. Before I go, I ask him about how he feels about his season thus far and that he’s now competing on a place he’s actually familiar with.

“I haven’t been real happy with how my year has gone, but I can’t be mad considering I’ve never been to the first four lakes,” he admits. “But as far as this place goes, I either catch them or I don’t on the Potomac. This place changes so much year to year – unlike the James River where you know you can pull up to a brush pile and catch them. But it at least feels good to know my way around and know where I could maybe catch a bass. I was really hoping for a shot at ROY, and being 100 points back is a lot, but maybe I can make up some ground this week.”

With that, the young rookie idles back out for his final half-day of practice. He’s got a hill to climb if he’s going to reach his goals of ROY and qualifying for the TITLE, but he’s certainly on the right body of water to get some momentum going in the right direction.