Fitzgerald Charges to the Front at Eufaula 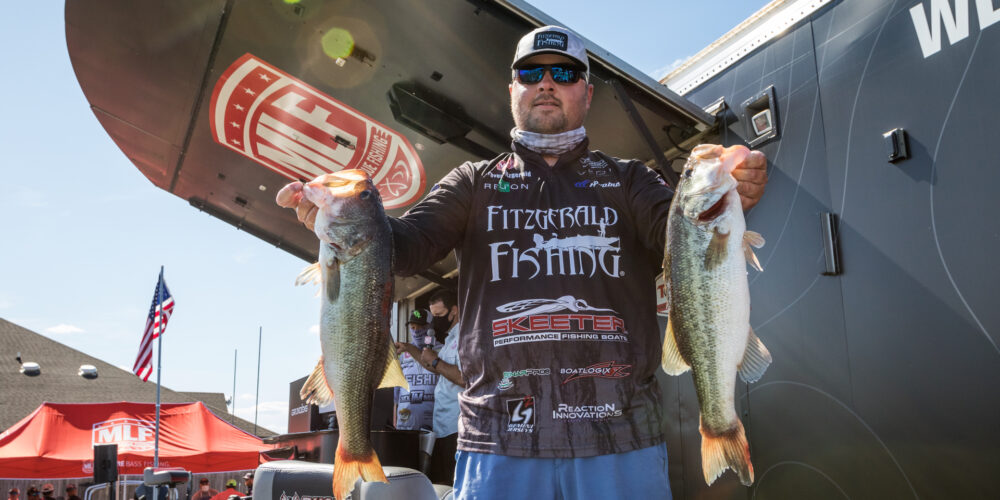 While the upper end of Lake Eufaula continues to be the main player for much of the Top 10 pros in the Tackle Warehouse Pro Circuit Presented by Bad Boy Mowers event, brush piles did rattle some things atop the leaderboard today. Trevor Fitzgerald is the new leader of the event and all his work has been done plucking bass from piles on the lower end of Eufaula.

Each day Fitzgerald has improved his weights. On days one and two he weighed in 15 pounds, 11 ounces and 17-7, respectively. Today, he brought in his biggest limit of the week, 20-12 to compound a three-day total of 53-14. Fitzgerald now carries a 1-11 lead into Championship Sunday.

Fitzgerald’s brush pile game has been a bit different from others running piles this week. Specifically, Fitzgerald chose to purposely ignore some of the bigger bass mansion brush piles in the hottest parts of Eufaula and instead focus on little bass shanties that dot the rural parts of the lake.

“I’m not fishing the big, beautiful piles set out on the obvious contours breaks,” Fitzgerald says. “Instead, I’m focusing on more isolated objects scattered out across vast flats. Some of it is brush, but they are smaller pieces of brush that have been there for while – like a single limb or laydown buried in the bottom.”

The biggest key for Fitzgerald: not seeing a single other boat running most of his bass shanties. He has about 20 isolated pieces he is rotating on and rarely sees another boat on them.

One pile in particular has produced half of Fitzgerald’s total weight for the event. He refers to it as the “magic brush.”

“I don’t know what it is about this one brush top,” Fitzgerald says. “It’s looks like nothing special: it’s just a little top about half the size of my boat. There are a hundred others out there just like it. But for some reason I catch a good one off it every time I stop to fish it. I have not seen a single boat around it all week. I had a couple of spectators today and I’m hoping they don’t fish it.”

Fitzgerald noted the presence of shad might be making the magic happen.

“I can see balls of shad on my LiveScope all around it,” he says. “And when I catch a bass off it, its belly is just packed full of shad. I have yet to just sit and fish that pile to see how many I can catch off of it. I might just go fish it all day tomorrow and see what it can produce.”