Game Day on the River as 2022 TITLE Gets Underway 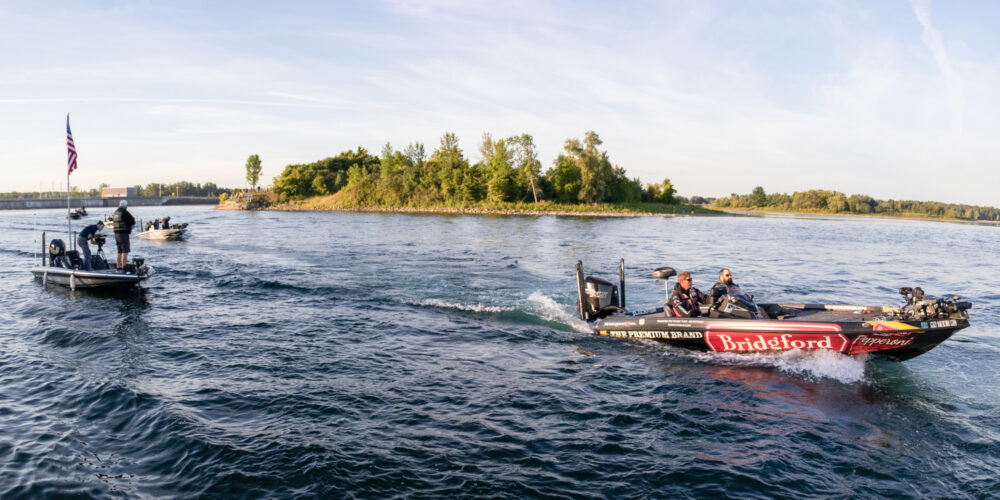 MASSENA, N.Y. – With Group A getting things rolling this morning on the St. Lawrence River for the Tackle Warehouse TITLE Presented by Mercury, the race for $200,000 and the belt is officially on. The championship event of the Tackle Warehouse Pro Circuit Presented by Fuel Me, the TITLE has a loaded field this year, with some true smallmouth experts and all-around superstars.

Here’s a look at a few key questions as Day 1 of six gets underway on the river.

In any given event on the St. Lawrence, anglers can pick their poison. There have been a bunch of Toyota Series events where the Top 10 was filled with pros running to Lake Ontario, or fishing shallow or deep in the river proper. This week, the lake is off limits, which will save some gas and probably reduce the weights a little, but it still gives the pros plenty of decisions to make.

Local guide Zach Goutremout is of the opinion that deep fish will be the way to go in this one, and it’s a take echoed by most of the field.

“I would say it’s probably going to be a deep tournament,” said the Chaumont, N.Y., native. “There seem to be a lot of fish in the 30- to 50-foot range, that’s where the majority of the fish in the river are. That’s where I’d think it will be won out of.”

Last year, Joey Cifuentes lead the Pro Circuit event on the river into the final day before falling to third. He fished both deep and shallow at that event, and he thinks deep is the way to go now.

Rookie Andrew Loberg thinks it’s a bit more of a toss up.

“I figured it’d be mainly deep, and I still think it is, but there are fish all spread out,” he said. “I think with the weather conditions we might have, both could really play.”

One thing is a fact – there have been some megabags caught both deep and shallow in practice. Ron Nelson caught over 25 pounds looking at ‘em on one of the days, and at least one angler caught over 26 pounds deep.

Which Group is the Best?

Looking at the groups for this event, both Group A and B are loaded with talent, but it seems like the anglers think that qualifying for the Knockout Round or Championship Round out of Group B will be the tougher challenge. Still, they can see advantages to either group.

“I don’t really care, but all I know, is when I saw the list of guys, Group B has hammers in it,” said Cifuentes. “Everyone is good here, there’s a lot of good people I’m fishing with, but I feel like the big smallmouth guys and some of the BPT guys are in Group B, I think it’s stacked.”

One of the smallmouth hammers in Group B, Nelson kind of wishes he was in Group A.

“Ideally, I’d like to be the first day, just because you have the best crack at the fish,” said Nelson. “Group B, it gives you a bit of a marker of what guys did on Day 1. But, my thought is, you’d better catch as much as you can on your first day regardless. You want a big first day to help carry you weight wise.”

In Group A, Kyle Cortiana wishes he had a crystal ball for weights.

“I think there are advantages to being in [either],” Cortiana explained. “The advantage of being in Group A is you know you’re going to be the first guy to hit something. If you did know some obvious juicy spot, you’ve got a good chance of it being yours. I also think Group B looks a little stronger, by the list, I counted like 13 names that scared me in Group B.

“But, I would love to know what weight I needed to have. That is super valuable information. Group B can actually lay off their fish based on what they see out of Group A. Group A can’t do that.”

Taking off today in Group A, Loberg is just ready to catch a bass.

“I like Group A just because I get to go fishing,” said the California pro. “I don’t want two days off – I’m excited to be in Group A and go fishing.”

What Will it Take?

Without even accounting for Lake Ontario, the river has produced some stupendous weights this year. During the spawn, Gary Miller hammered out 28-14 to win a Phoenix Bass Fishing League event out of Massena. A couple weeks ago, Goutremout and Jordan LaClair won a team tournament with over 50 pounds for two days and 29.07 for five on one of the days. Of course, what it will take to win – and what it will take to advance out of the Qualifying Round – are two very different questions.

To get out of qualifying, Loberg thinks it won’t take anything ridiculous.

Cifuentes’ guess for the Knockout Round is a bit higher.

A local to the river, Jesse Spellicy reckons that it’ll take quite a bit to make it out of qualifying and into the Knockout Round.

“I expect it to take 21 pounds per day to make it into the [Knockout Round] and over 24 pounds to win the one-day shootout in the Championship Round,” he said.

His winning total was echoed by Goutremout.

“I would say it’s probably going to take around 24 to win,” Goutremout said. “I did have a 29-pound bag the other day in the river. I’ve never had a bag that big this time of the year in the river before, it was kind of crazy. We happened to get three giants, and we hit about a 15-minute flurry. It’s rare that it happens, but I think 24 or maybe 25 is more realistic.”