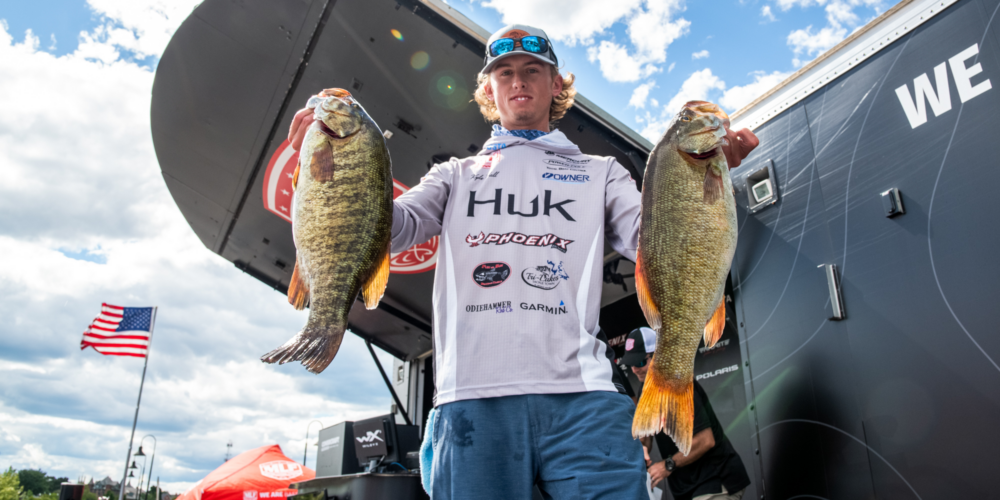 PLATTSBURGH, N.Y. — Coming off of a wire-to-wire barnburner on the James River, Covercraft Stop 6 Presented by Wiley X is off to an electric start on Lake Champlain. As Josh Butler, Micheal Neal, Justin Lucas, Mitch Crane and Spencer Shuffield jostle for position atop the Angler of the Year race, anglers across the field find themselves in a torrent of bass in the final regular-season event on the Tackle Warehouse Pro Circuit Presented by Fuel Me schedule.

Thirty- and 40-fish days were common for many anglers, the best of which comprise a Top 10 with nine bags over the 20-pound mark.

About 75% of the field chose to run north or east out of Plattsburgh, making for waters on the Vermont side of the lake and near the Canadian border. That decision netted multiple bags in the Top 10. Meanwhile, several competitors that gambled on a 60-mile run down to Ticonderoga were rewarded with a largemouth bite that has the potential to shake the smallmouth’s stranglehold atop recent tournament rankings. While the majority of the largest limits came from northern areas of the lake, several showed up from down south.

At the end of Day 1, Texas pro Kyle Hall is holding onto first place with limit of smallmouth worth 21 pounds, 13 ounces that he hopes to replicate on Saturday.

“I got to my first spot and landed on them,” Hall said. “I had a limit pretty quick in probably 10 or 15 minutes. I had three that I was comfortable weighing so I started running spots.”

“I scraped them all together drop-shotting,” Hall added. “If I can get 20 pounds tomorrow, I’ll feel good about it. We’re going to see how it plays out, though. I don’t need to build a lead, I just need to make it to the final day when weights zero.”

Just 5 ounces behind Hall, Missouri angler Casey Scanlon relied on what he believes is untouched water to boat 21-8.

“I’m thinking I have a hole to myself,” Scanlon said. “In the morning, I was contemplating making a big run to fish for largemouth but I stopped on the way there, because I had seen some smallmouth on this hole during practice. So, I made a pass through there and caught some little ones. Then, I saw some on my Garmin LiveScope and made another pass.”

That’s when Scanlon said his bite turned on, immediately turning into a limit of keepers. By about 9:00 a.m., he felt comfortable weighing the fish in his livewell and headed out to search for new water. That quest resulted in a largemouth just under 5 pounds that put him just off of the leaderboard’s pinnacle.

In third place, Evan Barnes also boated just over 21 pounds. Barnes needed more time to boat his limit though. After spending the first part of the day trying to entice a bite from heavily pressured fish around bridges, he began picking apart a “large general area.” Throughout the afternoon, Barnes leaned on a drop-shot to target specific holes in that area. The result was a bag featuring four smallmouth in the 4-pound range and a surprise largemouth of about the same size.

“It does change my approach a little,” Barnes said. “Instead of wasting what is basically half the day, I’m going to try to get off to a quicker start. I’m excited to lean on those fish, because there are bigger ones out there than the ones I caught.”

On Day 1, Champlain’s famously fierce wind remained somewhat in check. Though offshore anglers found themselves bouncing and bobbing, gusts rarely topped 15 knots. A similar weather pattern is predicted for Day 2, with wind easing up over Sunday and Monday. Temperatures should increase from the low 80s into the high 80s over the course of the tournament. Meanwhile, partly cloudy conditions are expected to remain in place for the duration.

Neal Moves Ahead for AOY, Hatfield Holds Serve for ROY

Weighing 19-2 on Day 1, Michael Neal slotted into 16th place in the standings and took a tentatively commanding lead for Angler of the Year. However, Neal wasn’t the big move today, the big move was a downward one from Josh Butler, who is currently tied for 99th with 15-7. In the standings based on Day 1, Butler has fallen out of the AOY lead all the way to fifth place, with Justin Lucas now in second to Neal.

With Neal in 16th in the event, he’s on track (if nothing were to change) to finish with 1,067 points. If today was the last day, Lucas would be second with 1,034 points. Butler will need to move up a lot on Day 2 to get back in contention, but it’s not impossible – there are some big bags to be caught, and 15 pounds isn’t a total disaster. Still, things are looking pretty good for Neal, and he may soon have a second-consecutive AOY title.

On the Polaris Rookie of the Year side, the layout is more simple. Sitting at 48th in the tournament with 17-6, Nick Hatfield stayed a few places ahead of Andrew Loberg in 53rd. If the tournament was over now, Hatfield would take the trophy with a 22nd place AOY finish and Loberg would finish the year in 32nd. With both rookies in the 17-pound range on Day 1, a big bag or stumble from either could change things up dramatically, but if the two hold serve tomorrow Hatfield will look pretty good. So, stay tuned, and watch weigh-in sharply, as a lot more than the Top 50 is on the line tomorrow.