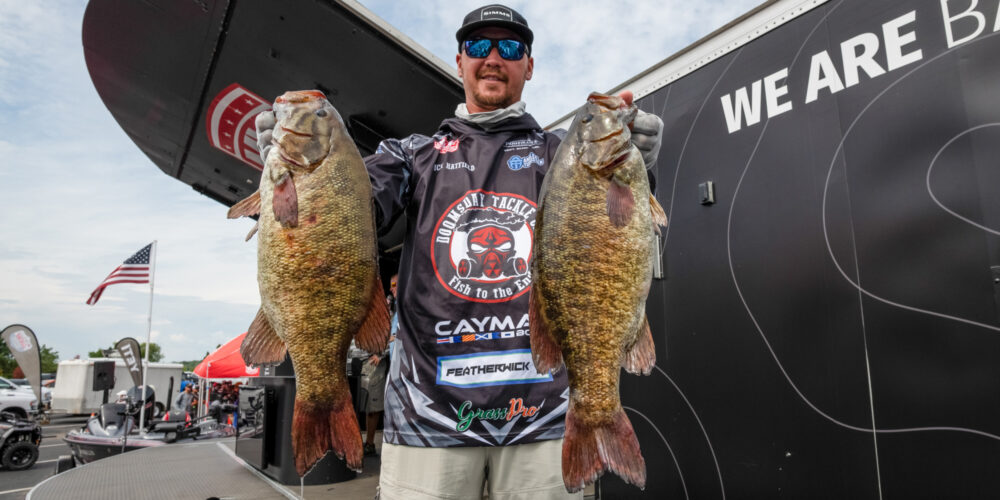 MASSENA, N.Y. – At this point, everyone’s number is the same – 20. As in 20 pounds. Because unless you eclipse that mark, it seems you’re not going to be safe to advance.

Nine anglers from Group A crossed the 20-pound threshold on the first day of the 2022 Tackle Warehouse Pro Circuit TITLE Presented by Mercury, and Group B added seven more on Wednesday, with Polaris Rookie of the Year Nick Hatfield being the best of them today with 22 pounds, 1 ounce. Throw in five more anglers who topped 19 pounds between the two days, and the St. Lawrence River is showing out.

And the scary thing is, the conditions have yet to get right.

Both groups saw strong east winds that went against the current, making it tough or even impossible in places to drift the deeper structure. That’s made the bite tough at times and thrown a wrench in many anglers’ plans.

Hatfield was not one of them.

Much like Group A leader Joey Cifuentes, Hatfield is making the dangerously long run down near Wolfe Island. However, Hatfield did his damage in a different area, on the Canadian side where he might have something special all to himself.

“There’s a ton of fish down there,” Hatfield said. “I’m using forward-facing sonar to see them, and I bet I saw 50 to 60 today. I only got eight bites, though. I don’t know why that is, but I dropped a camera down there in practice and they were so thick in there the camera was bumping into them. So, they’re there, but it’s going to take being patient.”

Patience is key, as what he’s fishing means bouncing around to find ones that want to cooperate. When he finds a school of them staged up right, though, it’s every cast. He caught a 5 ½-pounder to kick off a flurry of four fish in a row, and soon after, he pulled up on another spot and caught three that were all over 4 pounds.

That had him at 20 pounds, which he was thrilled with. Yet, despite being crunched for time on his way back in, Hatfield calculated he had a few minutes to stop on one last spot.

As for Friday, during that long run back he began thinking about what his gameplan should be, whether to try and win his group and go straight to Sunday or play it safer.

“Making that long run, I think it’d probably be best to just try and win my group and go straight to the final day,” Hatfield said. “I don’t want to have to make that run if I don’t have to do it.”

In Bobby Lane’s last two championship events, he finished second at the 2021 Tackle Warehouse TITLE on the Upper Mississippi River and then won this year’s REDCREST on Grand Lake. Can he keep it going? Sure seems that way as the Florida pro is in contention again after today despite a less-than-stellar start.

Lane’s first three hours on the water today produced one fish, as he says the northeast wind made it near impossible to fish his spots.

“The wind was everything today,” Lane said. “You try and drift down current with your boat straight, but with the wind blowing across, you couldn’t get to your good stuff. Every once in a while you would and you’d catch one, but they were often small because the wind didn’t allow the fish to set up right.”

Admittedly, Lane was frustrated most of the morning. Yet, he looked at his graphs and figured he had a bunch of waypoints to hit while working his way back, which calmed him down enough to try tossing a Berkley SPY Spinbait on one of those spots to catch a 5-pounder to “make him feel better.”

From there, it was just bouncing around tossing a Berkley PowerBait MaxScent Flat Worm on a drop-shot and methodically catching some 3 ½-pounders. That is, until one of his last spots produced one just shy of 6 pounds that might’ve clued him in to something.

“I feel like I’m in the right area,” Lane said. “If I make better use of my time, I learned a little today to try and get through to next round. Surviving today was a good thing.”

Losing a 6-pounder right off the bat is usually not how you want a championship to go. Unfortunately, that’s exactly what Martin Villa did this morning. Fortunately, he didn’t spin him out, as he was able to still bring in a giant bag, regardless.

“You never want to lose a 6-pounder, but if you are, today is the day,” Villa said. “Today was the work day.”

And Villa did plenty of work.

Having learned from last year what happens when the wind is not your friend, Villa picked an area with plenty of islands to help break up the effects of the wind and allow him to use his electronics and “100 packs of Berkley PowerBait MaxScent Flat Worms” to seek out individual fish. And he knows there’s plenty there, as he caught a 26-pound bag there in practice and after striking out pretty much everywhere else, he caught another 20-pound bag. Throw in his 20-plus-pound bag today, and he’s excited about his chances to fish there Friday. So excited, in fact, he’s second guessing to try and win his group.

“It’s a double-edged sword,” Villa said. “Yeah, it’d be great to go right to Sunday, but this place is so amazing you don’t want to be sitting around all day twiddling your thumbs. You want to be fishing every day you can. Though, if I do win it, maybe I can go fish the lake on Saturday.”