Hatfield Punches Ticket to Championship Round, Pros Set for Saturday Showdown in Knockout Round 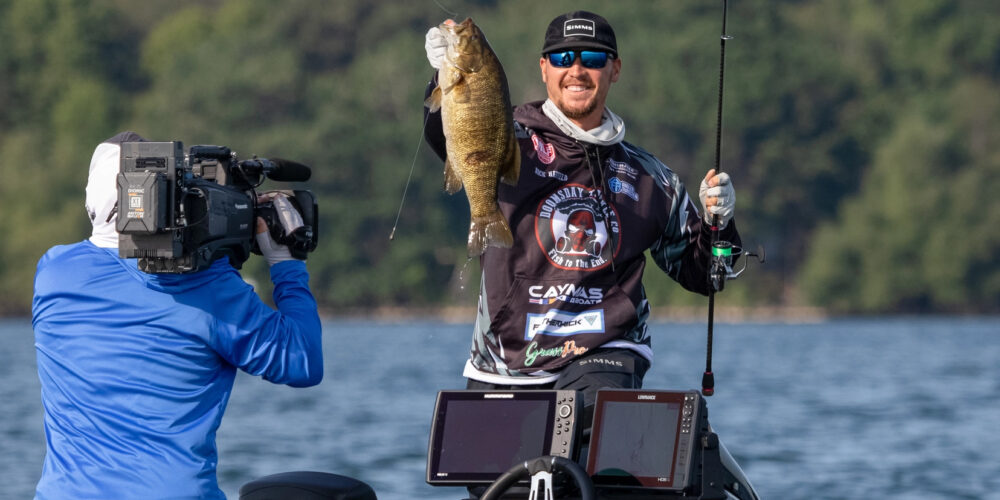 MASSENA, N.Y. – After another monster performance at the St. Lawrence River, one outcome looks entirely possible: The Group A and Group B winners very well could be headed for a massive head-to-head showdown come Sunday.

Yesterday, Spencer Shuffield “laid off” his fish and still cruised to victory in Group A of the Tackle Warehouse TITLE Presented by Mercury with a bag exceeding 23 pounds. Today, Nick Hatfield did the same and still brought in the largest bag of the event – 24 pounds, 3 ounces – to win Group B and punch his one-way ticket to Sunday with 46-4 total. Both pros skip the Knockout Round via their Qualifying Round victories.

It’s pretty clear both Hatfield and Shuffield have found special areas down past Clayton, New York, and now both get to let those places rest in preparation for Sunday.

Then again, Hatfield is so excited he doesn’t want to stop fishing. Who would, with a spot where the first two fish you catch go for more than 11 pounds combined?

“I’m jacked,” the Polaris Rookie of the Year said. “I feel good about what I’m doing. I moved around and didn’t have to fish really hard. They’re just loaded in my area. I just caught what I caught and left.

“I mean, you know smallmouth. They can leave without warning, but I’m excited to just make the final day.”

Right now, there seems to be no reason for his fish to leave his mile-long stretch on the Canadian side of Wolfe Island. The fish aren’t getting bothered by any other competitors, and, most of all, Hatfield said there’s a ton of bait swimming around.

All Hatfield has to do is roam around watching his Garmin Panoptix LiveScope for isolated clumps of rock. When he sees one, he’ll pitch at it, but if he sees one that has a few fish on it, that’s usually when his flurries happen. Case in point, he caught a 6 1/4-pounder, a 5 3/4-pounder and then lost another big one in three drops to start the day.

About the only thing that didn’t go right for Hatfield was some mechanical issues, but he doesn’t feel they were too serious as he was still able to make it back taking his time.

“We’ll get her a little tune-up before Sunday,” Hatfield said.

In the meantime, he’ll have to be like Shuffield and wait a couple days to see which pro has found the better money area.

“It feels good (to win my group),” Hatfield said. “Now I’m going to take a day off tomorrow, get everything ready and then send it Sunday. It’s a Top 10 shootout. If I go do (what I did today) or better, I’ll probably win the TITLE.”

After the first day, is was Bobby Lane sitting in second. Today, brother Chris Lane jumped up to take over the runner-up position, and he’s doing it differently than anyone else who made the Knockout Round – he weighed in some green fish.

The first day, Chris weighed multiple largemouth in his 20-15 bag. Today, he brought in the second-largest bag of the day, though this time only one green fish made it to weigh-in, citing that the largemouth tend to bite better when it’s cloudier. Still, Chris said what he’s doing shows just how incredible this place can be.

“This place is one phenomenal fishery,” he said. “If you want to catch fish however you want to here, you can do that. Whether that’s in 2 feet of water or 50 feet. Whatever you’re comfortable with, you can do it.”

What he’s been doing is adjusting to the conditions both days and hitting as many areas as he can to try to connect with those 4- to 4 1/2-pound fish. Fortunately, his versatility has him primed to handle whatever the conditions are thrown at him this weekend. But right now, his focus is on making it past the Knockout Round.

“It’s back to work,” Chris said. “Another day in the office is the way I look at it. We’re starting over from zero. We’re not trying to conserve or save fish. Just hammer down and hopefully get to the Championship Round.”

He’s not doing anything flashy, but Martin Villa has himself right where he wants to be in the Knockout Round – and that’s despite today not being his best day.

While 5- and 6-pound kickers have become the norm this week, Villa didn’t sniff anything close to that today. He did catch one and lose another 6-pounder the first day, but today it was good quality but not the studs he’s hoping show back up.

“The guys catching 6-pounders will be the most dangerous,” Villa said. “Today, I didn’t have any big bites. I had good, quality fish. I caught a lot of fish. I feel like tomorrow can be a completely different day, and I hope today was my light-weight day and not that I’ve overfished my fish.”

Hanging around Eel Bay, Villa certainly has plenty of options as he’s hitting a large area of humps. The only issue with that, he said, is trying to hit it all.

“I didn’t even hit half what I wanted today,” Villa said. “It’s not that I don’t have stuff to fish. It’s whether or not I have the time.

“Tomorrow, I’ll try and manage my time better. It’s a brand-new day, and I’ll definitely need a big bag because 20 pounds might not even make the cut.”

Group B Representatives Set for Knockout Round

Hatfield is clearly on something special, and he had to be to win what many figured was the tougher group. Just look at the pros second through 10th who are headed on to Saturday’s Knockout Round against the best from Group A. Smallmouth savant Justin Lucas barely scraped in with 38-4 over two days, and two-time Angler of the Year Michael Neal was left on the outside looking in. Of course, Neal missing is notable, but it hardly leaves a slack group. Without him, the Lane brothers are always dangerous, Villa is a phenomenal northern angler and Jon Canada has spent hundreds of days on the water in New York and Ontario over the last few years. Come Saturday, many are figuring it may take 22 pounds to make it to Sunday and the Championship Round.