Hibdon Clings to Lead After Tough Day 3 on the Potomac 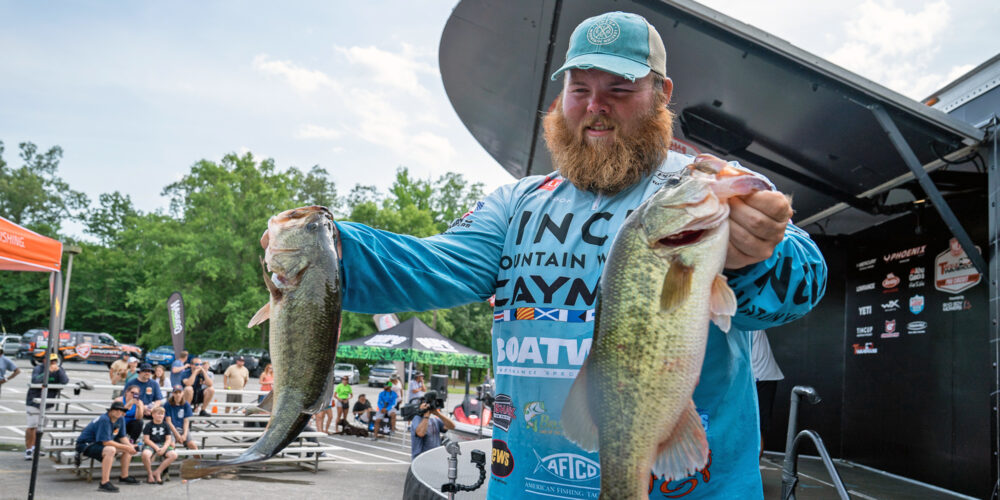 While things were rolling for Lawson Hibdon on the first two days of the Tackle Warehouse Pro Circuit Presented by Bad Boy Mowers on the Potomac River, Day 3 was a slight bump in the road for the rookie pro. Weighing back-to-back 17-pound bags on Thursday and Friday, Hibdon weighed just 13-3 today giving him 47-11 overall.

He’ll hold a 15-ounce lead over Michael Neal heading into Championship Sunday, and just over 3 pounds will separate Hibdon from 10th place, so anything can happen, and it should make for a heck of a show on MLF NOW!

With a live camera in his boat all day today, Hibdon said his day was off from the start. Even though the young Missouri pro admitted that his Day 2 was “tougher” than the previous day (he still weighed 17-8), he believes that Day 3 was more about never getting in the right rhythm.

“I’ve started in [Aquia Creek] every day, but I’ve left out of there in the last two days fairly shortly because I’ve had decent stringers,” Hibdon said. “Well, today I could never get that decent stringer going so I could leave to go look for a big one and I left out of there with about an hour left to fish. I really should have left earlier because that tide was already getting to be wrong for me to come back up to catch a good one.

“It just never clicked today. Everybody always talks about that tide clicking, it never clicked for me today. I don’t know what the deal was but I missed a ton of bites. They would eat my jig trailer off or I’d hook ‘em for just a second and they’d come off. I don’t even know what to do differently to try and fix that.”

Hibdon ran into the same missed fish issue on Day 2, yet was able to still connect with some solid bites later in the day. Today, he missed a good fish or two he hopes won’t come back to haunt him.

“I lost one that was 3 ½ or 4 pounds and you can’t lose one like that, not in a deal like this, it’ll cost ya,” he said. “Hopefully, I can somehow push through and try to figure them out again because I really think I was off by 30 minutes or an hour today.

“It was just a weird day. It was worse than either of the practice days I had. Today was just one of those off days. You get in a bad roll and it just keeps on rolling. It’s a bad deal when it starts happening because your mind gets the wrong direction pretty quick.”

Hibdon admits he’s no tide expert, but after four days on the Potomac, he’s learning certain windows when the fish seem to bite better, which explains why he feels his timing was a bit off today. He doesn’t plan to change his program of flipping hard cover with a jig or worm and covering grass with a swim jig or vibrating jig, but he does feel optimistic that he’ll have a better approach to running water tomorrow to put him in the right places at the right times.

Even though the 26-year-old Hibdon is in a position to win the biggest tournament of his life, you wouldn’t know it by talking to him. There are no rattled nerves or signs of stress on the outside. Maybe it’s the fact he was born into the fishing lifestyle and seems destined for a career, or maybe it’s the fact he has some of his family here with him this week. Regardless, Hibdon isn’t letting all the media attention and spotlight distract him from his goal of bringing home the big trophy.

If there’s a distraction at all for Hibdon this week, it certainly and understandably would be the recent and unexpected loss of his uncle, Shannon Beckmann.

“That was truly my best friend, he was my uncle, but hell, we fished together almost every day at home,” Hibdon said. “It’s been hard for the last three weeks. I’ve wanted to call him every night this week. It’s a tough deal but I feel like he would be proud this week.

“But it helps mentally having the family here this week,” says the young pro. “Not having to go to the hotel at night and call back home, they’re there with you. That definitely helps a bunch and you can think a little clearer and work on your stuff better. That’s helped me a lot this week.”