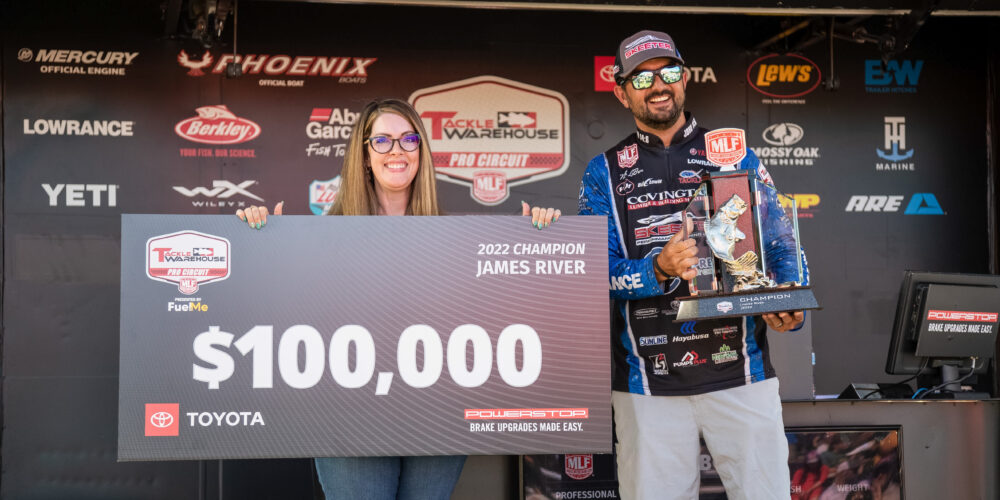 RICHMOND, Va. – All week long, Nick LeBrun looked in control as he posted consistent bags the first three days to lead the field going into Championship Sunday at Toyota Stop 5 Presented by PowerStop Brakes on the James River. But the Louisiana pro saved his best for last with a limit weighing 17 pounds, 9 ounces to on Championship Sunday win his second straight event.

Just over a month removed from his triumph on Lake Guntersville, LeBrun added another big trophy and $101,000 more to his bank account. He’s just the third angler to complete the feat, joining Brett Hite (2008) and Mark Rose (2017) as the only back-to-back champions on the Tackle Warehouse Pro Circuit Presented by Fuel Me or FLW Tour.

“It was all God this week, he’s got everything set up for me, and I’m just trying not to mess it up,” said LeBrun alongside his wife Jolene on Father’s Day. “That I get to live my dream and have an amazing wife and kids and to win another tournament shows how good He is. My wife is the best mama in the entire universe.”

LeBrun looked comfortable on the James as he caught solid bags all week long, but his first trip to the Virginia fishery had him a little uneasy considering the long runs he chose to make and the tidal swings.

“This was the most stressful tournament I’ve ever fished,” LeBrun admitted. “I was running a long way every day and put over 450 miles in this week and the running isn’t easy – it’s treacherous, especially if you’ve never been here before. I probably ran across areas I shouldn’t have and then once you get to your area, you’re constantly looking at the tide and planning your strategy for each area. I’m spent after this week.”

LeBrun targeted the Chickahominy River, but unlike many who made the trek there this week, LeBrun focused on cypress trees and docks and was able to ride a strong morning bite each day of the tournament. On the final day, he had the luxury of fishing it as long as he wanted after backing off to conserve the area for the first three days. The bite still happened early for him as he bagged his winning total well before lunchtime.

“It was a current seam around docks and trees,” LeBrun said of the winning spot. “It was a little section with a lot of cypress trees and that’s how I like to fish. It took a lot of effort to make the casts and get the bait in there correctly with the current.”

LeBrun did most of his damage early in the week with an ultra-shallow bluegill-colored squarebill. On Day 3, he added a wacky-rigged 5-inch V&M Chopstick with a 1/0 Hayabusa WRM201 hook into the mix to secure the win.

“I rotated between a few different crankbaits, but one key was changing out the stock hooks to No. 2 Hayabusa TBL930 trebles with the NRB coating,” he said. “I was deflecting the bait off the trees to get them to react.”

“I’d lob it in there and let it sit and then barely shake it,” LeBrun said. “The rod would load up when they’d swim off with it. That was key this week for me to get the win. I set up on the spot today, caught four small ones and then the big ones started biting it pretty good. I caught a 5-pound fish and went to the other side of the dock and caught a 4-pounder; it was a special day.”

When reminded by Chris Jones on stage that he’s just the third person to accomplish the back-to-back feat, LeBrun was humbled and looking for the right words to describe the accomplishment that put him in the exclusive company of Hite and Rose.

“Those are some scary, famous, and awesome names to be mentioned with,” he said. “The James River will always be a special place to me. It was a dream day today.”