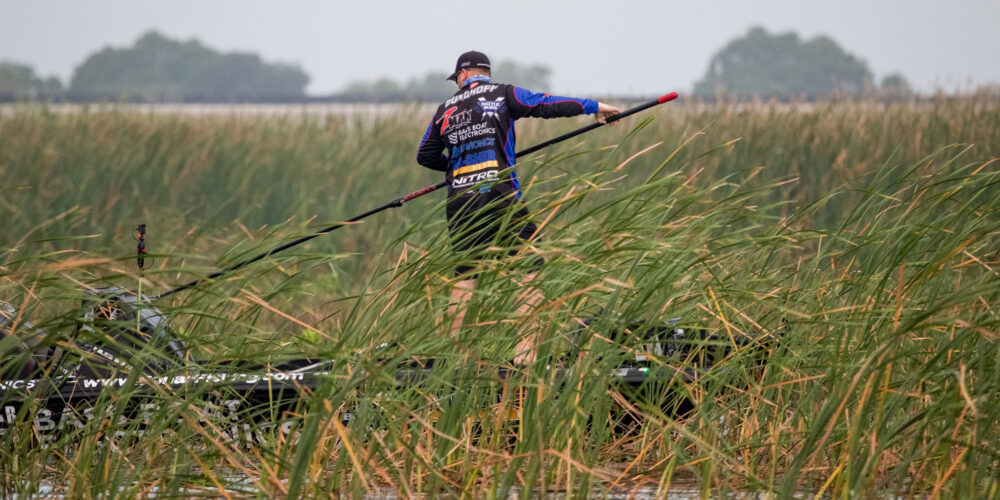 CLEWISTON, Fla. – Day 3 of the 13 Fishing Stop 1 of the Tackle Warehouse Pro Circuit Presented by Bad Boy Mowers season opener on Okeechobee has been different. Not bad – just different.

Days 1 and 2 featured relatively calm conditions and a field of pros stacked into several key areas. Today, with winds gusting across the big bowl that is Big O, the 50 remaining anglers have turned to hunkering down with Power-Poles extended in shallow, shallow water.

So shallow for some, in fact, that leader Miles Burghoff had to push-pole into his area this morning to flip up 12 pounds to this point. It hasn’t been easy for Burghoff, but he’s committed to his area and knows he’s on the right fish. The key: meticulously picking apart every little stretch, poled down and flipping fast but fishing slow.

Burghoff has about 55 pounds at the time this article was published, but he’s not sitting on a comfortable lead.

McDonald Still in the Hunt

Fishing within casual-speaking-voice distance of Burghoff, Bill McDonald has 17 pounds today and trails by just ounces. Like Burghoff, McDonald is flipping and pitching to vegetation, leaning on the hopes that the area – despite heavy pressure – has enough fish to keep him in the hunt heading into Championship Sunday.

Part of the reason so many pros are stacked up and locked down is the wind’s effect on the water clarity. With winds blowing 10-15 out of the southeast, that end of the lake features some cleaner water than can be found to the northwest, where the wind is muddying things up. On Okeechobee, that can be a recipe for an increasingly tough bite.

After a disappointing Day 2 following his first-day-leading 27 pounds, Jim Neece Jr. is back in business with 15 pounds for sole possession of third place (unofficially). While we haven’t gotten reports from the entire field, Neece currently has an 5-plus-pound cushion over Skeet Reese in fourth.

Reese and Dicky Newberry (fifth) both have about 9 pounds today, though, which means both are in position to close the gap by the time they have to head back to check-in later this afternoon.

Time is of the Essence

With the field down to 50 pros, weigh-in starts an hour later than the previous two days, which means an extra hour to fish for some. That’s a crucial change given the afternoon bite window that’s opened up after 11 a.m. ET or so the last couple days.

The caveat: With as windy as it is, anglers haven’t been as willing to move around much, which is really going to put increased pressure on the most popular areas. Not to mention the fact that making the run back to check-in is going to take a little extra time today.

All eyes are on the top-10 cut line today. Only 10 pros fish tomorrow for a shot at up to $135,000, and only 2 pounds, 15 ounces separates sixth (currently 2020 Tackle Warehouse TITLE champion Rusty Salewske) and 15th (rookie Clabion Johns). We’re sure to see a bunch of movement between now and 4 p.m. ET when weigh-in starts, especially in that range.

Therein lies the key to making moves in the waning hours of Day 3. As great a fishery as Okeechobee is, there aren’t as many 4- and 5-pound bass swimming around as many would like there to be – but there are enough 8- and 9-pounders to anchor an otherwise marginal bag and propel someone from outside the cut line into contention.

We’re just a few hours from weigh-in, but expect to see a lot of movement on the unofficial live leaderboard, which will be updated until 3 p.m. ET, and be sure to tune in for the live weigh-in show at 4 p.m. ET on MajorLeagueFishing.com.