Offshore Battle on the Horizon at the Harris Chain 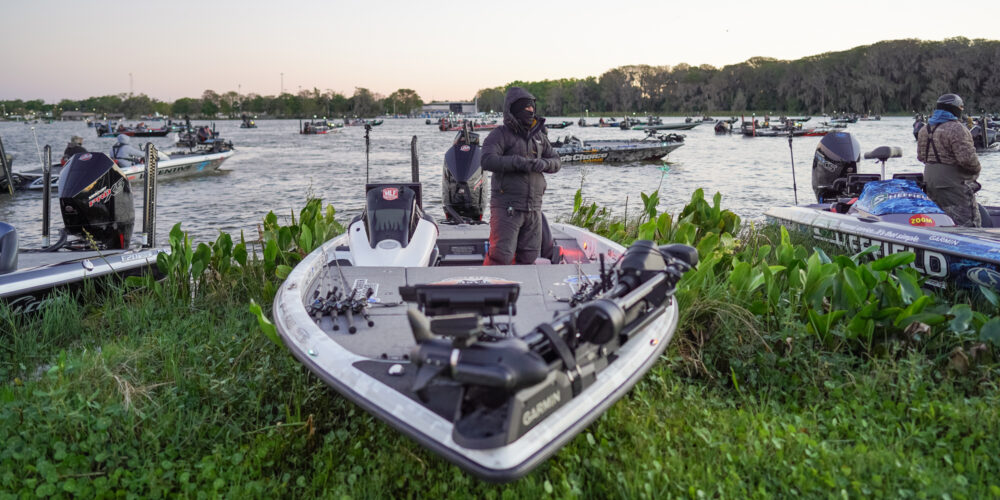 LEESBURG, Fla.– Temperatures in the 30s aren’t exactly how you want the day to start in Florida, but it’s the hand the field was dealt for Day 1 of Bass Boat Technologies Stop 2 on the Harris Chain of Lakes Presented by Frogg Toggs. While cold fronts in Florida may be a bass angler’s worst nightmare, it may not be as bad as it could be this week.

Generally speaking, when cold fronts hit during Florida-based Tackle Warehouse Pro Circuit Presented by Fuel Me events, and it happens often, the events are usually held slightly earlier in the season. Then, in January or February, warming trends trigger fish to start thinking about spawning and cold fronts put a hard stop to that.

This week, with the event being preceded by weeks of warmth, and nice weather the rest of the event, a lot of the pros believe there isn’t much spawning left to be done. In fact, all eyes may be looking at the offshore bite – which is always a factor on this system regardless of the time of year – and that means targeting bigger groups of postspawn fish who are in the mood to eat.

Of course, that’s not to say there won’t be fish caught shallow. Everyone knows a cold front can make for a great punching bite. But, brush piles, offshore hydrilla and shell beds could carry the torch more than they have before.

Tackle Warehouse TITLE champ Jimmy Washam finished runner-up at the Harris Chain in 2020 thanks to a hot jerkbait bite offshore. This time, he says the lakes are different, but he’s pointed himself in a similar direction post-practice.

“I looked at five different lakes on Day 1 of practice, and they’re all different,” Washam said. “There’s a lot of milky water, not the black, tannic Florida water. I think that’s due to dead or dying vegetation. The fish are still bitin’, you just have to catch them different.”

Washam says he’s headed through the canals into Beauclair, and that he leaned on the offshore bite in practice.

“I spent most of my time trying to find offshore stuff,” Washam said. “I went in some canals and looked, and there’s definitely some spawning fish, there’s plenty of beds. But, sight-fishing is not my game. I did mark three or four decent fish, just in case, but there’s a lot of postspawn fish. I would say that the large majority of the fish in the chain are postspawn right now. I caught a couple of big ones with that postspawn look, and I caught more fish doing things that I thought postspawn fish would be doing.”

One thing he hasn’t seen thus far is a shad spawn, which is something a lot of anglers figured would be in play.

“There was one here two years ago, and I was capitalizing on that first-thing,” Washam said. “But, I have not seen a shad spawn in two days, and I’ve looked for it. I am seeing fish feeding on shad, but they’re not spawning.”

As for a weight prediction, Washam expects the fishing to be pretty good, but perhaps not as good as he wanted it to be. The Tennessee pro thinks it will take 55 pounds to make the Day 4 cut, which works out to more than 18 pounds per day. Then, with zeroed weights and Florida bass involved, all bets are off for the final day.

Carson Doesn’t Expect Much from Spawners

There aren’t many pros in the field that know the Harris Chain like Pro Circuit rookie Keith Carson. He’s also one of the best suited to discuss the state of the spawn, which according to him, there isn’t much to discuss.

“It’s been quite warm for the last three weeks here, much warmer than normal,” Carson said. “You’d think that’s good, but it’s not, well, not for me anyway. I’m a shallow-water guy and I tried to look for beds and I saw like 150 empty beds.

“So, I’m going to be doing a little more offshore fishing. You’d think me being a local on Harris I’d have all these offshore waypoints, but I have about six. I did pull up to one of them and caught a 5-pounder, so I think I’ll do some more of that because the offshore fishing will be more stable than the shallow stuff with this cold weather.”

One of the main reasons Carson doesn’t think you’ll see much from shallow guys this week is the fact the water temperatures are in the upper-70s, which isn’t normal for this time of year.

“Because of the warm weather we’ve had, the water is around 78 degrees,” Carson said. “We’re in water temperatures that are more like mid-April to the beginning of May.

“There’s also a shad spawn going on right now. There’s a lot of shad and tilapia (offshore), which is a sign we’re more in that mid-April to May timeframe. So, the spawn is nearly over. I remember a time I caught 28 pounds off of beds on March 17, and another time I caught 25 pounds at the end of March, so going through history in my head I’m thinking of the time of year, but I have to fish the moment and right now that doesn’t look like it’s up shallow.”

The frigid temperatures forecast for Day 1 haven’t got Laramy Strickland flustered at all. In fact, he almost likes it.

“I got some bites, I’m kinda excited, the weather is lining up to maybe do what I did last time,” Strickland said.

Last time, the then-rookie hammered out 31-6 with a punching rod on Day 2 of the event, which he then rode to victory. Still, he doesn’t expect flipping domination just because it’s going to be a bit nippy.

“I definitely expect the winders to do way more in this tournament than anybody else,” Strickland said. “Those fish out there get acclimated to the cold a little bit quicker. Offshore in the grass or the shell, they get more acclimated to the cold, I feel like that bite stays consistent.”

With some flipping and a lot of winding in play, one of the wild card factors is the shad spawn. It just so happens that Strickland has found it going on in two lakes.

“I’ve only been on the lakes early enough two mornings, and I’ve seen some on both lakes I’ve been on,” Strickland said. “One of them had fish, and one of them did not. If it gets bright and sunny with it cold, I think it’s gonna be pushing it to get on a shad spawn (on Griffin). If someone gets on a shad spawn, I think it’s going to be in Harris.”

Projecting a Top 10 weight of between 50 and 53 pounds, Strickland isn’t planning on letting up if the stars align.

“I’m going to catch as much weight as I can catch (on Day 1),” Strickland said. “I’m not holding back at all. Unless there’s no company, which is probably not going to happen.”

Anglers will take off at 7:30 a.m. ET each day, with the full 158-boat field fishing on Sunday and Monday. The Top 50 pros based on their two-day cumulative weight will advance to Tuesday. Only the Top 10 pros, based on cumulative weight from the first three days, will continue competition on Championship Wednesday, where weights will be zeroed and anglers will compete in a one-day shootout for the grand prize of up to $135,000, including the lucrative $35,000 Phoenix MLF Bonus for qualified anglers.