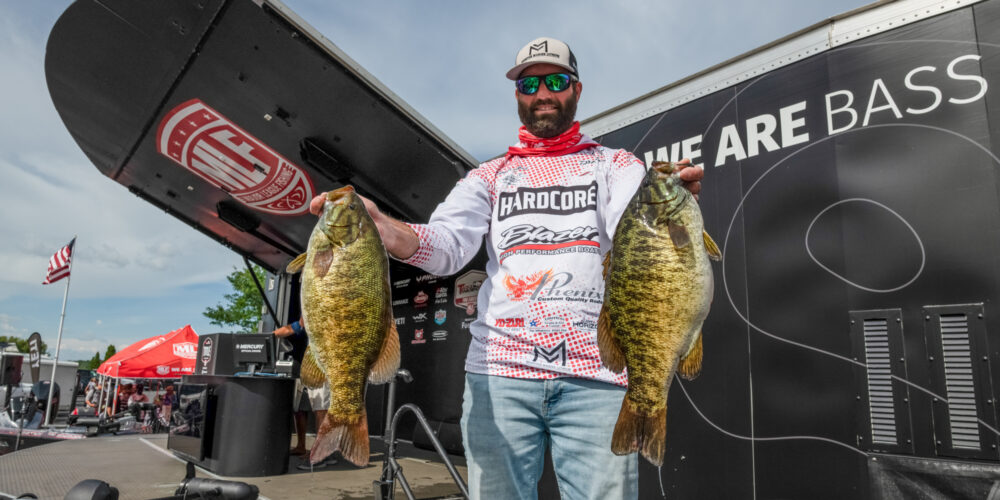 MASSENA, N.Y. – It’s been two years since Spencer Shuffield was this excited about the final day of a fishing tournament. Now he’s just hoping for a better outcome.

At the Tackle Warehouse TITLE in 2020, Shuffield had an area with thousands of smallmouth on it that helped him win the Knockout Round. And there’s no doubt in his mind that had the wind not blown so hard the final day and he was able to get to them, he would’ve won that event.

Fast forward to this version of the Tackle Warehouse TITLE Presented by Mercury, and Shuffield again feels he has an area with the potential to win it all, and once again, he’ll be fishing the final day. That “exciting” area produced a 23-pound, 3-ounce bag today – and might’ve been able to crack 25 pounds if not for a lost giant – to help him win Group A and automatically advance him to Sunday with 44-8 total.

“It feels great (winning my group) because I really laid off them and still managed to do that,” Shuffield said.

You read that right, he laid off his fish and still could’ve cracked 25 pounds. And it only gets scarier when he feels there’s still more to discover. Case in point, the spot he lost the 6-pounder.

The area he’s fishing is down near Clayton, New York, and he says it’s just outside two big spawning flats. There’s a hard grass line, and then a bare shelf before dropping off into 35 feet of water, and the smallmouth are glued to boulders on that shelf.

Well, after hitting all the spots he knew about to get up to 22 pounds, he started looking at his electronics and spied something he thought looked intriguing.

“Those Garmin electronics are key because the contour lines are so good,” Shuffield said. “I seen a little spot out on the contour and thought ‘that looks good.’ So, I idled over, and sure enough, it did exactly as the contour showed. It wasn’t a big spot, but it had 10-12 big ones sitting on it. I caught a 4-pounder, jumped off that 6-pounder, broke off another big one and just left. And I found two more of those deals I didn’t fish but marked, and I know there’s more in there. The potential in there is huge.”

Now comes the hard parting – waiting. Though, Shuffield admits he’s happy to have the two days off and even plans to do some fishing in non-tournament waters to “keep fresh.” Still, with what he thinks he has, he’s dying for Sunday to come faster.

“I’m super excited to get back out there,” Shuffield said. “I’m going straight there Sunday morning and I’m not leaving. I really see potential to catch 25-plus in there, and I’m really certain on how to do it.”

Cifuentes Moves on Despite Tough Morning

Joey Cifuentes unfortunately has a bad track record of leading going into the final day of events only to let it slip away. So, as much as he would’ve liked winning his group after leading the first day, he admits he’s not too upset about being able to fly under the radar a bit.

“My goal was to make the Knockout Round,” Cifuentes said. “I mean, I wanted to win, but I’ll be alright. In most of my tournaments I’ve done well, I’m leading it and leading it, and then I do bad the last day. I’d like to try and get in, sneak in there and make the Championship Round to see if I can do something. I definitely have the right fish to do it.”

While many anglers are making long runs, Cifuentes is by far making the longest down to “the line” – the off-limits line right at the mouth of Lake Ontario. He knows the biggest fish live in the lake, and the closer he can be to them, the better.

The issue, outside of spending so much time running limits his time fishing, is that he’s going for a quality over quantity approach. That doesn’t lend itself to many bites, and he admits, there are not near as many fish in his area to begin with. In fact, today he struggled through most of the morning and was stuck on three fish before finally rallying a bit on his way back to weigh-in.

Still, there are no plans to change up strategies now. He’ll be making the long run down to the mouth again Saturday.

“I feel like that area is really good,” Cifuentes said. “There’s solid, quality fish around. There are places I haven’t even fished yet in the area because I’m limited on time. So, who knows? Come Saturday they may be loaded with 6-pounders.”

Louisiana is not exactly a place to learn how to catch smallmouth. Yet, that hasn’t stopped Justin Cooper.

“I just love big brown fish,” Cooper said. “I don’t get to catch them much. We don’t have them back home. So, when I get here I try to catch as many of them as I can to the best of my ability.”

He’s certainly doing that, as he figures he had 50-60 bites today and caught nearly 40 fish. Now, they’re not all big, but he’s weeding through them drift after drift. So, while he doesn’t feel he even really knows how to catch smallmouth, he does know what he’s doing is working. Thus, he has no plans to switch it up Saturday.

Group A Representatives Set for the Knockout Round

Behind Shuffield, pros second through 10th are headed on to Saturday’s Knockout Round against the best from Group B. Sneaking in by a literal ounce in 10th place was Evan Barnes, and notable smallmouth hammers Matt Becker, Kurt Mitchell and Dakota Ebare are also group highlights. The top eight pros in the group all averaged 20 pounds a day, but Becker and Barnes got in with 37 pounds and change, which really doesn’t matter considering the final day of fishing will happen with zeroed weights.