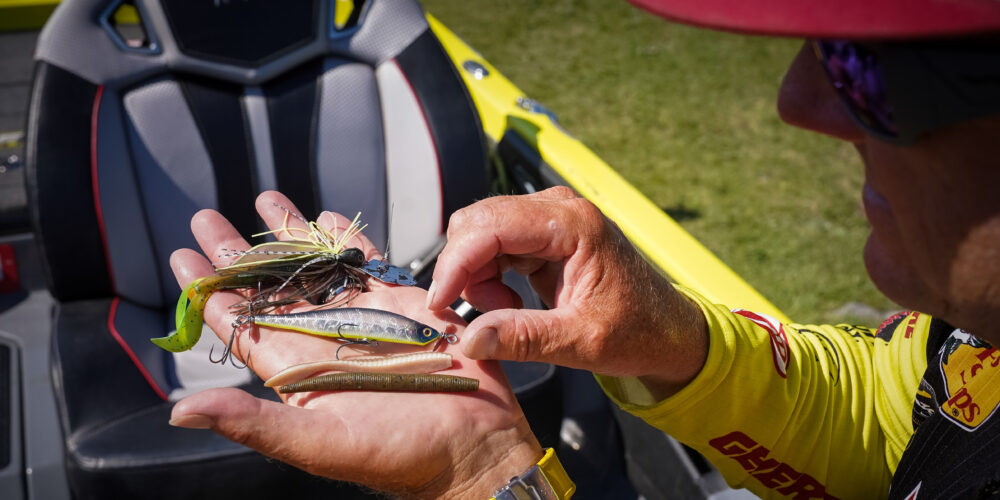 PLATTSBURGH, N.Y. — After a tournament for the ages on Lake Champlain, 2020 Rookie of the Year Kyle Hall came out on top of a stacked field at Covercraft Stop 6 Presented by Wiley X of the Tackle Warehouse Pro Circuit Presented by Fuel Me. Despite an increasingly choppy lake throughout the four-day event, anglers were able to regularly boat bags weighing 20 pounds or better, with nearly all of them consisting of smallmouth.

And while the top Pro Circuit anglers will go on to fish one more event — this year’s Tackle Warehouse TITLE Presented by Mercury at the St. Lawrence River — Champlain served up an incredible final chapter in the 2022 regular season. Here’s how the last pros standing made it to the final day of competition and the 10-person shootout that Hall ultimately won by a single ounce.

1. The newest Pro Circuit champion, Hall relied on a combination of the Berkley PowerBait MaxScent Flat Worm and Strike King 3X ElazTech Baby Z-Too to target bass with a 3/8-ounce drop-shot. Early in the event, he also mixed in a 6th Sense Divine Swimbait. His strategy involved chasing roaming bass with Garmin LiveScope Plus before keying in on them with the drop-shot. The simple strategy proved to be a winning one — by a hair.

2. Jon Canada found schools of perch that he believes fostered larger than average bass. To target them, he used a Berkley PowerBait MaxScent Flat Worm on a 3/8-ounce and a 1/2-ounce drop-shot. Canada paired the bait with 10-pound P-Line TCB 8 Braid and an 8-pound P-Line Shinsei 100% Pure Fluorocarbon leader. When conditions called for a change up, Canada deployed a 3.65-inch Reaction Innovations Shiver Shot.

3. Dakota Ebare gutted it out on stage as the tournament concluded with a weigh-in showdown with his roommate, Hall. Ebare came in just shy of Hall and Canada, but still fished a nearly flawless tournament. Ebare used birds to locate areas to concentrate on, and, like Hall, targeted fish primarily with a 3/8-ounce drop-shot rigged with a Strike King 3X ElazTech Baby Z-Too.

4. Matt Becker quit fishing at 9 a.m. on the first three days of the tournament. He used the rest of the time to go practice, which evidently paid off with a Top 10 finish. Becker could have taken the win had a school of brown trout not run off the bass on one of his prime smallmouth areas on the final day. Still, to get close to the win, Becker utilized a DUO Realis Spinbait Alpha 62 in ghost pearl.

5. “The” Andy Newcomb leaned on trio of baits to get the job done on Champlain. Like most of the field, Newcomb made use of a Berkley PowerBait MaxScent Flat Worm and a 3/8-ounce drop-shot weight; however, he also mixed things up with a homemade, black hair jig that came into play when cloud cover pushed bass into grass. Newcomb also used a DUO Realis G-Fix Spinbait 60 to mix things up.

6. Chalk charismatic cowboy Joey Cifuentes up as another believer in the Berkley PowerBait MaxScent Flat Worm. Cifuentes went so far as to say that he never deviated from the 3.6-inch drop-shot staple. Berkley claims PowerBait MaxScent flavoring increases the lure’s catch rate by 45%, and while those figures seem impossible to prove, Cifuentes says 100% of his fish came to the boat thanks to the bait.

7. By the end of the tournament, Kurt Mitchell was the lone angler fishing the southern end of the lake near Ticonderoga. In between chasing bass on buoys, Mitchell leaned heavily on a grass flat to target roaming smallmouth with a 3-inch Megabass Hazedong Shad on a 3/8-ounce drop-shot and a 3.3-inch Keitech Swing Impact FAT. In addition, Mitchell caught fish on a Yamamoto Senko, a Yamamoto Shad Shape Worm on a drop-shot and a Megabass Vision 110.

8. Oklahoma pro Kyle Cortiana felt like a favorite going into Monday, but fell flat on the final day of competition. Still, throughout the first three days Cortiana was able to boat more than 60 pounds of smallmouth to stay in the hunt until the end. Cortiana says he caught 80% of his fish on a Carolina rig using the YUM Christie Craw.

Cortiana says he caught 17 to 19 pounds each morning on the Christie Craw before culling up using the YUM FF Sonar Minnow on a drop-shot.

9. Alabama angler Alex Davis was on ‘em throughout the event. He could usually be found following bait using a 4-inch Scottsboro Swimbait in a perch pattern. He also deployed a 1/2-ounce drop-shot with an X Zone Hot Shot Minnow in a “309” color. Davis paired the swimbait with 8-pound P-Line Tactical Fluorocarbon and the drop-shot with 8-pound PowerPro V2 Super8Slick Braid to an 8-pound P-Line Tactical Fluorocarbon leader.

10. Skeet Reese was in contention for a top five finish until the steering wheel column on his boat broke on the final day. Reese relied on an unnamed bladed jig with a Berkley PowerBait The Deal trailer in Skeet’s green money color. He also deployed a Lucky Craft Screw Pointer in ghost minnow with a chartreuse belly, and a Berkley PowerBait MaxScent The General on a wacky rig.