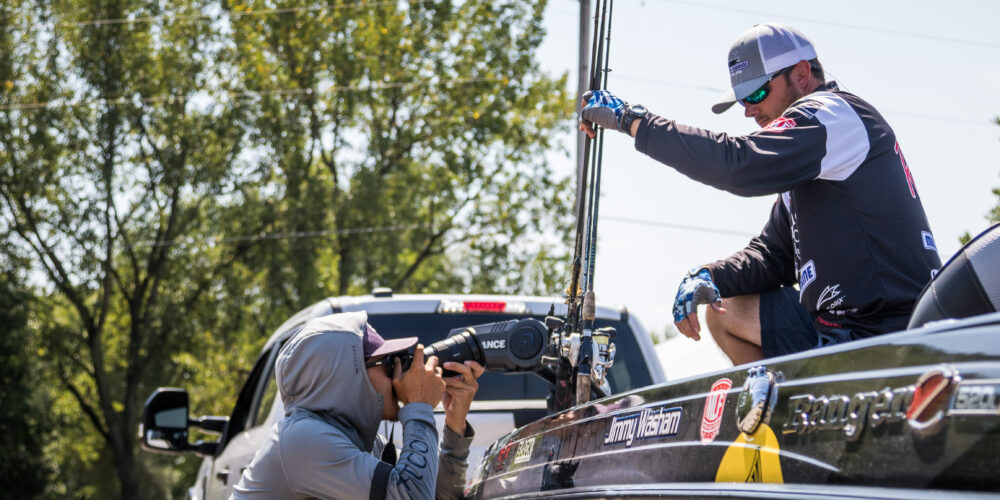 While there were multiple ways to catch bass on the Mississippi River for the Tackle Warehouse TITLE Presented by Mercury, the abundance of shad in the system made the topwater bite – or anything that resembled a shad – the deal. With pools 7, 8 and 9 all represented in the Championship Round, along with smallmouth and largemouth, the baits the Top 10 pros reached for certainly outshined the rest.

Here’s a look at the juice from the TITLE.

1. Jimmy Washam used a slew of baits to target fish chewing on the abundant shad. Everything from a shaky head, to walking baits, to an Azuma Popper Z and a Black Bass Tackle “BRD” Buzzbait with a black toad put fish in the boat. One of his biggest performers on the final day was a Neko-rigged 6-inch finesse worm in black or green pumpkin with red flake thrown on a 7-foot, medium-action Hammer Rod with 10-pound braid and fluorocarbon and a Gamakatsu G-Finesse Weedless Wacky Hook with a 3/32-ounce nail weight. However, his top producer was a 15-year-old Heddon One Knocker Spook in a color called “I’ve caught 10,000 fish on it,” which he threw on a 7-foot, 3-inch, medium-heavy Hammer Rods Crankbait Rod with 40-pound braid and a 15-pound mono leader.

2. Bobby Lane worked sand drops and cut bank with a bit of everything for his runner-up finish. A Berkley PowerBait MaxScent The General, Berkley Choppo, Berkley Cane Walker and a Z-Man Evergreen ChatterBait Jack Hammer Stealth Blade with a Berkley PowerBait Grass Pig Jr. trailer helped haul both largemouth and smallmouth to the scale.

3. Posting another Top 10 on the Mississippi River, Zack Birge did 90 percent of his damage on a weightless white pearl shad Googan Baits Dart thrown on his signature 7-foot, 1-inch, medium-action Favorite Rush spinning rod, which was spooled with straight 15-pound Yo-Zuri SuperBraid.

4. Mitch Crane locked a frog in his hand and never looked back. Fishing in Pool 7, Crane threw either a brown LIVETARGET 65T Hollow Body Frog or a piranha-colored SPRO Bronzeye Frog, which his daughter, Bella, signed for good luck.

5. Skeet Reese kept the Top 10 train rolling thanks to a “mixed bag” of baits. A Lethal Weapon swim jig, a white buzzbait with a 4-inch Berkley PowerBait The Deal trailer (silver flash) and a Berkley PowerBait Ca$h Out Worm on a Ned rig were staples on his deck throughout the event.

6. Topwater was the name of the game for Joshua Weaver’s solid finish to end the Tackle Warehouse Pro Circuit Presented by Bad Boy Mowers season. A Heddon Super Spook Jr. and a SPRO Bronzeye frog helped him catch fish feeding on shad around grass in Pool 8. For the Spook, a 7-foot, 2-inch, medium-heavy Favorite Hex with a 7:3.1 Favorite Soleus XCS reel spooled with 40-pound braid was the deal. When it came time to frog, a 7-foot, 3-inch, heavy Favorite Rush got the nod.

8. Utilizing a small portion of the Black River throughout the event, Jimmy Reese used a Neko-rigged Yamamoto Senko (green pumpkin red and black flake), which he threw on a 7-foot, 2-inch, medium Douglas DXS XMartix rod with a 12-pound Yo-Zuri Top Knot 100% Fluorocarbon leader and a 30-pound Yo-Zuri SuperBraid main line for a good portion of his catch. Reese also caught some fish on a white frog and buzzbait in the afternoons each day.

9. Justin Lucas stayed close to La Crosse for the majority of his fish each day with either a Berkley J-Walker or Cane Walker leading the way, though a drop-shot with a 6-inch worm also helped convince reluctant bass to bite. His topwater setup was a 7-foot, 4-inch, medium-heavy prototype Abu Garcia topwater rod with an 8.0:1 Abu Garcia REVO STX reel spooled with 30-pound Berkley X9 braid and a 17-pound monofilament leader.

10. Adrian Avena focused heavily on areas with schooling fish for his finish. While he employed a lot of baits, a Berkley Choppo, Cane Walker and Drift Walker were hard to beat. For his topwaters, Avena ran Abu Garcia REVO Rocket reels spooled with 40-pound Berkley X5 braid.