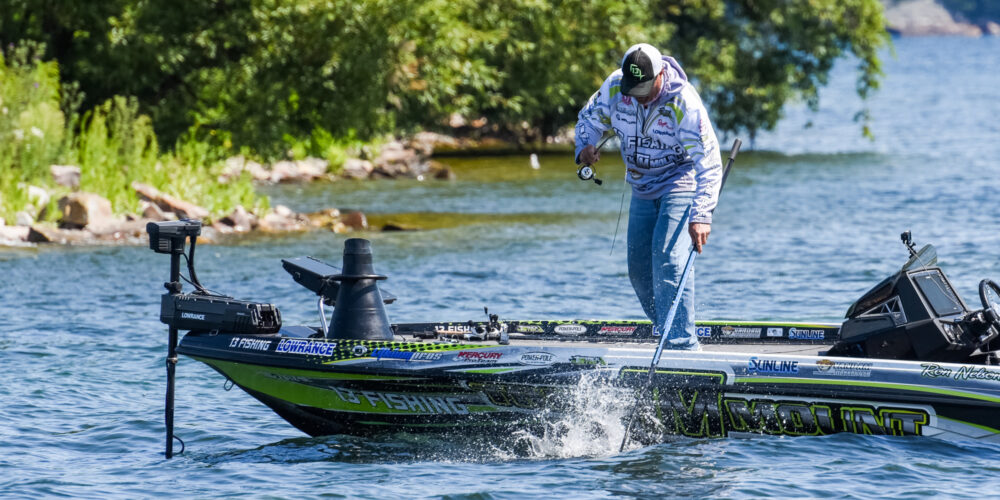 It’s the most obvious question: Can anyone catch Joey Cifuentes? On a fishery like the St. Lawrence River, anything is possible.

After three days of fishing for the Tackle Warehouse Pro Circuit Presented by Bad Boy Mowers event, Cifuentes has distanced himself quite nicely from the field. But he’s yet to have a day where he’s stubbed his toe like many of the other pros right behind him. If Cifuentes stalls a little, there are some serious smallmouth hammers right there to try and steal the win.

Regardless of his knowledge, the deep pattern is working, as his area is the first deep place smallmouth could congregate after spawning in nearby areas. Now, he admits he did have to adjust today, as the sun and lack of wind meant his fish had slid out a bit further on the structures he fishing, but they’re definitely still there, especially on one of his spots.

“I have one spot I’ve caught my five biggest fish this week,” said Pike. “If I could get five bites there tomorrow I don’t know what could happen. I could maybe make a run at this thing.”

Few anglers had been getting as many bites this week as Matthew Stefan … until today.

“I got a lot less bites today, and that has me a little concerned,” Stefan admitted. “I only had nine keepers, but I’d like to be getting 30 bites like I had.”

A big reason for the dropoff in action, he says, was the fish didn’t go in the afternoon like they had the previous two days. Yet, the quality is still there, as he lost another 5-pounder today that would’ve culled a 3-pounder.

Of course, with how far back he is, he admits he may swing for the fences tomorrow.

“I might do an audible and go to the mouth of the river,” Stefan said. “I have one flat that if they’re there I can catch 20-plus pounds, but if I get down there and they’re not … I have nothing. I’ll go largemouth fishing. So we’ll see. Tomorrow we’re fishing for cheddar.”

Smallmouth are moody fish, and Ron Nelson apparently was around some of the moodiest today.

While he had been fishing around Clayton and then heading to Cape Vincent the first two days, today he decided to try and give himself more time and fish a bit more upriver. What he found was a lot of frustration.

Whether it was losing a pair of 5-pounders or having fish follow his hair jig in and spook once they got close to the boat, Nelson just could never seem to get in a rhythm to really make a run at catching Cifuentes today despite still managing to get the bites to try. And he tried just about everything, from fishing bedding fish to hitting deep drops, the fish were there but just never cooperated. Actually, neither did his boat, as he slung an ear on his prop on his way in but fortunately was able to replace it in time for him to reach check-in at 2:59 p.m.

As for tomorrow, with the rain, he may switch things up completely to a spinnerbait and a jerkbait to see if he can make a run.

“I just don’t know,” Nelson said. “I really thought this tournament would be a deep tournament, but I don’t have any mega schools. So, we’ll see.”

If you watched him during the Bass Pro Tour event a few weeks ago, then you know where and how Skeet Reese is catching his fish. Honestly, not much has changed.

Fishing a shallow flat 75 miles from takeoff, Reese is using a one-two punch of a Lucky Craft Pointer 78 DD in Table Rock Shad to cover water, and a 4-inch Berkley PowerBait MaxScent The General in green pumpkin to pitch to fish he sees follow the jerkbait or just cruising around.

The result were some solid bags the first two days, but today he exploded for 24 pounds. Why?

“Better conditions,” Reese said. “These smallmouth love sun, and the calmer water, I was able to fish more efficiently. It’s funny. I fished all the same stuff the last couple days and never caught a 4-pounder. So today, to catch 24 pounds is like, ‘OK?!’”

The amazing thing is, today Reese saw some fish pushing 6 pounds cruising in his area that could allow him to replicate today or more tomorrow. However, he admits tomorrow will be a bit bittersweet.

“My main goal of Angler of the Year is done and gone,” Reese said. “I flew back in here from Italy just to have a shot at that, but Michael Neal wrapped that up. He had a great tournament. And I’m way behind Joey. So it’s kind of anti-climactic now.”