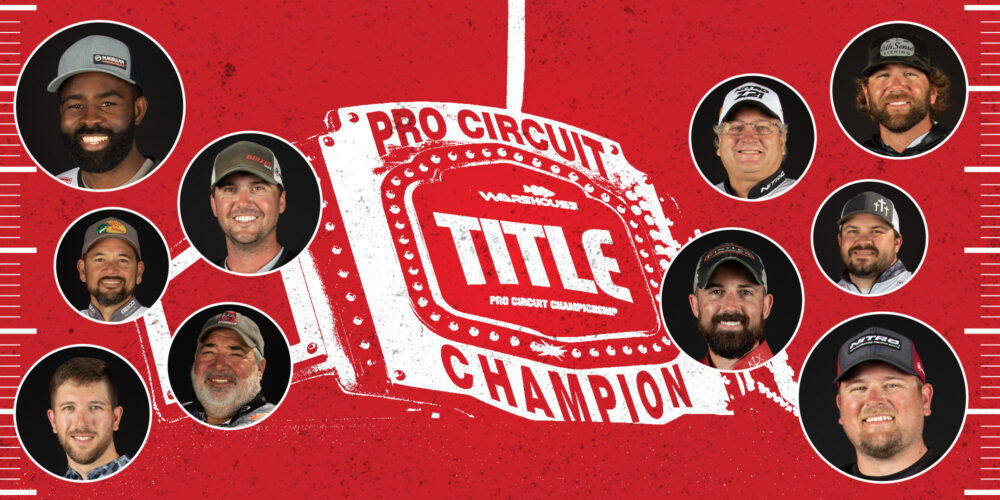 The TITLE field will be composed of the top 48 pros in the AOY standings along with 2020 AOY Ron Nelson and 2020 TITLE champ Rusty Salewske to bring the field to an even 50. However, both Nelson and Salewske are inside the 48 cut currently and are likely to stay there, thus double-qualifying, which means the top 50 in the standings will advance to the TITLE.

So, with that in mind, here’s a look at some of the pros above and below the 50 cut that will have their work cut out for them at Savage Arms Stop 6 Presented by Abu Garcia to ensure a TITLE appearance happens.

Looking at the standings from 40th to 50th gives a decent buffer of pros who are on the positive side of the bubble to make the TITLE. The interesting thing about this crew is that a lot of them have limited experience with either smallmouth, the St. Lawrence or both. Now, the St. Lawrence does have some solid largemouth fishing, though it pales in comparison to the smallmouth fishery and may not be able to produce the kinds of finishes pros in this category need in order to stay on the right side of 50th place.

Sitting in 50th with 664 points and first on the chopping block is veteran pro Matt Reed. The issue for Reed is that the Texas pro does just fine around largemouths, but his record in smallmouth country isn’t the best – especially for someone sitting on the line to make the championship event. Reed has had some solid finishes on St. Clair and Erie throughout his career, but the St. Lawrence has been a bit of a thorn in his side, despite it being one of his favorite places to fish. The fact he’s been on the St. Lawrence before is huge this time though, considering it’s a leg up on the majority of the field, but he’ll likely need to bank his best finish yet on the river to make the TITLE.

Also sitting with 664 points, Mitch Crane is in 49th and needs to make some magic happen. Crane competed in the recent Bass Pro Tour event on the St. Lawrence, so at least he’s got some extra scouting in on the river, but like Reed, he’ll need to step his game up to stay inside the cut.

On the slightly safer side of the bubble, Alex Davis (40th) will be making his first-ever trip to the St. Lawrence. Aside from the obvious disadvantage of having never seen the fishery, Davis also has a rocky relationship with smallmouth. However, if he can rekindle the flame from last year’s TITLE on Sturgeon Bay he’ll be just fine.

Moving down, Brian Latimer (41st), Kevin Martin (42nd), Josh Bragg (43rd) and Cody Pike (44th) are mostly largemouth guys looking to take advantage of some of the best smallmouth fishing in the country to punch their TITLE tickets. B. Lat hasn’t fished this part of the St. Lawrence and Bragg will be new to the St. Lawrence, but both are quick studies and have been on a good roll as of late, so if they keep it going they should be on their way to La Crosse, Wisconsin, this August. Pike and Martin on the other hand are two pros that actually have a fair amount of experience on the St. Lawrence. While their tournament results may not show it, both guys have spent several years on the river and there’s no better time to have your best tournament on a fishery that’s treated you rough over the years than now.

Miles Burghoff (45th), Dicky Newberry (46th), Jesse Wiggins (47th) and Evan Barnes (48th) round out the rest of the pros above the cut, but again, fall in the category of lacking experience up north. Wiggins by far has the most St. Lawrence know-how and a track record that could be well suited to send him to the TITLE. Burghoff has a good understanding of finding and catching smallmouth, so he seems to be in a good position to have a solid tournament. Barnes has had an interesting relationship with smallmouth over the years, but since his ninth-place showing at the TITLE last year he seems to be on good terms, especially since they helped him win a Toyota Series event earlier this year. That leaves Newberry, who will be out of his element. However, Newberry is a fantastic offshore angler so you can’t count him out completely.

Matt Stefan is the first man out of the cut in 51st, yet likely stands the best chance of any of the guys immediately below him to make it to the TITLE, especially considering he’s only one point behind Reed. The Wisconsin pro is a smallmouth savant and has the added motivation to make it to the Mississippi River for the TITLE where he’d be one of the most experienced anglers in the field.

On the heels of Stefan are James Niggemeyer (52nd) and John Hunter (53rd) who both have St. Lawrence experience, yet rollercoaster relationships with smallmouth-dominated fisheries. That said, Hunter banked a Top 10 in the Toyota Series back in 2018 by running to Lake Ontario from Clayton. That won’t be on the table this time, but the river proper might treat him just as well.

Eyeing up the rest of the pros on the bubble cut gets a bit blurrier. Jimmy Reese (54th), Blake Smith (55th), Kyle Gelles (56th), Kyle Cortiana (57th), Jamie Horton (58th), Jared McMillan (59th) and Jason Reyes (60th) aren’t exactly brown fish specialists and for the most part, lack experience up north. Gelles hails from Idaho and boasts the best skillset to mine St. Lawrence brown. Coming fresh off a win as a Strike King co-angler in the Toyota Series event on Lake Champlain, he may have the best momentum to make a run at making the cut.

Nearly 100 points behind the 50-cut, Chase Serafin (61st) and Kyle Hall (62nd) are maybe two of the most dangerous smallmouth sticks that could really make some noise. Both Serafin and Hall are dialed when it comes to catching smallmouth having put plenty of time in perfecting their craft around the north country and Great Lakes. Serafin hails from Michigan, so he’s essentially a smallmouth expert by default and his college and 2020 Toyota Series record backs that up. Meanwhile, Hall calls Texas home, though he’s spent the last few summers on the St. Lawrence and other smallmouth factories learning the ropes. It paid off for 2020 Polaris Rookie of the Year back in 2018 when he won the Toyota Series event on the St. Lawrence and most recently, he made a Top 10 on Champlain, so the kid has the right stuff in order to make a Top 10 – or better – on the St. Lawrence happen.

While it’s less likely someone from farther back makes a run at the TITLE slots, you never know what can happen on a place with so many 4- to 6-pounders. Still, the beautiful scenery of the St. Lawrence seems to make it the perfect venue to put a bow on the Pro Circuit season and giant bags of smallmouth are a guaranteed cherry on top.