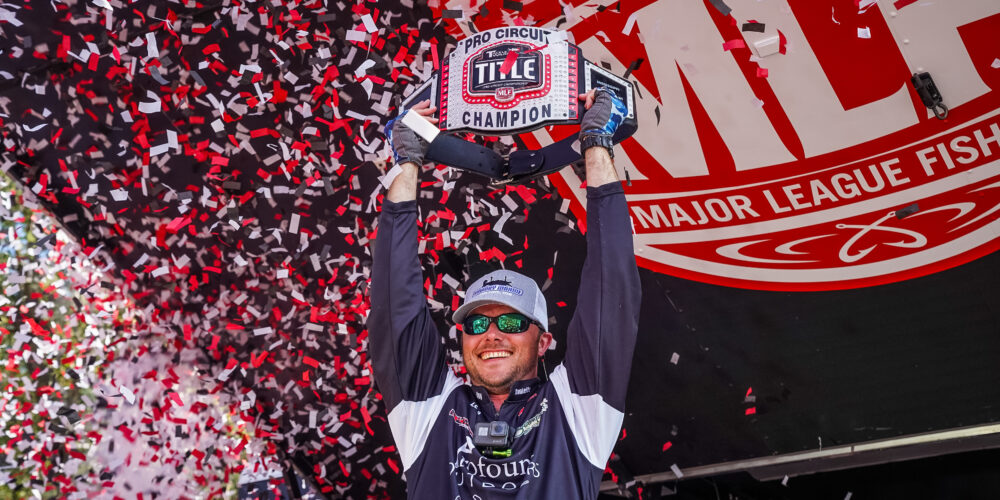 LA CROSSE, Wis. – In 2020, Jimmy Washam started fishing the Tackle Warehouse Pro Circuit Presented by Bad Boy Mowers after qualifying via the Toyota Series Central Division. Then, he was in the running for Polaris Rookie of the Year most of the way and fished the Tackle Warehouse TITLE in his first season, doing basically everything you could ask for in a rookie year.

This year has seen Washam take it to the next level, with a Toyota Series win on Lake Guntersville, a fifth-place finish in Angler of the Year on the Pro Circuit and a dominating Championship Round win in the second-annual Tackle Warehouse TITLE Presented by Mercury. Putting 17 pounds, 15 ounces on the scale, Washam beat out Bass Pro Tour superstars Bobby Lane and Zack Birge to earn $200,000 and the TITLE belt.

“All the glory goes to God,” Washam said of the win. “This is so amazing, but it’s His work above, I promise you. Five years ago, I bought my first fiberglass boat and decided I’d fish the [Phoenix Bass Fishing League] as a boater. Now I’m standing here with a TITLE belt on my shoulder.”

A deputy sheriff sergeant in Tennessee, Washam took a big financial risk in 2020 and did it again in 2021 after losing his title sponsor right before the season started. Now, he’s gone from a kid ate up with fishing to a TITLE champ.

“I’m 34 years old, I did not start as young as I wished I would have, but I had to earn a living and work, and I slowly progressed and stepped up to this level,” Washam said. “After last year I knew that I could hang, after this year, it’s been an absolutely incredible year. It’s humbling to know the group of anglers I just joined.”

Washam tallied 25-1 (10) in the Qualifying Round to make the Knockout Round out of Group A. In the early going, he caught all his fish in the Black River, but that well started to dry up during the Knockout Round.

“There were a lot of guys from Group B fishing in my same area,” Washam said. “I felt like it was dying, I culled four times after I had my limit in the Knockout Round and I had 8 ½ pounds. I said ‘I’m not gonna sit up here and die.’”

So, he didn’t, rolling down the river to a backwater directly off the main drag where he’d caught a few good ones in practice.

“I wanted to give myself a chance,” Washam said. “I thought it would take a miracle to grind it out in the Black River and qualify. Then, I would be pretty much hopeless going into Championship Sunday.”

Diving into the backwater, Washam knocked around with a frog and a few other baits in the grass and duckweed with no results. Then, he eased back out to the mouth.

“I remembered there being a rock ridge at the mouth of it,” he says. “I was pulling out of it, I decided to hit Anchor Mode near the rock ridge. The backwash from my trolling motor threw a swirl up on the ridge, and big shad started jumping and a bass ate one. I pulled out a walking bait and in five casts I had a 5 and a 4 ¼. I went to 14 ½ pounds in a blink of an eye and saw a bunch more fish rolling.”

With that, Washam finished third in the Knockout Round and set himself up for glory.

Owning the Championship Round

With weights zeroed on the final day, Washam went all in and it paid off.

“I was contemplating going to the Black River, because I had a couple places I could pull up, hit Anchor Mode on my Lowrance Ghost and catch a limit in just a few casts,” Washam said. “I got to thinking, it’s Sunday, there’s a lot of guys out fishing, I’ve got a place that likely has the wining bag on it. Why in the world would I not go there first? Literally, as I pulled up, there was a guy in a Jon boat that was slinging a topwater and he was like a half a cast away from my fish. I don’t think he knew what was there, but he was really close to finding out.

“He was a total class act,” Washam said. “I pulled up and said, ‘Good morning.’ Of course, I was going to ask him as politely as I could if he minded giving me a little space for a couple hours. I didn’t even have to ask, he picked up the trolling motor and left. He came back as a spectator later, and come to find out, he works at the sheriff’s office in La Crosse.”

“I was confident, any time you find something like that and you’re able to leave it for Championship Sunday it’s great,” Washam siad. “But, I’ve played this game long enough to know that there are so many variables. When I made the first cast and didn’t get a bite the wheels started turning. Then, when I made the second cast and caught a 3-pounder I was pumped.”

The rest of the day, Washam picked away to land the biggest bag of the tournament and take home the win.

Putting Them in the Boat

In the Black River, Washam used a slew of baits to target fishing chewing on the abundant shad. Everything from a shaky head, to walking baits, to an Azuma Popper Z and a Black Bass Tackle “BRD” Buzzbait with a black toad put fish in the boat.

At his winning area, Washam targeted bass set up in shallow water on a rock ridge with meandering current that was close to deep water. Chasing big shad, they proved fairly difficult.

“Everybody says that northern fish are easier to catch, but here they’ve gotten tricky, hard to catch,” Washam said. “This morning, I started out with a walking bait, and I figured out a little cadence to make them eat it. I would speed it up, and then kill it, and walk it almost as slow as I could, and then speed it up again. Every time I would get in the juice and slow it down, one was going it eat it and I’d actually catch them. With just a normal retrieve, they’d come up behind it every time.”

Throwing his topwater on a 7-foot, 3-inch, medium-heavy Hammer Rods Crankbait Rod with 40-pound braid and a 15-pound mono leader, Washam relied on a few different baits. However, his top producer was 15-year-old Heddon One Knocker Spook in a color called “I’ve caught 10,000 fish on it.”

After the topwater bite waned, Washam broke off a shaky head in the rocks a few times and then turned to a Neko rig.

“The first cast, before it hit the bottom, I caught one, and that’s what I ended up doing most of my work with,” Washam said.

Using a 6-inch finesse worm in black and green pumpkin with red flake, Washam used 10-pound braid and fluorocarbon on a 7-foot, medium-action Hammer Rod with a Gamakatsu G-Finesse Weedless Wacky Hook and a 3/32-ounce nail weight. Able to fish the light bait over the rocks without hanging too much, he used a spinning rod to catch his biggest bass of the day.

Working almost all day to catch his total weight, Washam came back to weigh-in a bit early, knowing he’d some something special.

“My second biggest fish seesawed me around something on 10-pound line,” says Washam. “One of the big ones I caught on the topwater had just the back hook. It was an incredible day, for sure. I think I made the comment yesterday that spot reminded me of the Tennessee River, what I found, that’s a Tennessee River bag that I caught in Wisconsin. On Day 6. Of the TITLE.”