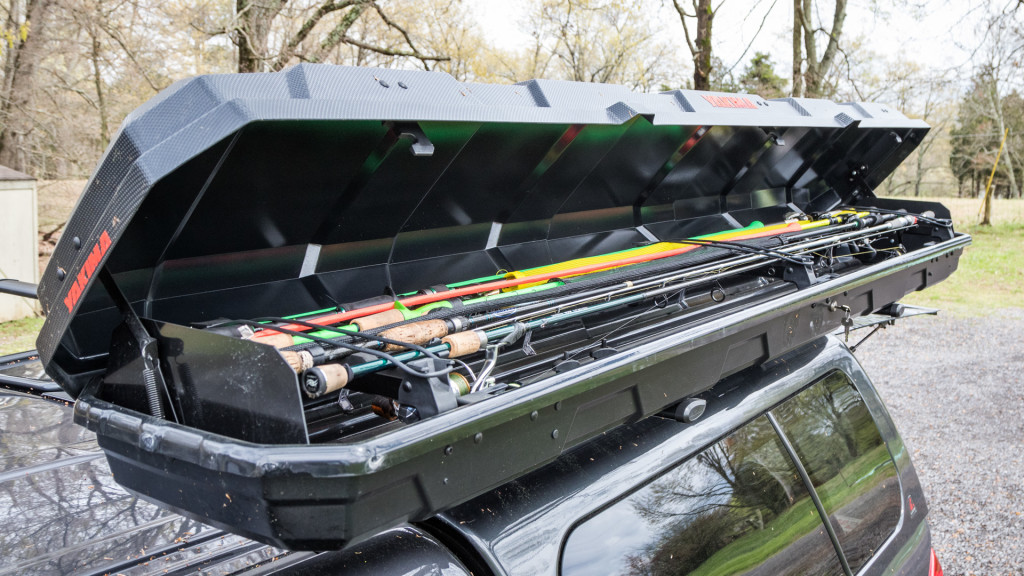 As is typical for someone who works in the tournament bass business, I do a fair amount of traveling every year. Unlike the bass pros I work with, I generally don’t haul a boat with me. So, in the past, when I wanted to pack along a few rods, I either had to run them between the front seats of my Toyota Tundra or haul them in the truck bed, which is one of the fastest ways I’ve found for busting a rod tip or having your gear stolen.

Last fall, I upgraded my system when Yakima provided a new TopWater rooftop fishing rod box for review. The TopWater retails for $549 and has more bells and whistles than most of the other rooftop rod storage options out there. For some anglers, those extras would be much appreciated and worth the money, but for others they might be overkill.

Here’s what I’ve learned about the TopWater. 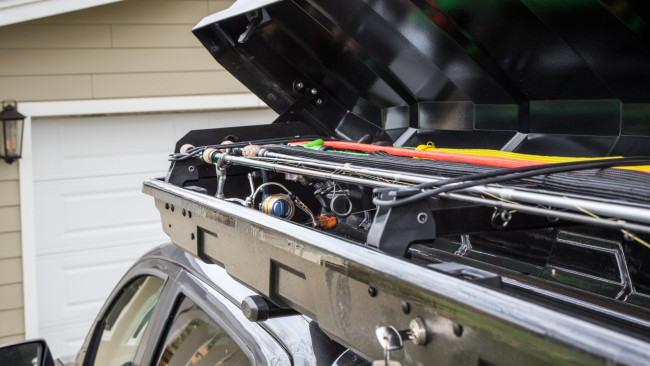 I still haven’t come up with a clever go-to response for when people ask me what that “thing” is on top of my truck when they see the TopWater at gas stations. I was calling it a rocket launcher, but nobody really laughed at my joke.

At 9 inches deep, 18 inches wide and 8 1/2 feet long, it’s definitely bigger than most other rooftop rod storage systems – most are plastic tubes – but it’s also designed for a slightly different purpose. Tube-style rooftop storage units hold bare rods that are slid in from the end. The TopWater, which has a hinged lid like on a gun case, opens up to hold rod-and-reel combos, with dual hinge stops on the ends to keep the wind from blowing the lid all the way back.

Also like a good gun case, the TopWater has an integrated lock. When the key is turned, two steel bars slide into place, locking things down tight and secure. 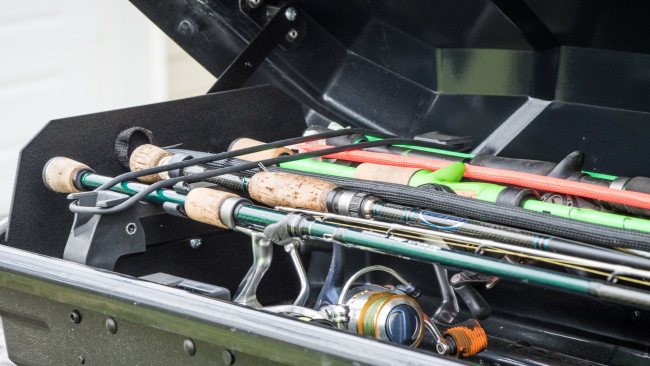 Three elevated rod storage racks spaced throughout the box are lined with foam dividers that cradle up to eight combos and rods up to 8 feet long. A rubber strap on each rack does a really good job of holding the rods in place.

Combos get arranged in place butt-to-tip. It’s easiest to put them in starting from the back or hinge side and working toward the front edge. Adding or removing one from the middle sometimes takes a little fenagling, though it’s not at all hard. Rods definitely settle into place a little easier without protective sleeves, but I usually opt to leave the sleeves on anyway.

Despite driving about a hundred miles on bumpy gravel roads in northern Wisconsin last fall and way too many highway miles since then, I haven’t had any rods jump off the rack in transit. I have had some baits pop loose from the rods’ hook hangers. That’s mostly a problem for baits tied to braided line and could easily be remedied with a bait wrap or by cutting baits off before loading up. 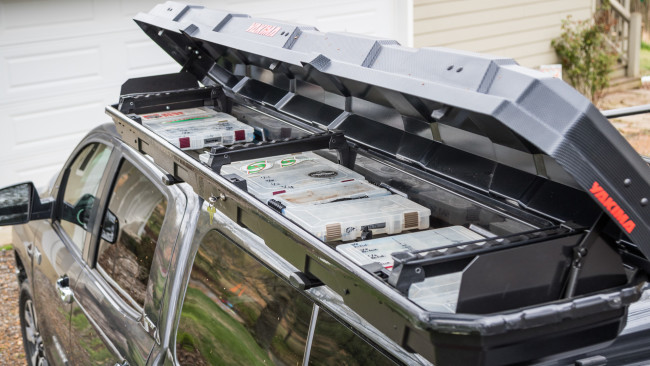 The rod racks can be removed to haul other gear by backing out a few screws, which is a nice design feature and helps justify the $549 price tag. There’s also room for storing some other essentials under the rods. I can fit 11 3600 Plano StowAways under the rod racks if I pack them in and don’t have any spinning reels hanging down (though, I think you could flip the reels up somehow and get it to work). The 3700 boxes drop in OK, too, but you have to shift them around to find the best fit. Realistically, I wouldn’t store more than a few StowAways on the bottom. You could also slide in quite a few extra rods without reels if you need to really haul a bunch, though I haven’t bothered with that.

Be aware that there are open holes in the bottom of the TopWater to let moisture out. They also let moisture in. So whatever you store inside needs to be watertight or safe getting wet.

This is a bit of an issue with tackle that’s left on the rods. I left several rods rigged and ready in the TopWater for up to a couple weeks, and the terminal tackle on some baits started to rust. Any hooks rigged with soft plastics (like my rigged and glued Ned heads) were guaranteed to rust. I even had a bit of corrosion on a metal component on one of my rods. The obvious fix is to cut baits off before stowing if the rods are going to be in the TopWater for more than a short trip, or to take everything out of the TopWater between trips. 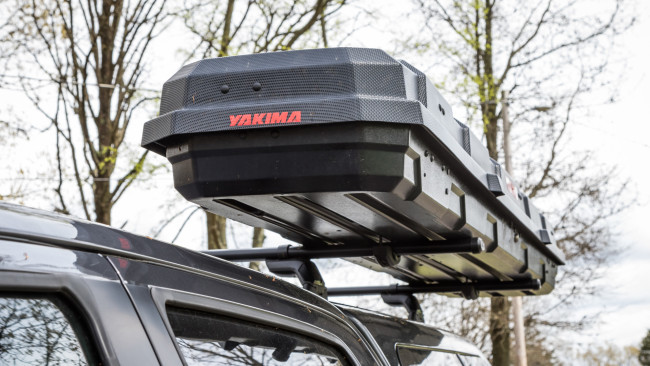 The outer shell is made of the same lightweight, durable plastic material as many of Yakima’s other rooftop storage products. I’ve toted it around the country and parked my truck outside with the TopWater installed almost every day since September, and the plastic hasn’t faded or shown any wear.

When I first unboxed it, I thought the plastic was too flimsy to withstand 80-mph rips down the highway, and I was very wrong about that. Once you turn the key over in the lock, the locking bars slide into place and cinch things tight. It’s surprisingly rigid, and I really don’t think a thief could break in unless he was some sort of Houdini lock picker.

The plastic does a good job of shedding bugs and other road grime, too. I don’t even wash it. A heavy rain does the work for me.

I do notice a little bit of rattling when I drive with the windows down on gravel roads, but that’s not an everyday thing for most people. 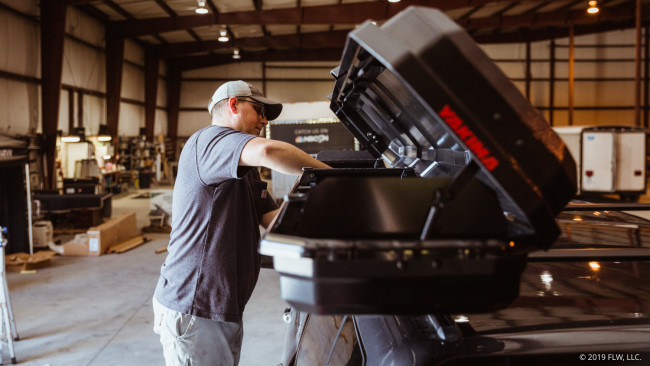 Installing the TopWater is dirt simple if you already have a roof rack on your vehicle. Just make sure you have the right hardware. You can check this on Yakima’s website. If you don’t have a roof rack, the company sells options for any type of vehicle on the road. They also sell riser kits for trucks without toppers if you like that “overlanding” look.

I mounted the TopWater to the Yakima SkyLine system fitted with Yakima’s CoreBar crossbars. A pair of brackets pass through the open slots in the bottom of the TopWater and draw tight against the crossbars to hold everything in place. Each bracket has a pair of easy-to-grip, oversized plastic nuts that can be turned down by hand. It’s a dirt-simple system, which means it’s a good system.

If you want to remove the TopWater, just open the lid and loosen the nuts. The way my crossbars are configured, I’m able to slide the whole thing off the ends without fully removing the nuts (there’s a lot of thread on them), but that won’t work on some roof racks. Re-installing is as simple as working the process in reverse. It’s an easy one-person job since the TopWater only weighs about 31 pounds. 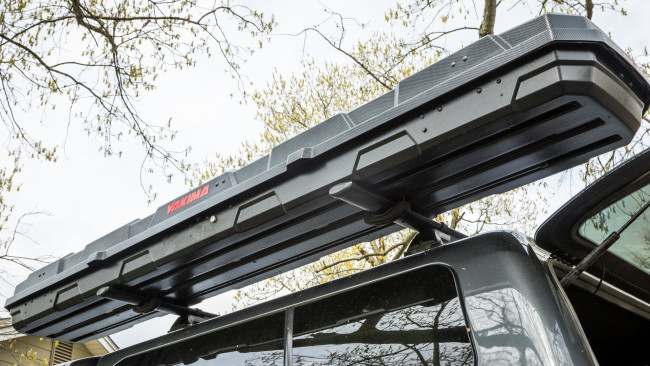 It’s way up there

My biggest beef with the TopWater is really a beef with the height of my truck and my genetics. I’m 5 feet, 11 inches tall, and when the topwater is mounted in place and open, the front edge is 6 feet, 10 inches off the ground. I can reach up high enough to unhook the rubber straps and get the front rod or two out without needing a boost, but I can’t reach the rest of the rods.

Car owners won’t have the same issue, but there’s really no way around it when stowing gear on top of a full-sized truck or SUV, no matter what style of storage unit is being used. Also, I keep my truck parked outside. If you park in a garage and have a low overhead door, you might not fit through with the TopWater in place. Again, this is an issue with any rooftop storage unit and something you’ll have to figure out on your own.

To make life easier when I’m at home, I load rods with a step stool. At the lake, I’ve found it easiest to stand on the tailgate or open the rear driver’s side door and climb up. In either case, I can get rods in and out from one end of the TopWater, but I can’t reach all three rubber straps, so I usually undo them from the ground first.

Depending on how you want to access the box, you’ll want to tweak where you mount it on the crossbars. I originally had it as far to the driver’s side edge as I could get it (that’s how it is in the photos). When using a step stool, that’s the best place for it. If you’re standing on the tailgate, however, having it that far over requires a little bit too much of a reach. Shift it a little farther toward the center of the truck for easier access. 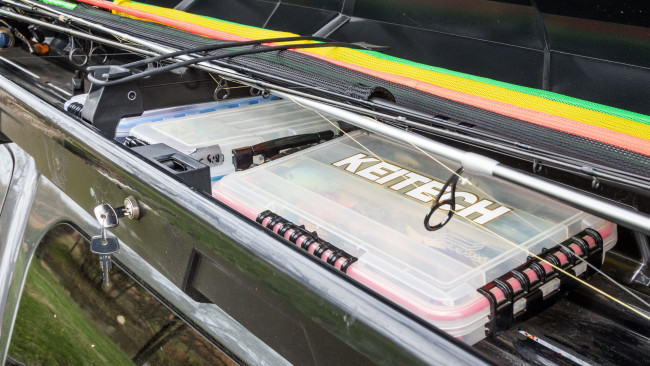 At $549, the TopWater isn’t cheap. If you have enough rod storage in your boat, this is a luxury item that you could live without. Then again, because it can be configured to haul other gear, you might still give it a look.

Rod tubes are definitely another option. A DIY rod tube would certainly be much more affordable, but some of the commercially available tubes cost about as much as the TopWater and don’t hold combos. Which one you might choose depends on what style of fishing you enjoy.

For any hard-core canoe or kayak angler, the TopWater would be the cat’s meow for sure. With three components – 1) a high-quality roof rack, 2) a rooftop canoe or kayak mount, and 3) the TopWater – everything needed for a fishing trip could be stowed on top of the vehicle, leaving room inside for whatever else you need to haul. Granted, that’s a lot of money to invest to get set up (a good roof rack is surprisingly expensive), but it’s still a lot less than the cost of a bass boat.

John boat anglers and small boat anglers will probably appreciate the TopWater, too, since it allows them to haul extra combos and keep them locked up tight.

I also think this is a great option for traveling co-anglers. Six to eight combos rigged and ready to go is plenty for any co-angler, and a few extra specialty sticks could be stored under the combos just in case.

Personally, the TopWater has been super handy for me on road trips. It keeps rods out of the truck cab and bed, where I’m hauling anything from camera gear and suitcases to dog kennels and car seats. Now I almost never go anywhere without putting a few rods in the box, just in case I get a chance to do some fishing.

The best part is, they’re safe and secure, and that’s exactly what you want from a rod storage product.