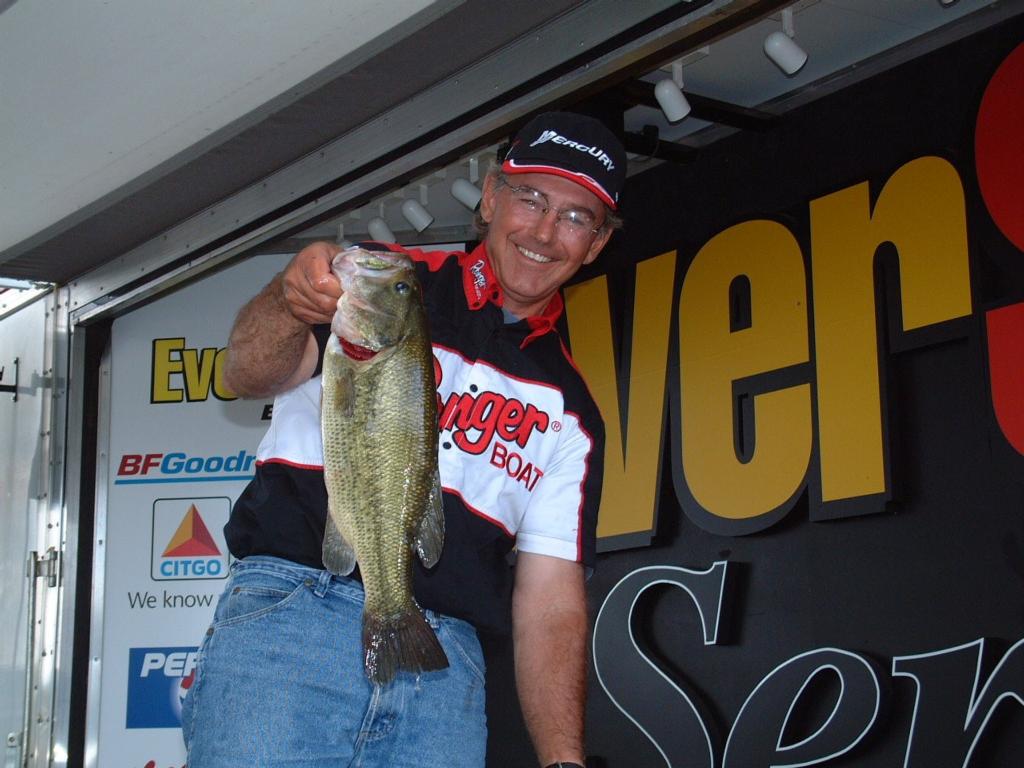 LA CROSSE, Wis. – The water changes. So does the weather. But one thing remains the same in pro bass fishing: It’s always a good idea to keep your eye on the local anglers – especially if they’re all using the same bait.

On a day when the river was rising and the weather was a little weird due to unpredictable winds, Monsoor found a way to trick a few fish into biting. His secret weapon: a homemade black-and-blue jig. He calls it Tom’s Swimming Jig. It’s a lure he made himself and has used in tournaments for about 12 years.

“You can throw it into anything,” he said. “It’s a weedless jig. That’s the secret.”

Said Monsoor, “Guys are always asking me for it and I don’t give it to anybody – except those two guys.”

Those two guys are Douglas Stanton and Darren Zumach, two other pros who made today’s top-10 cut and qualified for the final round by also using Tom’s Swimming Jig. Monsoor said he didn’t mind that Stanton (who hails from Winona, Minn., just upriver from La Crosse) and Zumach (from Onalaska, Wis., just east of La Crosse) used his secret lure today. They’re all basically part of the same fishing circle in the Mississippi River Valley.

In fact, Stanton, who placed fifth with five bass weighing 11 pounds, 6 ounces, sort of pulled a sneaky Pete on Monsoor to get his hands on the coveted jig earlier in the week.

“The Minnesotan sent his little boy over and asked to buy one for a dollar,” chuckled Monsoor. “So I gave him a few of them and told him, `Don’t let your dad use these.’ You should have seen (Stanton’s) face when he came in and said he caught a 5- and a 4-pounder with my jig.”

Tomorrow Monsoor, who caught eight keeper bass today, plans on employing a simple strategy to outfox Stanton and Zumach as well as the rest of the field in Saturday’s final round.

Hayes airs it out to capture co-angler lead

It’s not every day that a southern angler comes north and raves about how many fish he’s catching. But James “Pete” Hayes of Liberty, Ky., who qualified in the top Co-Angler Division spot today with five bass weighing 10 pounds, 11 ounces, did just that after today’s semifinal round.

“I’m from the (BFL) Mountain Division,” he explained. “If we get one bite we’re doing well. I’ve done caught more up here in three days than all year down there. I’ve caught 50 to 60 fish the last three days.”

Today started slowly for Hayes, however. By lunchtime, he only had one keeper bite to his name. Then as clouds started rolling in and fighter jets from a local air show started buzzing the Mississippi River Valley, he landed four good keeper bass shortly thereafter.

Hayes, whose son Jeremy is ranked second in the 2001 Mountain Division standings, credited his pro partners as well as his ability to focus even under changing conditions for his success throughout the week.

“I’ve been working on that,” he said of his concentration.