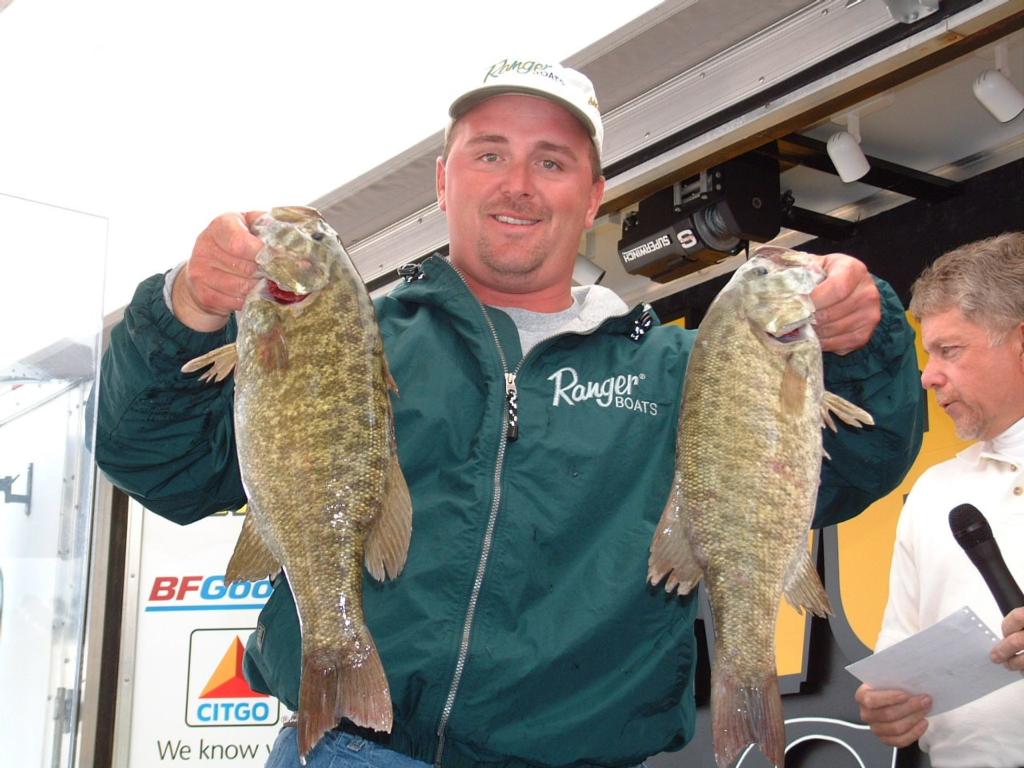 DETROIT – Day two of the final Northern Division tournament of the year proved to many here on Lake Erie that perseverance pays off. While steady Koby Kreiger maintained a firm grip on first place in the Pro Division with a five-fish performance that weighed 18 pounds, 6 ounces, a number of other pros who either zeroed or nearly zeroed on day one found themselves placing in the top 30 and making the semifinal-round cut on day two.

The weather changed a little bit in Detroit today and so did the fishing. While it still wasn’t a tropical paradise over Lake Erie, the sun made sporadic appearances and, more importantly, the wind died down some. That left anglers more room to roam and find their fish – and it showed in the results. Several anglers who laid a goose egg yesterday, like 30th-place Neil Vandebiezen of Portage, Mich., rebounded with over 14 pounds of fish today and found themselves advancing to the semifinal round.

The biggest comeback of the day – and likely the whole week – went to Jon Jezierski of Troy, Mich. On Wednesday he caught one fish weighing 3 pounds, 5 ounces, but Thursday he hauled in the biggest stringer of the tournament yet, five fish weighing 23-3, and leaped up to sixth place.

“It’s an awesome feeling,” he said. “I’ve struggled all year and yesterday I had boat problems. I just feel blessed.”

In fact, Jezierski and his co-angler partner, second-place Murvin Berry of Anderson, Ind., combined for the heaviest weight out of one boat today with 45 pounds, 9 ounces. Berry caught five fish weighing 22-6 and couldn’t have been happier.

While some competitors took a roller-coaster ride into the semifinals, it was Kreiger’s second straight day of solid fishing in a row that kept him in the pole position with an opening-round combined weight of 37 pounds, 15 ounces. The Osceola, Ind., native topped the next-closest pro, Jim Liechty of Fort Wayne, Ind., by 5 1/2 pounds.

Kreiger returned to his trusty location just outside of Elizabeth Park Marina to work the smallmouth oriented in the current of the Detroit River. While he had a little more company today, he managed to land six solid keepers by using a Bandit crankbait in the morning and following it up with a tube bait. Krieger knew the cut weight would be low and that he didn’t really need to catch over 18 pounds today, but he had his reasons to do so.

“The reason I went back and caught so much weight was, if I didn’t catch them, somebody else would,” he said, alluding to the crowd of tournament boats that lined the banks of the river around him. “I figured I better put them in my boat.”

Another motivating factor was the tiebreaker rule, which a lot of competitors don’t really consider in trying to make the cut. But Kreiger is acutely aware of the rule. Last May Kreiger won the Central Division tournament on Kentucky Lake by virtue of a tiebreaker over Shawn Penn of Benton, Ky. In the final round, both Kreiger and Penn weighed in 14 pounds, 1 ounce, but Kreiger won the event because he had weighed in more fish during the opening round.

“Yeah, it’s good to lead because it does come into play with a tiebreaker,” he said today.

Tomorrow Kreiger plans to return to the location that has treated him so well over the first two days, but since he has fished it pretty hard, he’s not banking on it.

“Unless the weather gets bad again, I don’t think I can win fishing where I’m at. (Jezierski’s) 23-pound stringer, it would be pretty tough for me to beat that,” he said. “I’ve got some other things I can do, but it’s kind of hard to leave an area where you catch 19 pounds a day.”

There isn’t a co-angler in the top 30 whose catch weights didn’t fluctuate by at least four pounds, up or down, from Wednesday to Thursday. More so than the pros, the Co-angler Division saw countless competitors who zeroed on day one come back with over 10 pounds on day two and make the cut.

Miles Johnson is not one of those co-anglers. He was fortunate enough to begin the opening round with a 10th-place stringer weighing 8 pounds, 5 ounces Wednesday. On Thursday he added a five-fish sack weighing 17-3 to push his two-day total to 25-8 and take over the lead in the division. He edged out Berry, whose spectacular 22-pound, 6-ounce stringer pushed him all the way up to second place with a two-day total of 24-7. Today was Johnson’s first lead in an EverStart tournament.

Johnson, who owns his own remodeling business, had to use some versatility to grab the lead. Yesterday he fished Lake St. Clair and today he caught his 17-pound stringer about 30 miles the other direction on Lake Erie. But one thing remained the same: his lure. He has fished exclusively with a mud puppy-colored tube bait that he says has a few special adjustments.

“We’re doing things with it that I don’t want to let out,” he said. “I haven’t fished with anything else.”

The top 30 pros and co-anglers will start from zero Friday and fish for one day to determine the top 10 anglers who will advance to Saturday’s final round. The winning pro will receive $15,000 cash and a new Ranger boat plus a $1,000 bonus from Garmin if he was using a fixed-mount Garmin sonar product. The winning co-angler will collect $6,000 cash.

Tomorrow’s takeoff is scheduled to take place at 7 a.m. at Elizabeth Park Marina. Friday’s weigh-in begins at 3 p.m. at the ramp, and Saturday’s final weigh-in will be held at the Wal-Mart Supercenter located at 2155 North Telegraph Road in Monroe, Mich., at 4 p.m.