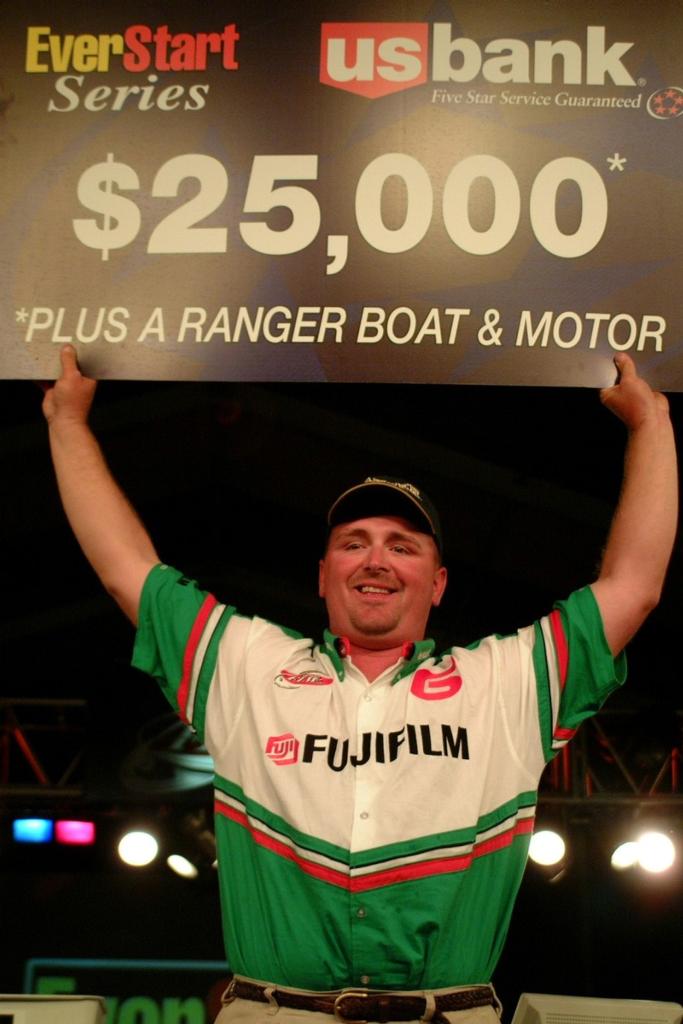 ALEXANDER CITY, Ala. – With 40 minutes remaining in the tournament, Koby Kreiger of Osceola, Ind., knew that he didn’t have anywhere near enough weight to challenge for the title of 2002 EverStart champion. However, as one of the more seasoned veterans on the tour, Kreiger also knew that the tournament could very well be won on a single cast. As it turns out, he was right on.

With time running off the clock, Kreiger played a hunch and stopped off at a spot he learned about two years earlier while fishing an FLW Tour event on Lake Martin.

“A pro had showed me this a couple of years earlier. I never caught anything there, but for some reason, I just decided to give it a shot,” he said. “It’s not a big spot, just two fallen trees. But I threw my line in anyway. I was backing up at the time and suddenly the fish hit. I didn’t even see it. Without a doubt, that’s the fish that wound up winning the tournament for me.”

When Kreiger pulled the 2 1/2-pound fish out of the water, he knew that he had positioned himself for at least a top-three finish.

“When I landed that fish, I knew I had about 7 1/2 or 8 pounds,” he said. “I thought at that point that I’d come in second or third place. I figured Jason Quinn or Vince Ingle would win it.”

However, back at the weigh-in, Kreiger saw all of his main rivals drop out one by one. Finally, Quinn was the only angler standing in his way. Quinn, who had already weighed in all of his five fish, finished the tournament with a 6-pound, 13-ounce stringer. Kreiger, on the other hand, had already recorded four fish with a combined weight of 5 pounds, 4 ounces.

“At that point I knew I had enough to win,” he said. “But then I started thinking, `Maybe that last fish I caught really didn’t weigh 2 pounds.’ My head started playing tricks on me.”

However, when Kreiger finally walked to the podium, the magical fish from the magical spot did in fact weigh in at more than two pounds. Kreiger, who had never won an EverStart Championship in his career, could finally celebrate.

“This is just awesome,” said Kreiger. “It’s just a great feeling. Before I came here, I really wanted to win this tournament. I didn’t have a very good first day, but I kept moving up as the tournament went on. It’s kind of weird how it worked out.”

To be sure, Kreiger put on a masterful performance. After the first day of competition, Kreiger found himself all the way back in 42nd place. During the second day, Kreiger used a 7-pound, 10-ounce catch to storm his way back to 17th place. But more importantly, his catch qualified him for the semifinals and kept alive his dream of winning the championship. In the semifinals, Kreiger finished in fourth place, setting the table for the dramatic and emotional victory in today’s competition.

“Things just worked out for me today,” said Kregier, who fished lake banks using a Super Spook Junior bait to land his stringer. “I’m still not sure why I stopped at some of those spots. I usually don’t do that. But something just told me to go there. It’s just an awesome feeling.”

Despite catching the largest total weight of the entire tournament, Jason Quinn of Lake Wylie, S.C., came up a little short when it mattered the most.

“I had the tournament won three times today, but hindsight is 20-20,” said Quinn. “I had a 4-pounder, a 3-pounder and a 2 1/2-pounder break off today. I felt like I could catch a limit of fish anytime I wanted to. And I knew that one good bite is all you need to have on this lake. I just didn’t get it today. But hey, $20,000 isn’t a bad consolation prize.”

Quinn, who led the tournament in each of the first two days of competition, used a three-bladed spinner bait, a jig and a finesse worm to land the majority of his catch.

“I had a good week,” he said. “I had a couple of opportunities to catch them, but that’s just fishing.”

The ‘Z-Man’ dodges a heartbreaking loss

Mark Zona of Sturgis, Mich., was never so happy to lose a tournament in his life. With only three anglers remaining in the tournament, Zona weighed in his final fish only to discover that he had tied Quinn at 6 pounds, 13 ounces. However, Zona was quickly informed that, although he temporarily had a share of the lead, Quinn would finish ahead of him by virtue of the tiebreaker.

“There’s not much I can say; I had to throw the best punch I could today,” said Zona upon learning the news. “It’s a real bummer.”

However, when Kreiger stepped to the podium and pulled out the victory, Zona could finally breathe a sigh of relief. At least now Zona didn’t have to go home knowing that he was a mere 1 ounce away from winning the championship.

“Dude you saved me,” said Zona while congratulating Kreiger on his victory. “Thanks.”

On the strength of a 6-pound, 3-ounce catch, Mark Holloway of Snellville, Ga., finished the tournament in fourth place. But almost as important, Holloway came away from Lake Martin with absolutely no regrets.

“I caught everything I had this week. I fished a good tournament,” he said. “I thought I could catch between 6 and 7 pounds a day, and that’s exactly what I did. I’m not disappointed in my performance at all.”

Holloway, fishing in one of the biggest tournaments of his career, netted $12,500 in prize money.

Using a Senko and Zoom finesse worm, Marcel Veenstra of Newtown, Pa., parlayed a 5-pound, 13-ounce into a fifth-place finish at the EverStart Championship. And that was just fine with him.