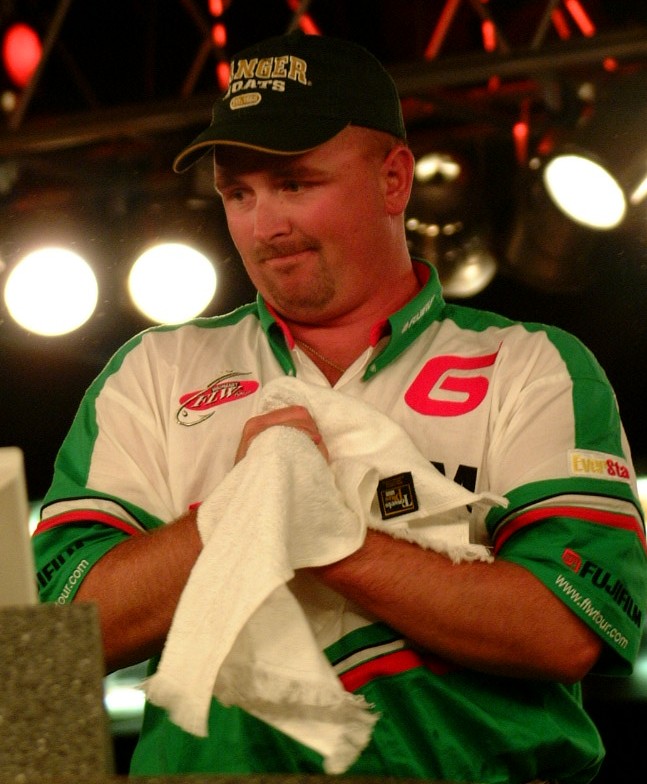 This one’s for Connie … The people involved in tournament fishing truly are family. You get that way when you’re on the road with the same folks for most of the year. So when Koby Kreiger accepted his championship trophy Saturday, the first thing he did was dedicate his win to Connie and Jerry Stakely. The respected and beloved husband-and-wife team who’ve been tournament directors for the EverStart Series since it began were conspicuously absent from their circuit’s championship this year, and they were sorely missed. Connie was diagnosed with cancer last year, and she and Jerry stayed home for treatment during the tournament. Everyone involved with FLW Outdoors – the anglers, the crews, even the writers and photographers – felt their palpable absence throughout the week. So it was fitting, then, when Kreiger accepted the trophy “for the Stakelys.” Koby – who lost his father to cancer shortly before he won his last EverStart tourney at Kentucky Lake in 2001 – is a tight friend of the Stakelys. He hoped that he would do well here so that he could publicly show his support. “I keep in touch with Jerry and Connie all the time by phone,” he said. “And I’ve been through it myself with my dad. So I was hoping that I would win this for them.” We’re glad you did, Koby, and we’re all thinking of you, Connie. 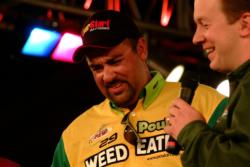 The Z-Man exhales … Perhaps nobody was happier for Kreiger’s victory than Mark Zona – and not just because Kreiger’s such a stand-up guy. Before Kreiger weighed in his last fish, Zona and opening-round leader Jason Quinn were locked in a tie for first place with a five-bass weight of 6 pounds, 13 ounces each. However, if Kreiger hadn’t eventually beaten them both with a weight of 7-12, Quinn would have taken the winner’s trophy due to the tiebreaker based on opening-round weight. The expressive Zona was, in a rare moment, at a loss for words when he saw that he might lose the title to a tiebreaker. “Yeah, that’s a bummer,” he said. “There’s not much else I can say right now.”

A Quinn-tessential runner-up? … Second-place Jason Quinn is one of the easiest-going guys on tour, but even he showed a little frustration at coming so close and missing the win. The reason? He finished second at his last EverStart tournament at Lake Martin, in 2000. “It’s not too shabby,” he said. “I’m a second-place finisher and that’s it.” What frustrated him wasn’t second place, it was that he lost three nice fish Saturday, which would have easily put him over the top. “I had the luck. Today it was just the bad side of it,” he said. Look for Quinn to improve his luck in a couple of weeks when he returns to Lake Martin for a B.A.S.S. Open. “They better look out,” he promised.

Family affair … Mark Holloway enjoyed his fourth-place performance at the championship even more so because he was able to compete with his brother, Kenny, in the semifinals. Both Holloways fished in Friday’s action. While Mark made the cut to Saturday’s finals, Kenny finished yesterday in 20th place.

Is the Wild Thing back? … Tom Dolin appeared before the TV cameras with a special haircut Friday and Saturday. He lost a bet earlier in the week – the nature of which he won’t reveal – and was subsequently walking around in a retro, Mohawk-type coif that made him look a little like Charlie Sheen in “Major League,” courtesy of roommates Mark Zona and Al Gagliarducci. So what was that bet, Hedgehead? “I’m not telling?” he explained.

2-14: Difference in weight, in pounds and ounces, between ninth-place finisher Gerald Beck (4-14) and winner Koby Kreiger (7-12), with seven others sandwiched in between.

13: Number of EverStart Series tournaments in which Kreiger has finished in the top 10, which includes two victories and two second-place finishes.

“I really wanted 4-5 more than you can imagine, Charlie.”
– An agonized Mark Zona, to tournament host Charlie Evans, as the scale wobbled between 4-4 and 4-5 on his last fish. He needed the last ounce to break the tie with Quinn. He didn’t get it.

“I do think that his look will appeal to a whole new generation of anglers.”
– Taffi Quinn, Jason’s wife, referring to her husband’s hoop-studded earlobes and long mane.