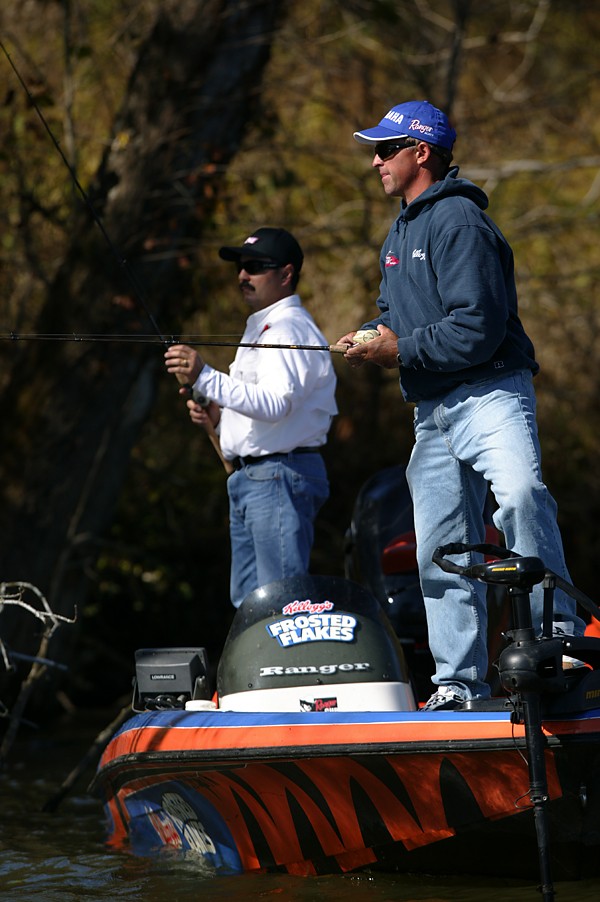 GALLATIN, Tenn. – It’s Clark Wendlandt’s world; the rest of us just fish in it. At least that’s what tournament anglers must think when they see his name on the list of competitors for any given event, anyway. The FLW Outdoors all-everything pro from Cedar Park, Texas, is proving his versatility once again, this time by claiming the opening-round lead at the EverStart Series Championship on Old Hickory Lake.

Wendlandt went out on the stingy, pressured waterway and amassed two consistent, solid stringers both days of the opening round. After his four-bass catch weighing 10 pounds, 7 ounces, Wednesday, he nearly duplicated the feat Thursday by catching four bass weighing 10-5. His total of 20-12 was the only weight over 20 pounds in the opening round and put him over a pound ahead of second-place pro Lou Treat’s 19-11.

The strange thing about Wendlandt’s steady performance is that he fished two completely different areas both days. After his second-place showing Wednesday, he basically decided to go practice fishing Thursday and laid off his main area. Lo and behold, he nails another 10-pound sack in unfamiliar waters on a day when other anglers had trouble just catching 14-inchers off their primary holes.

“I’ve never done that before,” Wendlandt said. “I just consciously decided not to go where I went yesterday. Actually, I even shook some fish off today, four of them. And they were pretty good size.”

One thing was the same, however, and that was Wendlandt’s bait and pattern. He has caught all of his fish on a 3/8-ounce, black-and-brown Gambler Ninja jig with a Gambler B.B. Cricket trailer.

“I’ve used one rod and I’ve used one lure the entire time,” he said. “I was really pretty discouraged before I got here because I generally don’t like to fish highly pressured water. But, I don’t know, I’ve just got a really good grasp on what these fish are doing right now. I’ve got one or two things working that are very detail-oriented, and I’m not sure everybody else has enough confidence to do the same thing.”

Make no mistake, when Wendlandt starts talking about confidence, that’s a shot across the bow of his competition. He has already won three FLW tournaments, two FLW Angler of the Year titles, 16 FLW top 10s, not to mention an EverStart Central Division second-place finish this season, his first year on the tour. When he says that he’s confident, he means it. And it means he’s on fish.

“There’s not as much pressure (at EverStarts) at there is at FLWs,” Wendlandt said. “And there aren’t many times where I’ve felt as comfortable as I do with what I’m doing here. I’m not second-guessing myself.

“Look, I want to win no matter what – whether it’s a game of pickup basketball, checkers or whatever. I’ve gone through a whole year without really contending to win a tournament, mainly on the FLW (Tour), and I feel like I’m on enough fish to win this one. It would mean a lot.”

Welcome to his world. 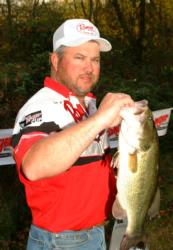 The pros brought in more limits today (14) than yesterday (two), and Treat caught one of them. He compiled his 19-11 sack with just five bites, and he landed every one of them.

“I caught one (bass) over 5 pounds today,” said Treat, who hails from Flippin, Ark., “And that’s the key here. You’ve got to catch those kicker fish. I thought I could catch them (this week) because every day in practice I caught a 3- or 4-pound kicker.”

Dan Mansky of Youngstown, Ohio, placed third with an opening-round weight of 17 pounds, 15 ounces, which he caught by using a crankbait on schooling fish in some flats. He also won the $625 Snickers Big Bass award for his 6-4 kicker largemouth.

For Mansky, today was redemption after a mechanical breakdown at his last EverStart tournament ended his run to win Northern Division Angler of the Year. At Lake Champlain, Mansky had around 18 pounds in his livewell by the end of day one, but a dead battery caused him to be late for weigh-in by eight minutes. Subsequently, he was penalized by 8 pounds. When the second day of competition was canceled due to high winds, Mansky finished the week well below 100th place and well out of AOY contention.

“Yeah, at that one all I needed was to finish around 50th or higher to win the points,” he said. “But this definitely makes up for Champlain.”

Fourth place went to Tennessee River veteran and past FLW champion Wesley Strader of Spring City, Tenn. He caught 17 pounds, 6 ounces in the opening round using mainly a Lake Fork Trophy Tackle tube and said the river current in Old Hickory has been key all week.

“It’s just like any river,” said Strader, who, like many anglers Wednesday, pointed out that the bass didn’t really start biting until the afternoon when the Corps of Engineers started pulling water through the lake. “You want it to flow so hard that you can barely pull (your boat) against it. The fish aren’t going to stay out there in the middle of the river and swim in it. This time of year, they start holding on rocks because they hold heat and they make a good current break for them, too.”

Tommy Dillon of Manhattan, Kan., placed fifth on the pro side with a two-day weight of 17 pounds, 4 ounces.

Thursday, Jim Tutt of Longview, Texas, caught the biggest limit of the tournament so far – 16 pounds, 12 ounces – and moved up to sixth place after posting a zero on day one.

“To paraphrase Rick Clunn: There are always more fish in an area than you realize,” Tutt said. “I knew that I had to bust them today, I just didn’t know that I’d bust them so big.” 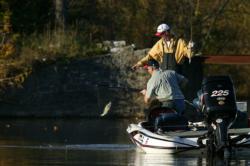 In a fluke occurrence, four co-anglers tied for 19th place Thursday with exactly the same weight. Normally, opening-round ties are decided by heaviest one-day catch weight, but all four of them caught 4 pounds, 6 ounces one day and zeroed the other. In other words, they all had the same one-day weight as well.

With no other tiebreakers available, tournament officials had to advance all four co-anglers into the top-20 semifinals, making it a 22-angler field. Since co-anglers need pro partners, the 21st- and 22nd-place pros also made the altered cut.

Thus, pros Bobby Lanham of Scottsdale, Ariz., (21st place) and Craig Powers of Rockwood, Tenn., (22nd) lived to fish another day when they initially thought they were done.

“That’s hilarious, isn’t it?” asked Powers, who caught 11 pounds, 8 ounces over two days and missed the original cut by 3 ounces. “I already had my stuff packed and ready to go. I was ready to go back to the house. If two of them tie, okay. Three, maybe. But four? There’s no way.”

Asked about his unexpected fishing prospects for Friday, Powers said: “I don’t know, but right now I’m tied with every one of them, so I’ve got as good a chance as anyone.” 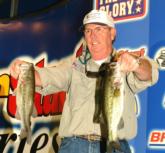 Bill Rogers of Jasper, Texas, took over the lead in the Co-angler Division with a two-day, seven-bass weight of 11 pounds, 9 ounces. He fished mostly with soft plastics and said he put on a lot of mileage to catch his fish.

“Today, we ran a lot,” he said. “We covered one end of the lake to the other, but we caught most of them up north. I enjoyed both my pro partners, and it worked out well for me.”

Day-one leader Ken Baldwin of Needles, Calif., who yesterday landed the tournament’s biggest bass so far – a 7-pound, 3-ounce largemouth – placed second after the opening round with a two-day tally of 9-3.

Third-place Mario Ringo of Arcadia, Calif., profited from a pair of fortuitous pairings in the opening round. On day one, he fished with pro leader Art Ferguson. On day two, he fished with Wendlandt.

“All they had to do was get me in the area and I knew that I could catch them,” said Ringo, who caught 8 pounds, 9 ounces over the first two days.

Todd Truax of Canton, Ohio, (8 pounds even, fourth place) and Jeff Taylor of Vernon, Ala., (6-15) rounded out the top five co-anglers.

The top 22 anglers in both divisions advanced to the semifinal round, which begins at the 8 a.m. takeoff Friday from Bull Creek marina in Gallatin. Weights are cleared for Friday’s competition, and co-anglers will fish for one day with the winner crowned following weigh-in. The top 10 pros based on Friday’s catch weight advance to Saturday’s final round, where weights are again cleared and anglers compete for position and prize money.