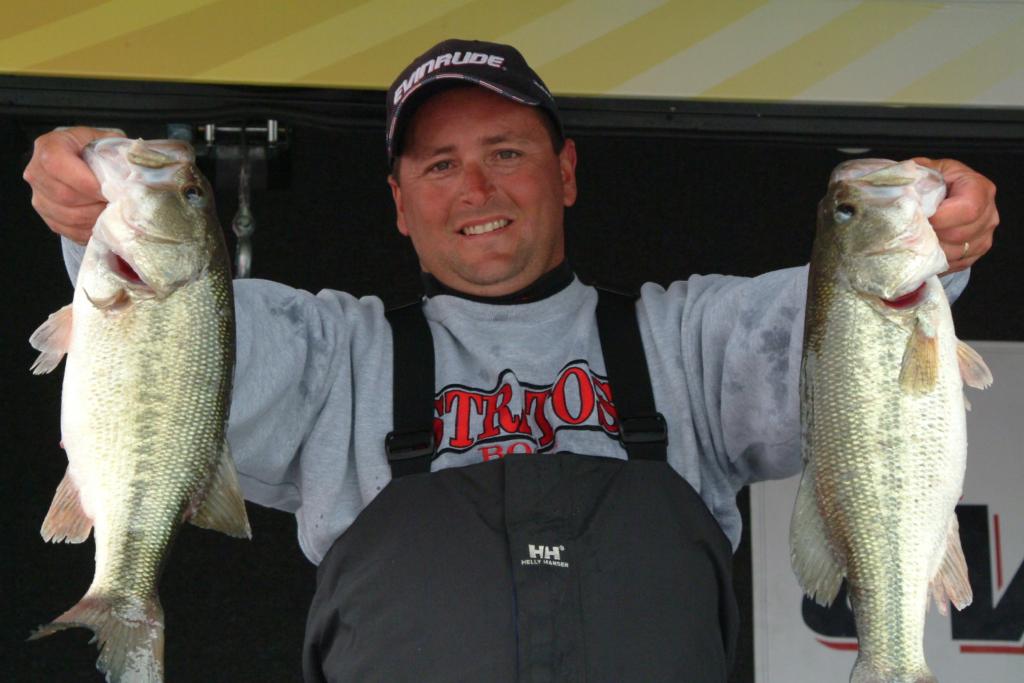 COLUMBUS, Miss. – The pretournament dock talk at the Columbus Pool never predicted that more than 1,400 pounds of bass would be weighed in on day one with a 19-pound sack leading the pro field. Today, the predictions of a tough bite rang true for most EverStart Series Central Division competitors, as numbers fell off both in weight and numbers caught.

Only three pros from yesterday’s top 10 retained their top-10 status, and yesterday’s No. 10 pro, Ramie Colson Jr., now leads the pack and is the only one of the three to better his weight on day two. Colson brought in another five bass Thursday that weighed 15 pounds, 15 ounces to lead the pro field with 29 pounds, 12 ounces.

What’s remarkable about the top 10 pros who advanced to the finals is that three of them finished 60th or worse yesterday. Second-place pro Greg Ingram bounced from 90th to second on the strength of the day’s heaviest limit, a 19-pound, 15-ounce stringer that boosted his two-day total to 24 pounds, 11 ounces. Pearl, Miss., pro Chris Bowers sat in 99th after day one, but will fish the final two days thanks to his catch Thursday of 16 pounds, 9 ounces that put him in seventh place.

Making a similar leap on the co-angler side is Bill Gift of Alix, Ark., who jumped from 104th to seventh with a two-day total of 11 pounds, 10 ounces. Ten pounds, 2 ounces of that came in today’s competition behind a pro who zeroed.

Though Colson is certainly catching the fish, he’s making quite a run south through two locks before navigating another 25 miles past the second lock to get to his hole. “I’m doing a lot of running and a little fishing,” he said.

Colson’s heavy sack could have potentially been even fatter had he not lost a 4-pounder and two other fish today. Nevertheless, his honeyhole is so sweet that he actually caught his last three fish in a backup area.

“I’m flipping and pitching cover – wood,” he said. “I’m using soft plastics, jigs and a spinnerbait occasionally. It’s a mixed bag with no rhyme or reason.”

While most anglers reported finding very few bass in practice, those who did seemed to be catching them down south with a sight-fishing pattern. Though Colson is certainly making the southern run, his water is too muddy to sight-fish.

“The fish are moving up, but it’s so muddy I can’t see them,” Colson said, confirming that the bass were indeed continuing their spawning pilgrimage despite the cold front that has significantly cooled the Mississippi-Alabama area.

“When it’s time for them to go, they go, regardless of the weather,” he said.

After a paltry 4-pound, 12-ounce catch yesterday, Greg Ingram hauled in 19 pounds, 15 ounces today to land in second with 24 pounds, 11 ounces. He said he owes his weighty catch to his co-angler partner, Richard Adams, a local from Columbus.

“We took a gamble and it paid off,” Ingram said. “I had six bites today, all keepers. I’m throwing a spinnerbait and concentrating on grass in and around cypress trees.”

Ingram and his partner headed north today, though the gamble didn’t pay off as much for Adams, who finished 95th on the co-angler side. Ingram, for one, is looking forward to the sunshine that might peek through tomorrow.

“The sun ought to be coming out and the cold front’s over,” he said. “We ought to be seeing some bigger weights.”

Local pro Will Dupler caught yesterday’s heaviest limit at 19 pounds, but caught only three bass today weighing 5 pounds, 11 ounces. His total weight of 24 pounds, 11 ounces was good enough for third, however, and Dupler earned a trip to the final round.

Behind him in fifth is Bobby Harrell of Biloxi, Miss., who scored his first EverStart top-10 with a two-day total of 10 bass weighing 22 pounds, 10 ounces. He caught 13 pounds of bass on day two.

Rounding out the top 10 pros on the Columbus Pool:

Medlock moves up in Co-angler Division

Tom Medlock of Licking, Mo., took over the top spot on the co-angler side with a two-day catch of six bass weighing 16 pounds, 10 ounces. Medlock finished second after day one with 15 pounds, 1 ounce and caught the day’s biggest bass, but his day-two stumble – only one bass weighing 1 pound, 9 ounces – was still enough to move him up a spot.

Fourth-place co-angler Michael Herron of Paris, Texas, caught a two-day total of eight bass weighing 14 pounds, 15 ounces, including the big bass on the co-angler side, a 6-pound, 6-ouncer. Behind him in fifth is Mark Taylor of Mansfield, Mo., who caught six bass over two days that weighed 12 pounds, 6 ounces.

The top 10 pros and 10 co-anglers will take off Friday at 6 a.m. from Columbus Marina, located at 295 Marina Drive in Columbus.