HENDERSON, Nev. – Fighting a scouring desert wind that swept most anglers off their good fish Thursday, Jeff Michels of Lakehead, Calif., managed to squeeze out another solid sack of bass from Lake Mead and took over the pro lead in Stren Series Western Division action after two days.

To say the least, the wind was relentless Thursday afternoon, blowing at a steady 25 to 30 mph. The battered anglers came off Lake Mead with stories of 6- to 8-foot swells, upended boats and speared waves on their return runs this afternoon. It’s a testament to these anglers’ boat-handling skills that there were no mishaps, but the bumpy ride undoubtedly left more than a few competitors with aching kidneys.

Thanks to the breeze, it’s no surprise that an already stingy, wintertime Lake Mead became even less generous with her bass. Out of a total 354 anglers, just two competitors, second-place pro Tom Phillips and 14th-place co-angler Stacy Gee, managed to catch five-bass limits.

However, some of the top pros from Wednesday, like Michels, managed to hook into a few solid three- and four-fish stringers to stay in contention. Michels, in second place heading into the day, caught four bass weighing 9 pounds, 8 ounces Thursday and took a relatively commanding lead over Phillips with a two-day total of 21-11. 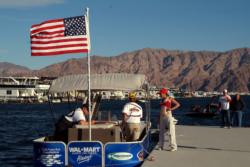 Michels started the day using the same approach that delivered him one of the top stringers on day one, employing a drop-shot with 4-pound-test line and a little worm. However, things didn’t quite go as planned early on.

“If it hadn’t been for my co-angler partner (Kyle Clement of Anderson, Calif.), who had a little local knowledge, I really think I would have blanked today,” Michels said. “I didn’t have a fish until 12 o’clock. I started throwing the same bait at the same place I did yesterday and got nothing. My co-angler said he went prefishing on a day just like this and caught some fish on this spot. So we went there and I caught two fish on back-to-back casts. I ended up catching four on that spot.”

Michels said there was nothing fancy about the location; he fished breaklines in 10 to 20 feet of water. However, the wind made keeping his light tackle down a chore.

“At times, I actually put two drop-shot weights on there to keep it down,” he said.

Grateful for Clement’s help today, Michels readily admits that he “could blank in a second tomorrow,” especially with the forecast calling for more adverse conditions. However, he’s optimistic about his pole position now, especially with Lake Mead acting so fickle.

“To tell the truth, I won’t know what I’m going to do until I take off tomorrow and see what’s happening with the wind and weather,” Michels said. “But this is my first time on this lake, so I’m ecstatic to be where I’m at.” 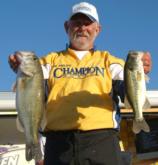 Also buoyed by a fortuitous fishing hole, Phillips’ limit Thursday – the only one in the Pro Division – weighed 12 pounds, 2 ounces and was the heaviest catch of the day. The veteran from Corona, Calif., ascended into second place just under a pound and a half off the lead with a two-day total of 20-6.

“You’d be surprised. I just have a wonder spot,” Phillips said. “I got bit there in practice, so I went there yesterday and got four bites in four casts. Today, I made five casts and caught three fish. My co-angler couldn’t believe it. I can fish miles down the bank one way and miles up the other way and get absolutely nothing. But this one spot is a miracle spot, and it keeps replenishing.”

Phillips said he caught his limit on a ¾-ounce jig with 12-pound fluorocarbon line. He said the window of opportunity at his honeyhole is small, but it is productive.

“The bite there was a 10- to 12-minute thing, and then it was over. Why did they turn on like that? I have no idea, but they did,” he said. “If it’s got five more fish in there tomorrow, I’m going to do some whuppin’.” 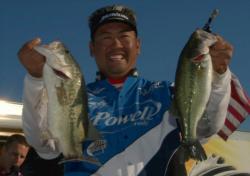 Tom Matsunaga of Gardena, Calif., also climbed a spot in the Pro Division, taking third place with a two-day total of 20 pounds even. He caught three bass weighing 8-5 Thursday.

“On my second cast, I caught a 4 ¼-pounder. So I was thinking the day’s starting off great,” he said. “But then the wind picked up.”

Matsunaga eventually caught two more bass by dead-sticking jigs in pockets and holes on outside reefs. He said the five spots he’s rotating through are kind of exposed, and that a little wind is good for him, but not as much as he saw today.

“If it does blow tomorrow, I’m going to have to change my game plan,” he said.

Reigning Western Division pro points champion Jimmy Reese of Witter Springs, Calif., posted another solid limit for the second day in a row and climbed to fourth place with 17 pounds even. He just-more-than equaled his day-one weight, 8-5, with a four-bass catch of 8-11 on day two.

“I left my primary area today because I think the fishing pressure hurt it more than anything,” he said. “There were 23 boats in the area I was fishing, so I was happy to go to my second spot. I was just pitching plastics in shallow water.”

Ward hangs on for fifth

Pro Fred Ward of Phoenix caught just one fish Thursday, but still managed to stay in the top five with a two-day total of 16 pounds even. His one-bass weight was a stout 3-15.

“I didn’t get anything going in my spot. It was just too busy, and then the wind blew me off of it,” he said. “I’m going to do something a little different tomorrow, make some adjustments.”

Rounding out the top 10 pros after two days at Lake Mead:

Notably, the second-heaviest catch of the day belonged to local pro favorite Tim Klinger. After weighing in just one short bass Wednesday, the Boulder City, Nev., native popped a four-bass, 10-pound, 12-ounce sack Thursday and climbed all the way into 11th place with 12-3.

Also of note, right behind Klinger sits Dennis Kolender in 12th place. Kolender hails from Henderson, Nev., and is another local favorite.

Despite a low catch rate not seen in pro fishing since the days of the Pascagoula River – or the last Lake Mead tournament, for that matter – this lake does yield a few pigs here and there. Jamie Cyphers of Las Vegas won the Snickers Big Bass award in the Pro Division Thursday thanks to a nice 6-pound, 4-ounce largemouth. 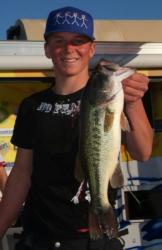 Scott Christenson of Hollister, Calif., caught just one bass Thursday. However, it was a good one – 3 pounds, 14 ounces – and launched him into the Co-angler Division lead with a two-day total of 11-8.

The wide-eyed Christenson, who is just 17 years old, said it was a rough day, but he seemed more than happy with the outcome.

“I was a little nervous because I had no fish until 11 o’clock. I got one bite all day and just one fish,” he said. “And those 6-foot swells coming back were pretty nasty.”

Russell Schmidt of Martinez, Calif., placed second for the co-anglers with a two-day weight of 10 pounds, 11 ounces. He caught one bass worth 1-9 today.

Rounding out the top five co-anglers was Ronald Schneider of Sandy, Ore., with 9 pounds, 3 ounces. He caught three fish worth 6-9 Thursday.

Bitting also won the Snickers Big Bass award in the Co-angler Division thanks to a 4-pound, 12-ounce bass.

Day three of Western Division competition at Lake Mead begins as the field of 127 boats takes off from Callville Bay Marina at 6:30 a.m. Pacific time Thursday. Following tomorrow’s competition, the fields will be cut to the top 10 anglers apiece based on three-day cumulative weight.