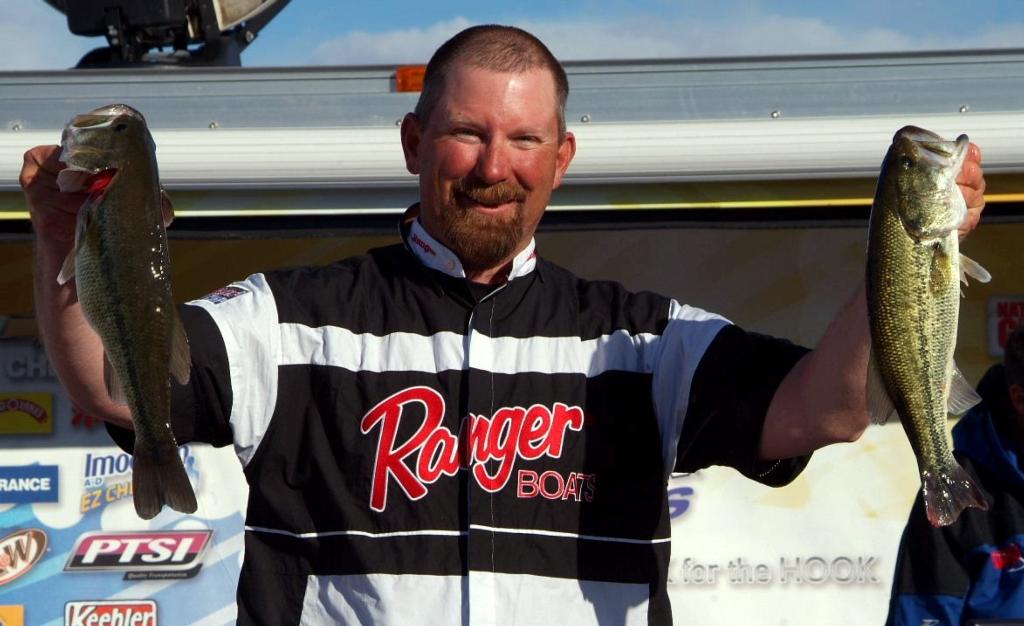 HENDERSON, Nev. – The wind howled again in Stren Series Western Division action at Lake Mead Friday, and that seemed kind of appropriate since Jeff Michels is getting ready to blow this competition out of the water.

The pro from Lakehead, Calif., who led after two days, stretched out his lead over second place by 7 pounds, 13 ounces. Michels caught one of only four five-bass limits for the day – 10 pounds even – and will hit the ground running in Saturday’s finals with an impressive three-day total of 31-11.

This is the kind of light-bite tournament where a pro can bonk for a day and still stay in the hunt. Indeed, nearly every pro who made the top-10 cut Friday had an off day somewhere over the first three days. (In fact, no fewer than two finalists posted zeros Friday and still made the cut.)

Everyone except Michels. He caught 12 pounds, 3 ounces the first day, 9-8 the second and 10 even today. With such a run of double-digit stringers at Lake Mead, not to mention an 8-pound lead heading into the finals, the guy must feel pretty confident about his chances, right?

“No, I don’t feel comfortable at all. I’ve been losing sleep over it,” he said. “I wish I could say I could catch five again like that tomorrow, but I could just as easily go out and blank.”

Michels let slip a little more about his fishing strategy today. He continued to fish a drop-shot with extremely light line, working breaklines and ledges in 10 to 20 feet of water. Nothing real special there for Lake Mead this time of year. The key, however, seems to be his fishing area.

“I’m fishing in Swallow Bay, and I found some great spots today. I fished a lot of new water, looking for stuff for tomorrow,” he said. “I’m just going really slow with really superlight finesse tactics, and it’s continuing to work. The problem is that I’m only getting five or six bites a day. It’s scary; if I don’t hook every one of them, it could hurt.”

Since he certainly wasn’t the only competitor in Swallow Bay this week – which, under the windy conditions, is conveniently located just a bay or two around the corner from the tournament site at Callville Bay – what sets Michels’ fishing week so far apart from everybody else’s? His bait? His spots? His boat-positioning acumen in windy conditions?

He has another theory.

“It’s a combination of everything,” he said. “The guys I’m rooming with say I’ve got an angel on my shoulder this week. I don’t know about that, but there’s something up there helping me out. She took some time off yesterday, but thankfully she came back.” 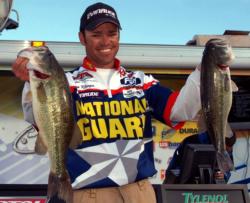 Two years ago, Tim Klinger took an agonizing blow when he lost by a single ounce in the Stren Series tourney here on his home lake. This year, the Boulder City, Nev., pro is mounting a Herculean effort to put that unsavory memory to rest.

Klinger caught just three bass Friday, but two of them were fatties weighing a respective 4 pounds, 15 ounces and 4-14. His stringer rang in at 11-11 – the second-heaviest of the day – and catapulted him into second place with a three-day total of 23-14.

So far, his comeback has been the most impressive of the week and not altogether surprising. After the first day, he languished in 87th place with a one-bass catch, but he vaulted into the top 20 yesterday with a bag over 10 pounds.

“The first day, I thought I could stay local and catch 8 or 10 pounds. I know it really well down here, but I was wrong,” he said. “The second day, I ran up to (the) Overton (Arm) and Muddy River, and I was pretty fortunate to catch a couple over 4 pounds. I just went back there today.”

Klinger said he caught his fish Friday on a jig, but has also employed a drop-shot with 20-pound line this week.

He swears that, even though he has almost 8 pounds to make up on Michels, this one’s not over yet.

“He could go out and blank, and one of the other guys or myself could catch 15 or 20 pounds. I know where to catch some big ones. With as many 4- to 6-pound fish that have already been caught this week, 20 pounds is easy,” he said. “I know I could win if they bite, and it would mean the world to win. It would be so cool to do it front of my parents and my friends. There’s nothing else like that.” 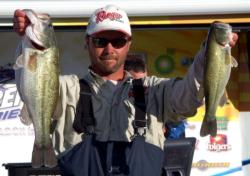 Pro John Mikkelsen of Temecula, Calif., popped the heaviest sack of fish Friday – a limit weighing 13 pounds, 7 ounces that included a 4-12 kicker largemouth – and moved into third place with a three-day total of 23-12.

“I caught them all on a jig,” he said. “I started in Callville Bay, and then I went down to Las Vegas Wash and fished main-lake points down there. When I got on that spot, I caught two fish back to back, and then I caught a couple more, all between 1 and 1:30. The fish are staging; I think they’re moving up to spawn on those points.” 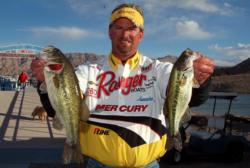 Jimmy Reese of Witter Springs, Calif., held on to fourth place in the Pro Division with a three-day total of 22 pounds, 6 ounces. His three-bass catch Friday, 5-6, was about 3 pounds short of his previous two days’ efforts.

“I went all the way up to my first spot and caught nothing. Then I went to my secondary spot and caught three fish,” said Reese, who caught fish on baby brush hogs and Roboworms this week. “That’s pretty much what I wanted to do.” 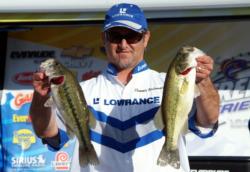 Another Lake Mead maven, Dennis Kolender of Henderson, Nev., staged a comeback of his own and grabbed fifth place for the pros with a three-day total of 20 pounds, 13 ounces.

“I’m pretty happy about it,” said Kolender – who finished third, just behind Klinger, in 2005 Stren competition here. “Yesterday, I had no bites until a quarter to two. Today, I went back to the same place and had four fish by 9:30.” 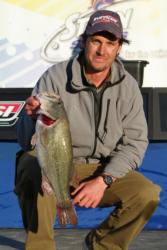 Rounding out the top 10 pros to make the cut after three days at Lake Mead:

Paul Addi of Las Vegas earned $211 for the Snickers Big Bass award in the Pro Division thanks to a 6-pound, 1-ounce bass.

Scott Christenson of Hollister, Calif., the 17-year-old who led the Co-angler Division Thursday, managed to hold on to the top spot Friday with a three-day weight of 11 pounds, 8 ounces.

He didn’t catch much on day three – just one bass worth 1 pound, 15 ounces – but fortunately for him, neither did anybody else from the back of the boat.

“It was a tough day out there, really windy,” Christenson said. “I got my fish at about 9 o’clock, and my pro got his at about 2. That was it. But all my fish this week, I’ve caught pretty deep just fishing slow with plastics.”

Gayle Janes of Bermuda Dunes, Calif., took second place for the co-anglers with a three-day total of 11 pounds, 12 ounces. He caught 3-7 Friday.

Co-angler Stacy Gee of Sacramento, Calif., made the cut in third place with a total weight of 11 pounds, 11 ounces.

Ron Frye of Dixon, Calif., took fourth place for the co-anglers with a three-day weight of 11 pounds, 4 ounces.

Ronald Schneider of Sandy, Ore., rounded out the top five co-anglers with a three-day weight of 11 pounds, 2 ounces.

Aaron Reitz of Soda Springs, Calif., earned $113 for the Snickers Big Bass award in the Co-angler Division thanks to a 3-pound, 15-ounce bass.

Day four of Western Division competition at Lake Mead begins as the final-round field of 10 boats takes off from Callville Bay Marina at 6:30 a.m. Pacific time Saturday. Each division’s winner will be determined by four-day combined weight.