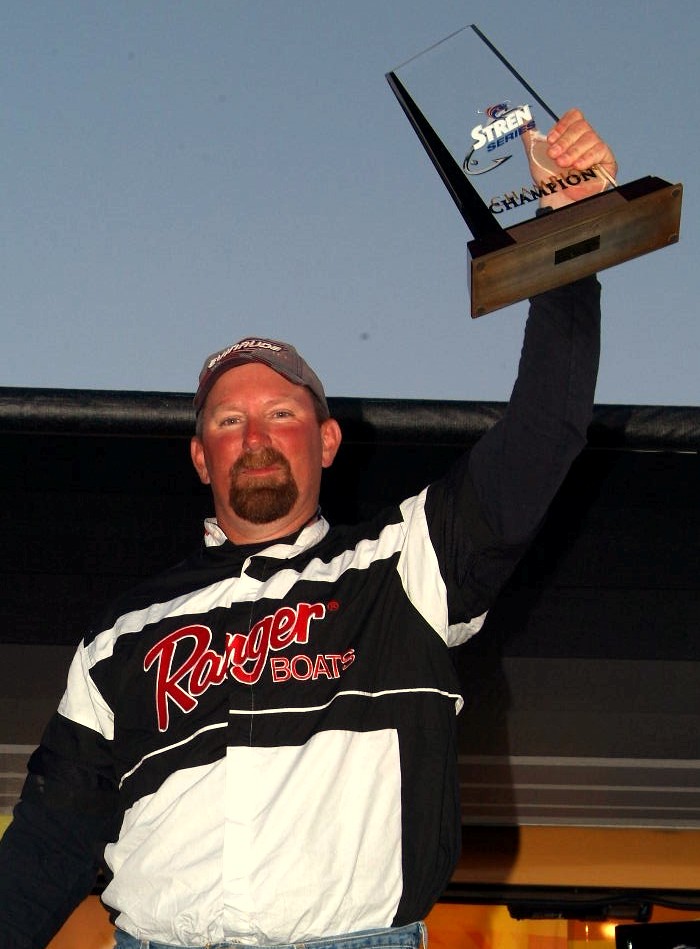 Pro Jeff Michels of Lakehead, Calif., caught zero bass Saturday but was able to hang on and win the Stren Series Western Division tournament on Lake Mead with a four-day total of 14 bass weighing 31-11. For his victory, Michels earned $25,000 cash and a $40,000 519VX Ranger boat powered by Yamaha. He also earned $4,500 in Ranger Cup and Powered by Yamaha bonuses for a total of $69,500 in winnings. Photo by Jeff Schroeder. Angler: Jeff Michels.
February 24, 2007 • Jeff Schroeder • Toyota Series

HENDERSON, Nev. – Sometimes nothing can be a real cool hand.

In tournament fishing, the infinite wisdom of Cool Hand Luke generally carries little water because “nothing” is an undesirable descriptive for a day on the lake. Simply put, it translates into no catches and lost winnings.

Not so for Jeff Michels.

The pro from Lakehead, Calif., won the second Stren Series Western Division contest of the season at Lake Mead, collecting $25,000 and a new Ranger boat, with a four-day total weight of 31 pounds, 11 ounces.

And he did it without catching a single bass in Saturday’s final round. Count Jeff Michels as the world’s biggest fan of this year’s switch to the cumulative-weight format.

“That is not the way I wanted it to happen,” an exasperated Michels said Saturday evening. “I thought my chances were slim to none. I really thought Tim had me.”

“Tim” is local pro Tim Klinger, who made a menacing push toward the top of the leaderboard over the last two days and who had his sights set squarely on Michels Saturday.

However, Klinger, who ultimately finished fourth, was a lesser worry to Michels than he realized. He had bigger problems in the form of Sean Stafford and even John Mikkelsen, the respective second- and third-place finishers.

And of course, there was that minor little detail about catching nothing.

“I didn’t get a single bite today,” Michels said. “In that clear water when we didn’t have any wind, they just wouldn’t bite. I saw a bunch of fish where I was fishing, but I just couldn’t get them to bite. Boy, those last two hours of the day were the longest two hours of my life.”

Michels won this event by virtue of the whirlwind he rode on Lake Mead over the first three days – literally. His three, solid, double-digit limits came as a cold front moved through the area Wednesday, Thursday and Friday, whipping the desert impoundment into a nasty froth.

As Stafford described it: “You know, I’ve fished all over the West, and Thursday was the biggest water I’ve ever seen. The only times I’ve seen water like that before were the last two times I was here.”

However, the wind lay down like baby for Saturday’s final round, and it greatly impacted the bass bite – most notably the lack of one experienced by the winner. The top 10 pros caught a collective 10 fish as a group. Stafford’s three-bass catch weighing 8 pounds, 1 ounce was the heaviest of the day, and nobody else caught more than two fish. Four pros, including Michels, zeroed.

To say the least, it seemed that the pros who qualified for finals under windy conditions had a little bit of trouble adjusting to calmer water.

Still, Michels won this thing outright. His near-8-pound lead coming into the finals was more than enough cushion on a tricky fishing day. 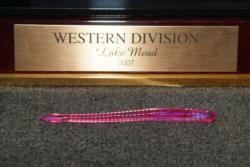 How he got there over the first three days was simple enough: He found a magic bait and some good holes on the lower end of the lake. In practice, Michels found success with a Senko on his drop-shot fishing in Las Vegas Wash and Swallow Bay. However, the Senko bite dried up shortly before tournament time, and he was forced to do something that he almost wouldn’t admit: He had to go pink.

“Without (co-angler) Justin Regelin, my practice partner, I would not be standing here,” Michels said. “I was whacking them with those Senkos, but then they stopped biting. He had these 4 1/2-inch Morning Dawn worms that he’d initially bought for his daughters to play with, and he just happened to bring them on this trip. I mean, these things are pink as (heck). It took about four hours of him beating me really, really bad before I finally put on a Morning Dawn worm. That’s the only bait I threw the entire week.” 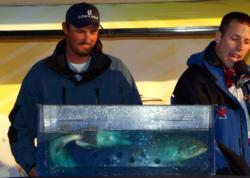 Stafford tops for the day, climbs into second

Collecting $7,005 for second place with a four-day weight of 28 pounds, 7 ounces, Stafford’s three-bass catch Saturday really was the only noteworthy sack of the day for the pros.

The pro from Fairfield, Calif., said he fished an Original Gitzit and brush hogs on offshore ledges in 20 to 40 feet of water. In simplest terms, he adapted best to Saturday’s calmer, sunnier conditions.

“I had several ledges, and I was rotating them,” Stafford said. “I just had to watch the sun and keep moving to where a ledge would create shade for the fish. Otherwise, they’d get in too close to the ledge, and it was too hard to get at them. The problem was, the first day and the last day I left my fish too early, and I regretted it.” 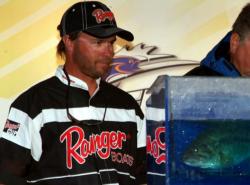 “There were fish on the spot where I caught them yesterday,” he said. “I could see them, but the wind and the weather wasn’t blowing on them, and they just didn’t want to eat.”

Klinger, a pro from Boulder City, Nev., still has yet to win the big one at home. He caught just one bass Saturday weighing 2 pounds, 15 ounces and finished fourth with a final weight of 26-13. He won $5,604.

“The other day I lost a couple of giants, so that hurt. But this is still pretty good for not practicing,” said Klinger, who arrived at the Lake Mead tournament straight off the Lake Travis Wal-Mart FLW Tour event the week before. “One of these days, if you keep coming here, I’m going to win one.”

In ninth place coming into the day, pro Charles Almassey of Oakley, Calif., finished fifth and earned $4,904 with a four-day total of 25 pounds, 1 ounce. He caught two bass weighing a collective 6-6 Saturday.

“These fish just have bony mouths, and when you fish with light line like I am, you’ve got to make sure you stick them,” he said.

Rounding out the top 10 Pro Division finishers at Lake Mead, based on four-day combined weight:

The next Stren Series event is a Central Division contest at Bull Shoals near Bull Shoals, Ark., Feb. 28-March 3.

The next Western Division tournament is the third event of the season. It will be held at Clear Lake near Kelseyville, Calif., April 25-28.