The Long road to success 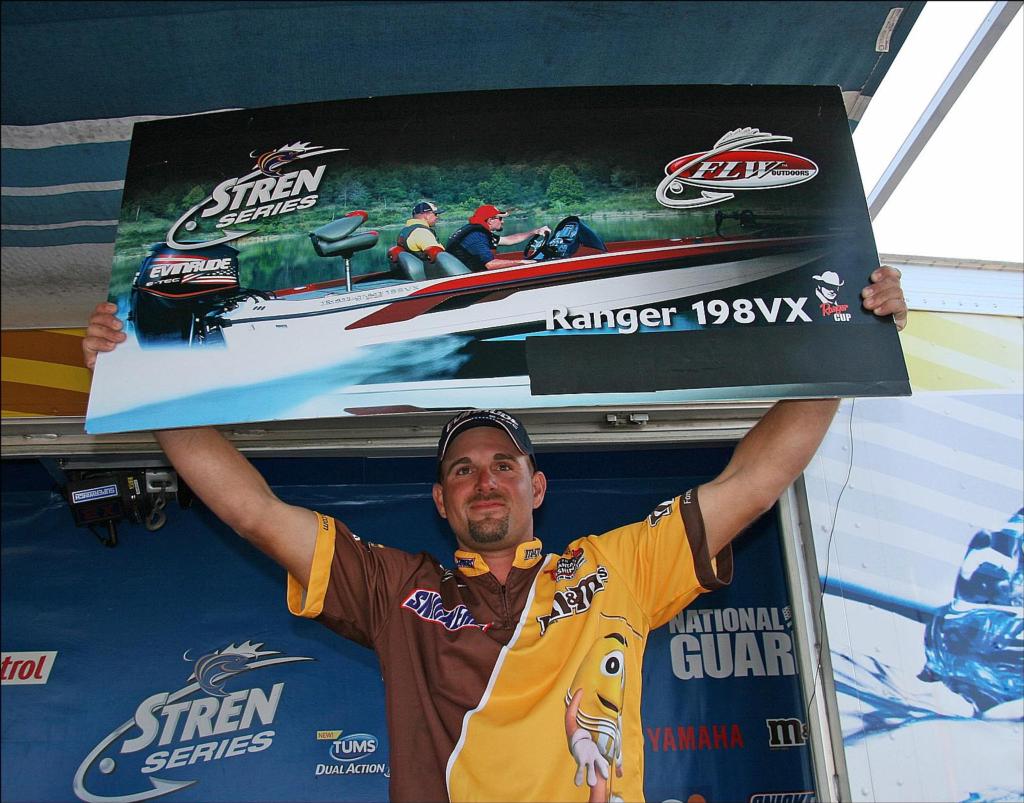 OSAGE BEACH, Mo. – When the dust settled at the Stren Series Central Division event on Lake of the Ozarks, Sarcoxie, Mo., pro Shane Long had a new appreciation for this tournament truism: “When it’s your time, everything falls into place.”

This time around, add this: “…even when it looks like it’s not your day.”

It’s a little before 7 a.m. Ten boats parade away from the Grand Glaize Recreation Area dock and blast off once they clear the “No Wake” buoy. Chilly morning with clear skies and a glowing horizon – looks like everyone’s due for a pleasant day on the water.

It’s a little after 7 a.m. One of those boaters calls tournament director Ron Lappin to advise him that he’d just broke a blade off his prop. You guessed it – Long was the unlucky angler. Fortunately, service techs replaced his prop and got him back on the water by about 9 a.m. Eight hours later, Long’s day-three weight of 14-11 gave him a winning total of 47-6 and a prize package that included nearly $16,000 plus a Ranger boat, motor and trailer package.

Of the morning mishap, Long said: “This has been a crazy day. It started out really bad, but you really

just have to put that out of your mind. If you let stuff like that bother you, it’ll just drag you down.”

Nice story, but once in a great while we fishing scribes observe a moment that reminds us why we do what we do. It’s cooler than the 60-mph boat rides, more exciting than a topwater blow-up, more genuinely beautiful than a cloudless sunrise. It’s that special moment when real people with real emotions create something really unforgettable.

Here’s the scene: Long had dropped four good fish in the tank, and that quartet more than covered the 8-14 he needed to take over the lead. Now, lots of anglers tease the crowd with what they may or may not have as their final fish, but Long took a different approach. He pulled out two pieces of folded notebook paper adorned with simple paintings and hand-written notes and shared the motivation that got him through the day.

“Before the tournament, my daughters gave me these good-luck notes, and I’ve kept them in the boat with me all week,” Long said. 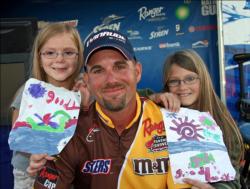 Truly touching, but he wasn’t done. Reaching into his bag, Long yanked out a chunky 5-pounder and said, “Girls, this is for you!”

Dry eyes were few, and mine were not among them. The world needs more of that.

Back to the fishing stuff, Long held the second-place spot for the first two days with limits weighing 18-7 and 14-4. He has relied on a 5/16-ounce blue-black Lucky Strike finesse jig this week, but he decided to add a Lucky Strike 4 1/2-inch swimbait to his arsenal. Armed with a weighted shank hook, the swimbait produced a couple of Long’s keepers.

“A lot of people will throw a swimbait around that shallow structure, and that swimbait just gives them something different to look at,” Long said.

Long fished his swimbait on 15-pound fluorocarbon and his jig on 20-pound fluoro. Fishing shallow, muddy water in the backs of pockets throughout the lake’s Osage arm, he hit 30 to 40 docks Saturday.

“The fish were moving because the shad are coming into these pockets,” Long said. “As the week 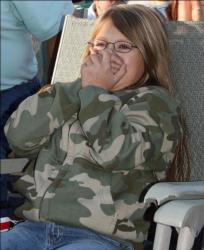 progressed, they were moving further back in these pockets, and today I was just trying to hit the last few docks in the backs of these pockets. I was just churning mud with the trolling motor all day.

“During the first two days, I tried to stay out of a couple of areas, but today it was really tough because there were a lot of people up there for (a local tournament). I had a few key docks that I kept going back to, trying to get a bite. I had one area that I’d left along all week, and it’s where I caught that big fish. I was really fortunate – I only had six keeper bites today, and I put every one of them in the boat.”

Long remained consistent throughout the tournament despite fluctuating weather. Day one saw cloudy conditions with evening thunderstorms as the leading edge of a cold front entered the area. Day two brought clear skies, but cooling temperatures and relentless wind scattered fish and made for tough boating. The final day saw winds declining, but the front’s lingering influence continued to cause trouble. 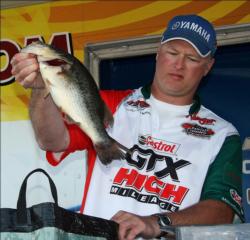 Tennessee pro Zack Bull led the field for the first two days. He grabbed the early advantage on day one with 23 pounds, 13 ounces – the tournament’s only bag over 20. On day two, Bull struggled when the cold front displaced all of his big fish. He managed 12-6 on the second day and retained his lead. Day three yielded only three keepers that weighed 8-2, and he slipped to second place with 44-5, earning $6,337.

Bull had a live-or-die commitment to his black-and-blue jig. He fished the bait around docks and caught fish on the bottom and suspended in the water column. Bull recalls getting off to a strong start.

“Actually, I had two fish at 8 o’clock this morning. I said `This is going to be easy. I’ll get three bites in the rest of the day.’ But it didn’t happen.”

Contending with intense crowding stymied Bull’s efforts by preventing him from accessing his spots.

“The pressure really did hurt me today. If there was just one boat on a spot, I’d go in there. If there was three boats, that’s a little bit different. The fish are getting beaten up on the docks, and that’s spooking them.

“I lost two fish that probably would have done it for me, but that’s the breaks of the game.”

Jeremy Lawyer of Sarcoxie, Mo., continued his rise in the standings with a limit catch of 13-9 that 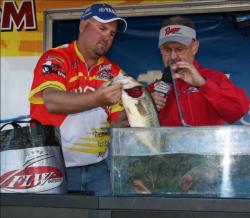 yielded a third-place 41-8 total worth $5,070. After placing 11th on day one with 14-4, he added 13-11 on day two and improved to fifth. Lawyer caught every fish that he weighed in the tournament on green-pumpkin Lucky Strike tubes.

“I think it was just a little bit of finesse,” Lawyer said. “Everybody was throwing something big and bulky. I think the glide of that tube got them to eat it better than something that fell straight down.”

Lawyer fished in the back ends of various lake arms.

“I stirred up mud. I didn’t catch very many, but if I caught one, it was a pretty good one. I didn’t have very many keepers today, but I had a couple of the right ones.” 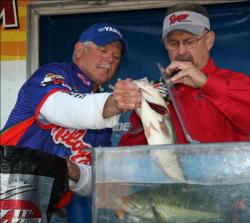 Having grown up fishing Lake of the Ozarks, Mark Tucker of Kirkwood, Mo., felt he needed to swing for the fences in the final round and go where he thought he could find the winning bag of fish. After fishing the lower end of the lake during the tournament’s first two days, Tucker scrapped that plan and followed a hunch that he’d fare better at the upper end. Unfortunately, the fish did not cooperate, and his 11-pound, 4-ounce limit kept him in the fourth place spot with 41-5 worth $4,436.

Tucker had risen from 18th to fourth on day two with his 17-pound bag.

“You really shouldn’t go looking for fish – you should stay with the fish that you’ve been catching. But I knew that if I wanted to have a chance at blowing this thing open, I needed to go fish where my heart was at.”

“I was flipping over (dock) cables, so I had a lot of faith in that Berkley line.”

Joe Bennett of Independence, Mo., also sought the homerun stringer in the upper end of the lake, but he 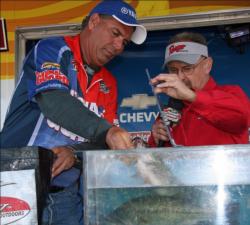 Bennett flipped a 3/16-ounce green-pumpkin tube around docks and went with a 1/2-ounce white-chartreuse spinnerbait when the wind intensified.

Rounding out the top 10 pro leaders at the Stren Series Lake of the Ozarks event: