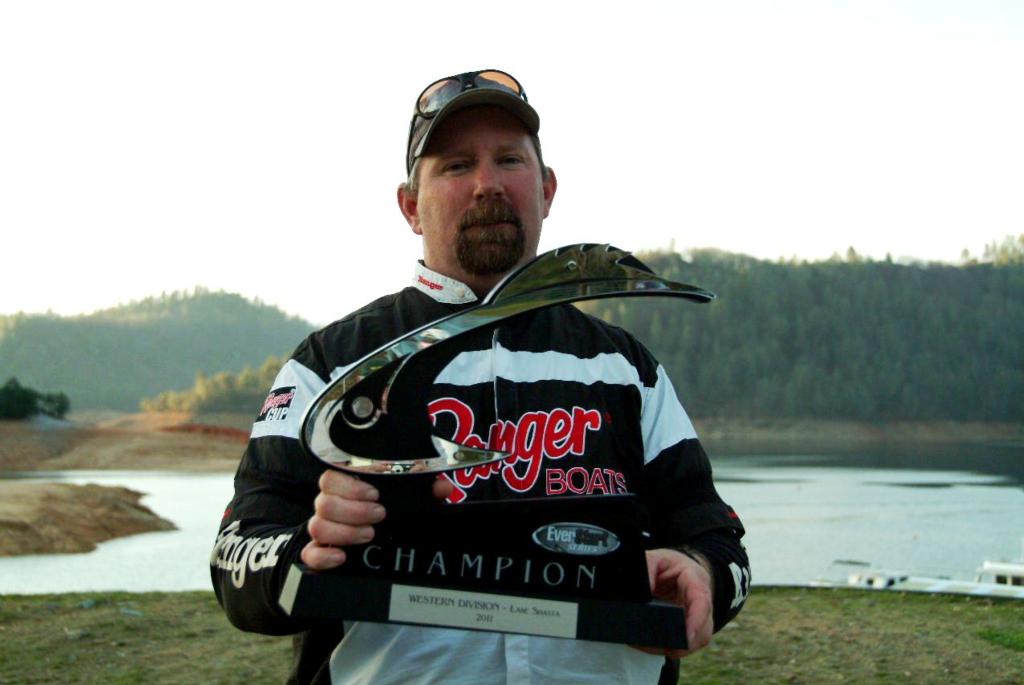 REDDING, Calif. – Just how dominant was Jeff Michels of Lakehead, Calif., this week on Lake Shasta? So dominant that the California pro need not have weighed in today to capture the EverStart Series tournament title. When all was said and done, Michels turned in an incredible three-day catch of 36 pounds, snatching victory with more than 8 pounds to spare.

Needless to say, Michels was more than happy with his incredible performance – one not seen on Lake Shasta in quite some time.

“Believe it or not, I did break a sweat today,” joked Michels shortly after securing his anticlimactic victory. “I only caught 6 pounds today and coming back to weigh-in I started doing the math in my head. I was really worried about (second-place qualifier) Rob Bass because I knew where he was fishing and I know that his area was definitely capable of producing 14 pounds. But it was great to get a win. Although this is my second EverStart title (Michels also won the title on Lake Mead in 2007), this one is sweeter because it was in front of my hometown, friends and family.”

While the pre-tournament conventional wisdom suggested that it was going to be extremely difficult to catch bass in the 3- and 4-pound range, Michels stunned the crowd time and time again by bringing three monsters to the scales over the course of the event weighing anywhere from 5 pounds, 15 ounces to 7 pounds, 3 ounces. And obviously anytime an angler can routinely net fish of that size on Lake Shasta it’s going to be noteworthy.

“I got real fortunate this week,” said Michels. “Out of the 30 pounds of fish I caught the first two days, 18 of those pounds came on three fish. Getting those three big bites really helped me.” 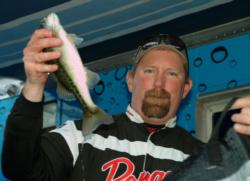 Michels said that he targeted spotted bass on points and steep rock walls with a combination of 6-inch Mother’s Finest worms, Dry Creek tubes and Yamamoto Senkos throughout the week.

“Basically I targeted points for my big fish pattern and rock walls to get my smaller limits,” he said.

When all was said and done, Michels said he couldn’t have been happier with the way the week went.

“It just feels great,” he said. “It’s nice to get a victory and it’s a heck of a payday as well.” 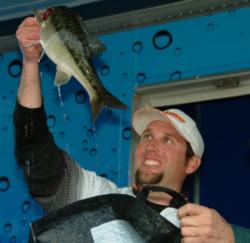 Although Richard Dobyns of Yuba City, Calif., finished in second place overall, the California pro was seemingly as surprised as anyone over his good fortune. Although Dobyns had a phenomenal opening round of competition – netting a 13-pound, 6-ounce catch on the first day of the tournament – his bite really tailed off over the next two days. As such, heading back to the weigh-in scales today, Dobyns was resigned to a top-five finish. But what Dobyns didn’t count on was the fact that the entire top-10 would struggle mightily as well on the day that mattered most.

“I’m still humbled, still frustrated and still stressed out,” said Dobyns, who turned in a total catch of 27 pounds, 15 ounces to grab the runner-up spot. “It’s been a brutal last couple of days. Today, I only had one fish in the boat at 1 p.m. and my co-angler partner had already culled about 10 times. But I managed to run up river and scratch out a limit. Coming back, I was just hoping to finish in the top five. But to finish in second place, that’s unbelievable. I’ll take it.”

Dobyns said that used a Yamamoto Senko and 6-inch green pumpkin Robo worm to land the majority of his catch. Although Dobyns initially targeted spotted bass hanging out on flats, rocks and deeper cuts in the 40- to 50-foot range, he was forced to abandon that strategy in the finals and run up the Sacramento River in an effort to just get a limit.

But whether it was by design or a little bit of luck, Dobyns eked out a second-place finish during crush time.

“It was humbling but I had a great week considering everything that happened,” said Dobyns. “It was a great tournament overall and I had a lot of fun.”

For his efforts, Dobyns walked away with $12,000 in prize money. 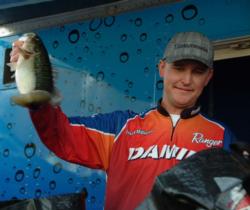 “I fished my very first bass tournament on Lake Shasta when I was 8 years old and have been hooked ever since,” remarked Milligan on how far he’s come over the years as a bass angler. “I was around a lot of quality fish this week, but I had a hard time getting those big bites. I really had to grind it out. But overall, I’m pretty happy.”

Milligan said that he used a combination of wacky-rigged Senkos and a “light” Carolina rig equipped with a Damiki Air-Pocket worm to land the majority of his catch.

“I basically targeted flats with isolated rock piles throughout the week,” he said. “That’s where I had most of my success. But you really had to be patient.”

In the end, Milligan said he was more than pleased with the final outcome.

“Like I said, overall, it was a good tournament,” he said. “It feels really good to finish in third place against 150 of the best anglers in the West.”

Meyer moves up the ladder to claim fourth 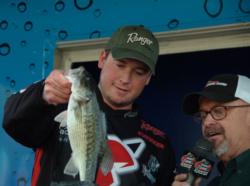 After squeaking into the top-10 cut by a mere 9 ounces, EverStart Series pro Cody Meyer of Grass Valley, Calif., had nothing really to lose. And, to his credit, he made the most of the opportunity – leapfrogging five spots on the leaderboard to finish the tournament in fourth place.

“I had a great time,” said Meyer, who ultimately recorded a 26-pound, 5-ounce catch. “Trying to come back from a 13-pound deficit was a big hill to climb but I was pretty happy with my performance. I just came out here to catch a lot of fish and I had a great experience overall.”

Meyer said that he targeted spotted bass gravitating to rock piles in 15 to 25 feet of water. He also said that he threw a combination of Phenix jigs and jackal flick worms to land the majority of his catch.

In the end, Meyer netted $9,000 in winnings for his efforts. 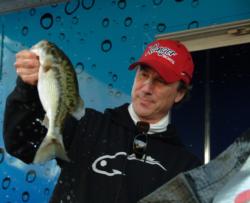 On the strength of a three-day catch of 25 pounds, 8 ounces, Charley Almassey of Oakley, Calif., managed a fifth-place finish.

“I love this lake, especially this time of year,” said Almassey. “During this tournament I wound up doing a little bit of everything. I started off each day fishing shallow with Senkos and then I’d switch up later in the morning and go deep. Then the fish would start moving shallow again, and I’d move back with them. It was a fun tournament.” 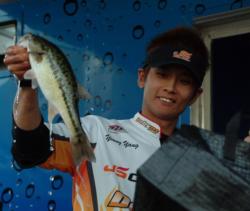