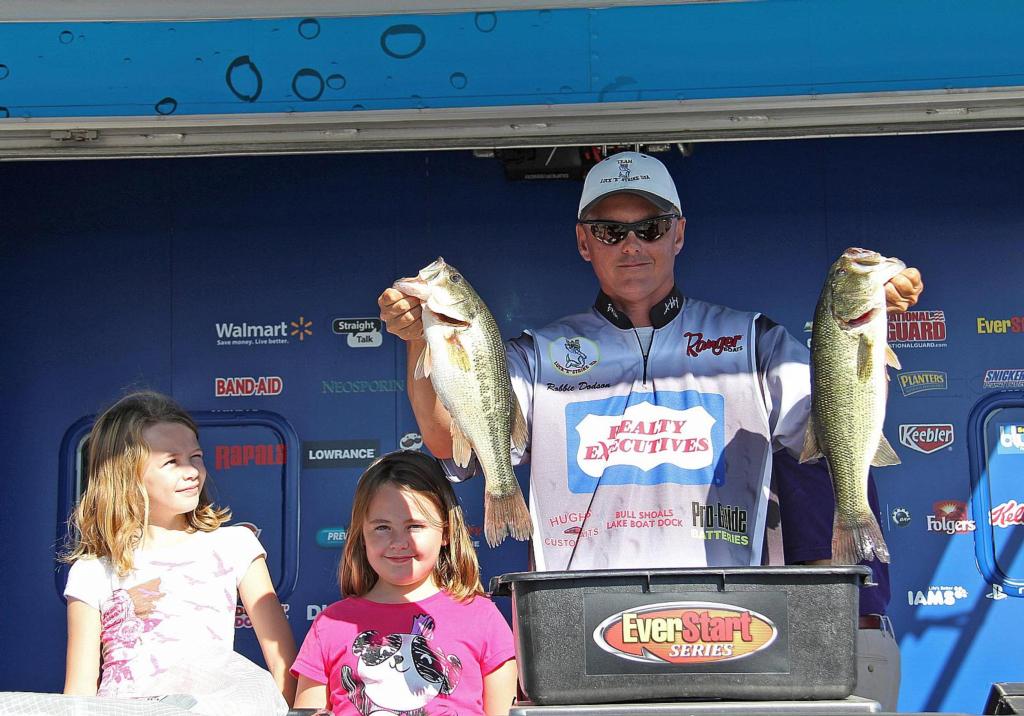 KIMBERLING CITY, Mo. – If you’ve ever really pondered the phrase “It was like herding cats,” you might understand the kind of day that EverStart Series Central Division anglers faced on Table Rock Lake.

This White River impoundment lacks not for both quality and quantity in its largemouth, smallmouth and spotted bass populations. But with the fish on the verge of moving into fall patterns, what anglers found was all those fish scattered all over the lake’s 43,000-plus acres. Some were deep, some were shallow, and some were in between.

The word “consistent” was not often uttered today – at least not in the positive sense. 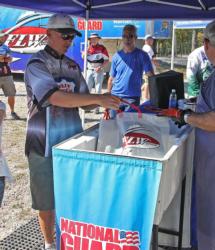 probably felt as much like detective work as it did fishing. Happy to at least have a trio of keepers, Fox said the difficulty came down to a great scattering of fish thanks to the fall transitional period.

“This is a great lake; there are more big fish in Table Rock than in (many other major lakes),” he said. “The problem is that there are a lot of suspended fish out there, and when they do that, they’re really hard to find.”

The Professional Division saw just seven limits – one of which belonged to Robbie Dodson of Harrison, Ark., who topped his fellow pros with a 15-pound sack. While certainly rewarding, Dodson said his day was nothing short of confounding. 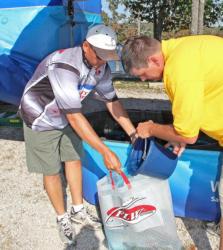 Dodson caught his fish on a Lucky Strike Series 3 squarebill and a 1/2-ounce Lucky Strike spinnerbait. He said he fished about 100 spots and quickly realized this was going to be a classic needle-in-a-haystack kind of deal.

“When I started trying to pick out a good spot, I didn’t catch anything for a long time,” he said. “When I just (randomly) went somewhere, I caught a fish. I was just covering a lot of water.

“It’s just a crazy bite. I fished here the last three or four days, and I had more bites today than I did in two of those days put together.”

Bites were spread throughout the day for Dodson, with two of his fish coming in the morning, one at midday and two in the last hour of his fishing time.

Coming in a little under 2 pounds off the lead, Matthew Jones of Spokane, Mo., weighed a limit 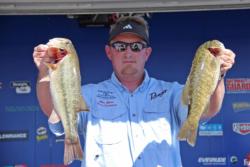 catch of 13-2. For him, depth was the key factor in his Table Rock strategy.

“There’s a lot of suspended fish right now, and the water down here is very deep, so I made a long run to where they can’t suspend – I’m fishing shallow,” he said. “This prevented me from spending too much time just fishing deep water so I could concentrate on the shallow water.”

Jones worked a 6-inch Strike King jigging spoon over structure and fished shallow with a Storm Wigglewort. The spoon produced two of his fish – including his biggest – and the Wiggle Wart nabbed the other three. 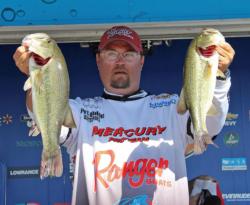 One of the few to actually express enthusiasm over what he encountered today, Earl Garrison IV sacked up a limit of 12-10 and placed third, just 8 ounces behind Jones. In truth, Garrison was as enthused over what he didn’t weigh as he was over what he did.

“I missed two giants on topwater this morning,” he said. “I was fortunate enough to get one nice one on topwater, but then I jumped off a 3 1/2-pounder on a spinnerbait, and then I broke off another monster on a boat dock this afternoon. I really feel that I should have had 18 to 19 pounds today.”

Tom Murphy of Richland, Mo., caught a limit that weighed 11 pounds, 5 ounces and took the fourth- 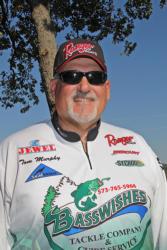 place spot. A shaky head and a spinnerbait caught smaller bass today, but jigging spoons in 60-feet-plus did the trick for bigger fish on this difficult lake.

“Every fish I’ve caught has come on a spoon,” he said. “I’m fishing two spoons: a ¾-ounce Dixie Jet spoon and a War Eagle spoon. I’ve been practicing with a spoon for about a week here, and I won a tournament last week, and (all of the fish) came on a spoon.”

Payne mixes it up for co-angler lead 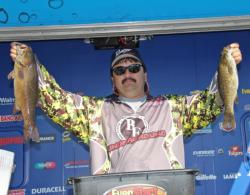 Arnold Payne Jr. of Noblesville, Ind., caught three fish that weighed 6 pounds, 7 ounces to take the early lead by a 10-ounce margin. Payne caught his fish on a shaky head, a Carolina rig and a spinnerbait.

“I caught my fish on three different baits, so there wasn’t anything to it,” he said. “I just picked up a different one and threw it and tried another one out. I’m not on a certain bait. There’s no consistency.”

Payne said he caught his fish in 5 to 30 feet. His bites were spread throughout the day.

Melvin McNeal took the Big Bass award on the co-angler side with a 3-pound, 2-ounce fish.