Dodson holds on at Table Rock 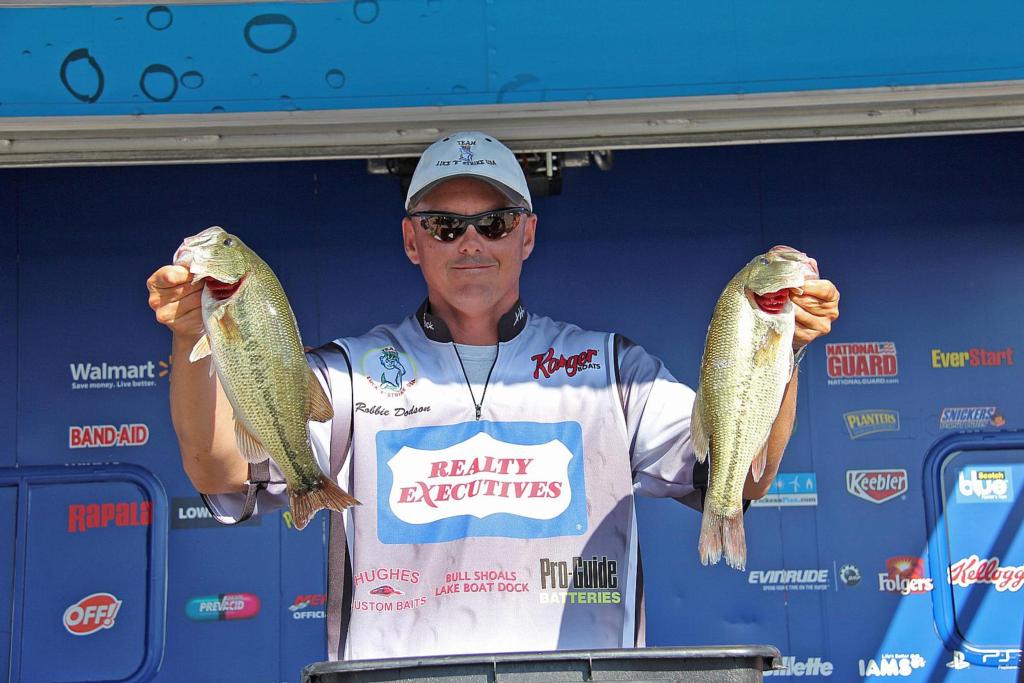 KIMBERLING CITY, Mo. – The numbers were up a little from day one, but EverStart Series Central Division anglers discovered that for the second day in a row, Table Rock Lake is simply not in a generous mood.

A gradual fall transition that’s waiting for a significant cool-down, has the fish strewn all across the lake and throughout the depth ranges from the shoreline to offshore structure. Many long faces crossed the stage today and some of Table Rock’s most accomplished veterans expressed dismay at the humbling experience of fishing baits that should have worked in spots that should have produce, only to have their expectations trounced. 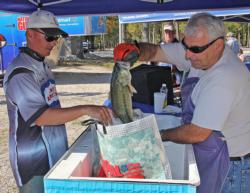 moments. Such was the case for day-one leader Robbie Dodson, of Harrison, Ark. After taking the top spot yesterday with an even 15 pounds, Dodson held onto this position today, but saw his productivity decline with a day-two limit weighing 12-2 and a two-day total of 27-2.

“I didn’t catch a fish the way I had been catching them, so finally I tied on a 5/16-ounce Luck E Strike jig with a 2 1/2-inch Fighting Craw and just started flipping and luckily caught five,” he said.

Dodson’s day started out slowly and it was this dearth of activity that compelled him to switch gears.

“I caught most of my fish in the afternoon,” he said. “I fished crankbaits, like I did yesterday, most of the morning and never caught a fish. It’s tough.” 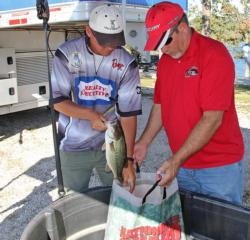 Compared to the 100 spots he fished on day one, Dodson said he upped that total by 50 percent today. As the day wore on, he realized that in Table Rock’s current state of flux, the window of opportunity opens barely a crack. Hesitation or poor timing may shut that opening in a moment.

“I fished a lot of places where I’m used to fishing, and even though I couldn’t catch a fish on (most of them) you have to hit every one you go by that you think might hold fish,” he said. “If you happen to miss the little bitty keys, you might not catch a fish at all.”

Dodson said his efforts took him through a diverse range of depths. Some of his fish came in six inches of water, while others were as deep as 12 feet. 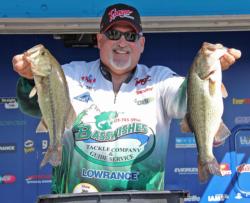 Going into day two, Murphy had intended to grab a quick limit on brush piles with a shaky head and a spinnerbait and then hit docks to upgrade. The brush yielded only one fish, but fortunately, the docks picked up the slack and filled out his limit.

“I caught a keeper (largemouth) right off the bat on a brush pile, but after that I didn’t catch another fish on brush and I had to go back to my primary technique on the docks,” he said. “I caught them primarily on a spoon, but I was also throwing a green pumpkin football head jig with a Strike King Rage Craw trailer in there, letting it fall and dragging it. I was trying to get some smallies today, but I had all (largemouth) today.”

Murphy said that the day’s solar progression, plus the week’s windy weather have kept him in suspense for more than half of both fishing days.

“I haven’t been getting a limit until two o’clock both days and today was no exception,” he said. “The sun gets high and those fish get into shade. That’s the key to my bite – sunshine and shade. The wind didn’t help me either – it was hard to keep my boat where I needed it.” 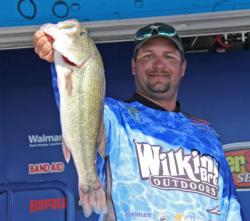 He caught the biggest fish of the day (5-pounds), he weighed the biggest sack of the tournament and he more than doubled his day-one weight. It was no surprise, then, to see Zach King making a big move from 14th place to third on day two. Pairing yesterday’s 7-5 with his 15-2 today earned King a final-round berth with 22-7.

King used a handmade shallow-diving balsa crankbait in shad color. He said the bait’s buoyancy plays a big role in its fish-attracting action.

“I like this bait because of the square lip and when it hits a piece of wood, it darts off of it,” King said. “It does a lot of shimmying and shaking like a shad and when it darts off, the fish will absolutely smack it. All of my fish came on that bait.”

King’s day started with a bang, as that 5-pounder broke the ice at 8:30. “That was a good start. That was my first fish of the morning and it kind of calmed me down a little bit.”

After losing three big fish on day one, Earl K. Garrison IV was eager to return to are area that clearly 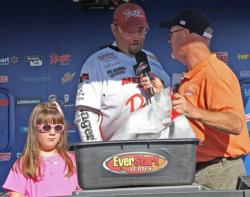 held the quality he sought. Today, the spot dried up and Garrison settled for a 4-fish bag that weighed 7-14 as he dropped from third to fourth with a 20-8 total.

“I struggled all morning,” he said. “I never had a fish until 12:30, maybe one o’clock. I just picked up a 1/2-ounce War Eagle spinnerbait and just covered as much water as I could and caught four solid keepers in the three hours I had left. The fish are so spread out that you don’t catch but one about ever two miles.” 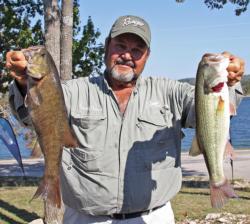 A big run and it paid off for Washburn, Mo. pro Randall Hutson, who gained 11 notches to place fifth today with 19-8.

“About 11 o’clock, I made about a 30-mile run and it paid off because I was able to catch four good fish,” he said. “I started out right (near the takeoff) at the (Highway 13) bridge, fished `til about 10:30 or 11 and then ran up the lake for three hours. I came back down here and caught another 3-pounder.”

When he made his late morning run, Hutson caught his fish on channel swings with a spinnerbait. Upon returning, he caught that final keeper on a jig in about 20 feet. 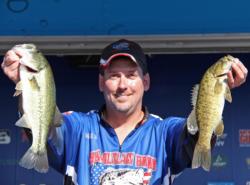 place with a two-day total of 10-9. Heading into the final round, Nosbisch carries a thin lead of just six ounces.

Yesterday, Nosbisch fished a white spoon out deep and today he caught his fish on a jig and a shaky head. Essential to his performance, he said, was an ultra-sensitive rod made by his company, B&R Outlaw Rods.

“The biggest thing for me was, if you’re not feeling them, you’re not catching them,” he said. “The way the rod is designed, it has a lot of strength in it, but it has a very fast tip. I was using lighter line, but when I got a fish, I was able to control it.”

Larry Creech, of Columbia City, Ind. trails close at second with 10-3, while Melvin McNeal, of Circleville, Ohio, took third with 9-12. In fourth place Brett Haake, of Joliet, Ill. had 9-11 and Jacques Fleischmann of Lampe, Mo. was fifth at 8-15. 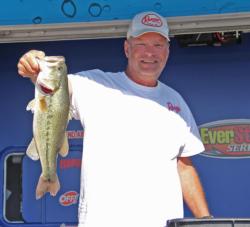 McCullough took the Snickers Big Bass award on the co-angler side with a 4-6.