Dodson pulls ahead on Bull Shoals 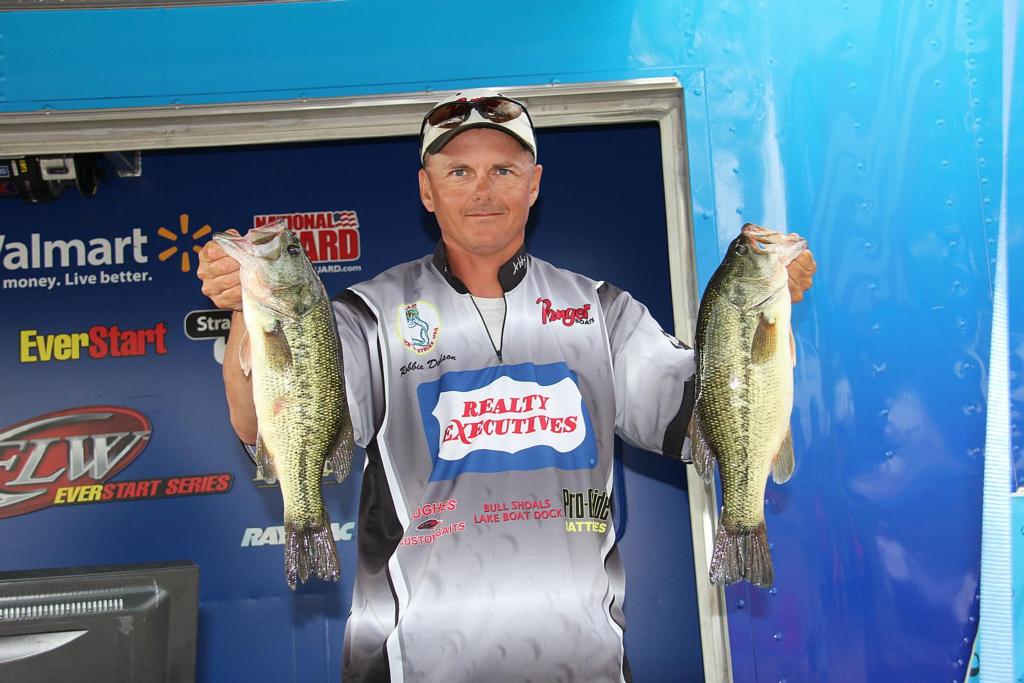 Despite having to change up his delivery, Robbie Dodson still managed to pull into the lead on Bull Shoals. Angler: Robbie Dodson.
April 5, 2012 • David A. Brown • Toyota Series

BULL SHOALS, Ark. – Robbie Dodson trailed the day-one top spot by 12 ounces, but today he finds himself on the other side of the narrow margin, with a 14-ounce lead going into the final round of FLW EverStart Series Central Division action on Bull Shoals Lake.

Amassing a two-day total of 29 pounds, 4 ounces, the Harrison, Ark. pro flipped green pumpkin beaver style baits on day one, but he had to change things up today due to weather and water level. The mostly sunny conditions of a day prior gave way to cloudy skies that threatened rain throughout day two. Without the bright sunlight, fish weren’t grouping as tightly to cover as they had been. Also, the reservoir’s water level for the second day in a row, so all of the fish that had recently moved up to spawn were ushered back a little.

“It was totally different today,” Dodson said. “Yesterday, I was catching them by flipping the bushes, but 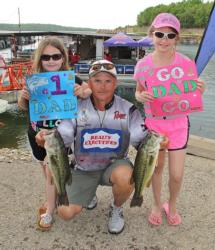 they dropped the lake what looked like 6 inches to a foot last night and I couldn’t get bit by flipping. I went two or three hours without a bite, so finally I went to a 2 1/2-inch Luck “E” Strike Fighting Craw on a 5/16-ounce finesse flipping jig and just started going down the bank casting.”

Noting that the fish still seemed as skittish as they were on day one, Dodson removed the jig’s skirt for a smaller profile. Dodson also enhanced his green pumpkin bait’s appearance by dyeing the claws red.

“They didn’t seem like they wanted to move as much as they did yesterday,” he said. “Yesterday, I saw several fish moving around. You’d be going down the bank and they’d be boiling into the bank chasing shad. Today, it wasn’t anything like that.

“It seemed like they vacated the bank, so I just backed off a little bit and it seemed to work today. Every 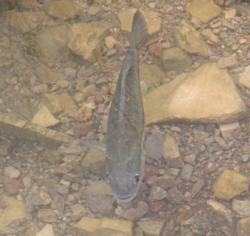 day’s a new day on this lake with them dropping this lake. I may go out tomorrow and not have a bite if I don’t figure out the right little thing.”

Same as yesterday, Dodson fished the Lead Hill area. His productivity, however, was less than half of what he had on day one.

Meredith moves up to second 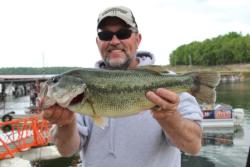 spots from seventh to second with a total weight of 28-6. Targeting classic spawning scenarios of open areas with gravel banks, Meredith fished jigs and Texas-rigged plastics and found a 4-pound, 6-ounce bass in his limit.

“That’s the biggest fish I’ve caught all week,” he said. “I’ve caught a lot of fish, I just can’t find the big fish. I don’t know if they’re prespawn; I’ve only caught one with a bloody tail (a sign of nest clearing).”

Meredith said he caught approximately 30 fish and stayed busy throughout the day. 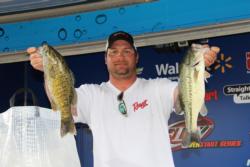 On day one, Clarksville, Ark. pro Zach King found himself in a three-way tie for third place at 14-6. Today, he remained in the No. 3 spot, but shed the company. King’s day-two score of 13-8 secured his final-round berth with a total weight of 27-14.

King stuck with the same one-two combo of Texas-rigged green pumpkin Zoom trick worms and Zoom speed craws that he used on day one. Yesterday, he found fish on the smaller brush between the shoreline and the larger outside brush. Today’s lower water level bumped the fish to those outer bushes.

“I was just fishing bush-to-bush,” King said. “Today, you couldn’t see anything because of the wind and the clouds so I just stayed on the trolling motor.”

After leading the pro division on day one, Dave Crisenberry, of Flippin, Ark. had a tough go of it today 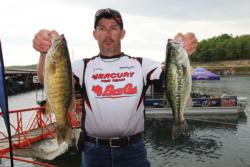 Crisenberry again used the same baits as he did on day one: a Gitzit tube, a 3/16-ounce shaky head with a green pumpkin worm and Alabama-rigged Berkley swimbaits.

“I really struggled today,” Crisenberry said. “I had three fish at 1 o’clock. I finally caught two more fish and culled a couple late this afternoon, but I just couldn’t catch a big fish today.”

Rich Dalbey came into day two in 19th place with 12 pounds, but the Greenville, Texas pro make a big 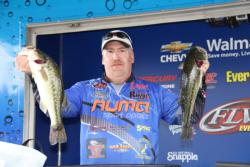 run all the way up to fifth place on the strength of his 14-pound, 13-ounce sack, which increased his total to 26-13.

Dalbey said he stuck with the same dark colored wacky-rigged worms he fished yesterday. He targeted buck brush along the shorelines and had to work hard to assemble his limit. Throughout the day, he found that the slow, methodical presentations worked best.

“This morning I went to a spot I hadn’t fished yesterday, but on Tuesday (practice day) I had a limit by 8:30 a.m.,” he said. “I just kept grinding it out and going to different spots. I had to fish really slowly. It seemed like they were all on the outside edges of the bushes.

“If I moved the bait too fast, I couldn’t get bit. I just had to keep at a steady pace and let that worm flutter down there. A lot of times, they’d hit it when it was on the bottom.” 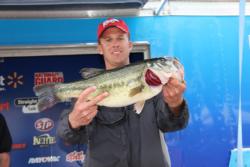 Rounding out the top-10 pro leaders at the Bull Shoals event:

Keith Williams, of Billings, Mo. caught the biggest sack of the tournament (19-15) and earned Snickers Big Bass honors for his 5-pound, 13-ounce bass.

David Gillham, of Heath, Texas began, day two in sixth place with 9-14 but after adding an even 12 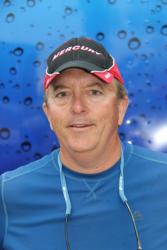 pounds today, he climbed five spots to the co-angler lead with 21-14. Today he flipped a Zoom brush hog and fished 5-inch Senkos on wacky and Texas rigs.

“If a bank was a little bit steeper and the brush was a little bit deeper, I’d through the Texas -rigged brush hog,” Gillham said. “I’d throw the Senkos on the shallower banks. They’d pretty much hit the baits on the fall.”

Steve Gregg, of Florissant, Mo. added 10-14 to the 10-13 he weighed on day one and clenched his final-round spot with a second-place total of 21-11. Gregg, who also placed second on day one, trails the lead by just 3 ounces.

Rounding out the top-10 co-angler leaders at the Bull Shoals event: 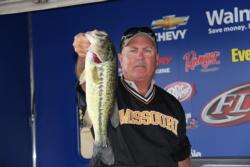 Tommy Lowery, of Ofallon, Mo. took the Snickers Big Bass award on the co-angler side with his 4-pound, 5-ounce fish.