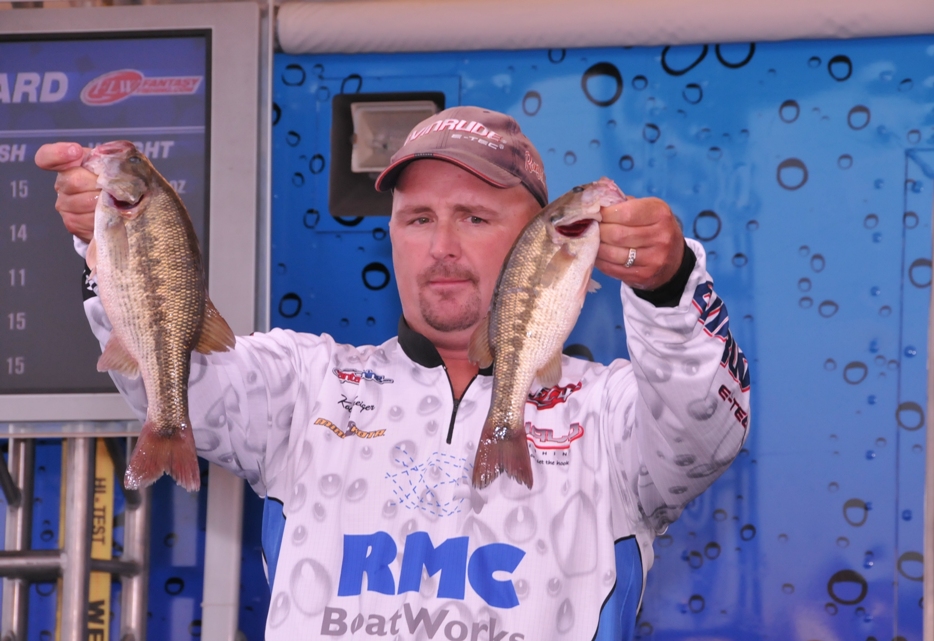 MONROE, La. – The EverStart Championship on the Ouachita River is turning into a two-horse race between a pair of Florida natives who have proven they know how to win tournaments, especially EverStart Series tournaments.

In one corner is the steady veteran Koby Kreiger of Okeechobee, Fla., who has four EverStart wins to his credit. When it comes to grinding bass out on a stingy fishery, Kreiger certainly shines.

In the other corner is the young stick Brandon Medlock of Lake Placid, Fla., who has won the last two Okeechobee EverStart tournaments. Medlock’s fishing style is streakier: one day can be an average catch and the next day he is blowing the doors off the field with the heaviest limit of the event.

Both have fished true to their strengths this week: Kreiger steadily chipping away at Ouachita bass each day and Medlock, completely out of the picture on day one, blasts back up the leaderboard on day two with the tournament’s heaviest catch. And now the two stand neck and neck.

Kreiger still has the lead with 29 pounds, even, but only by 8 ounces.

And Kreiger brings yet another interesting twist to the plot: he has gone into the bayous of Louisiana and is leading the event with the help of none other than the infamous umbrella rig.

That’s not to say he has caught all of his fish on it, but it has been a primary player in his arsenal.

“I’ve caught some on a Mini-Frenzy umbrella rig and the others on Craig Powers’ homemade crankbaits – the CP1 and the CP2,” Kreiger revealed. “If it’s clean open water, I throw the Mini-Frenzy and if there is any cover around, I use the CP crankbaits.”

“With such low flow, the bait is suspended everywhere,” Krieger continued. “Early in the day it’s suspended down there in 15 to 17 feet of water. But as the sun gets up, the bait comes to the surface and that’s when the bite turns on. I do most of my damage from about noon until 2 o’clock when the bait comes up.” 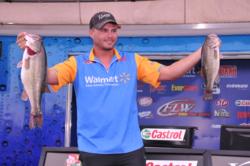 It’s been a weird, wild week for Brandon Medlock. His practice started with a transmission that went down in his truck, making it impossible to tow his boat. Then on the first day of the tournament, he suffered issues with his boat that kept him from reaching his primary areas. As a result, he weighed in just one fish and began the event in 134th place.

But since Medlock has fixed all his mechanical issues, he has been the pro to watch at this event. On day two he rebounded with the tournament’s biggest limit – 14 pounds, 7 ounces – and today he continued on the comeback trail with a 12-pound, 13-ounce limit, which now gives him a three-day total of 28 pounds, 8 ounces, easily within striking distance of winning his third EverStart event.

Medlock’s key bait is the same one he used to win his two Okeechobee EverStart events – the Medlock’s Double-Guard jig – a jig custom made by his dad.

“It’s not the big 1-ounce like I used at Okeechobee,” Medlock said. “Dad poured up some smaller versions – a 3/8-ounce model – and I’ve been trailing it with a beaver-style bait. I’m mostly fishing wood targets with the jig. Yesterday I culled four times, but today I only caught five bass, so I might fish some new water tomorrow.” 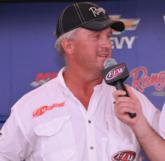 Joseph Kremer of Osteen, Fla., turned up the heat a bit more today to turn in his biggest limit of the week weighing 9 pounds, 1 ounce for a three-day total of 25 pounds, 4 ounces.

Though Kremer hails from Florida he has found a comfort zone at the Ouachita River.

Kent Ware of Wadmalaw Island, S.C., climbed from 20th to fourth place on day three thanks to his best performance of the week – 9 pounds, 14 ounces – which gives him a three-day total of 25 pounds, 4 ounces.

Like Kreiger, Ware has discovered that as the day wears on, the bait rises to the surface and pods up along the bank of the Ouachita River.

“I’m just watching the shad,” Ware said. “When the shad come up and get on the bank, it gets better for me. That’s when I fish the bank with a reaction bait and get a few more bites. The sun seems to be key in getting them to come up to the surface so if we get clouds and wind tomorrow, I don’t know what will happen.”

Larry Jones of Acworth, Ga., rounds out the top five with a three-day total of 25 pounds, 3 ounces.

Jones continues to fish current breaks along the Ouachita River with a Texas-rigged Trick worm.

Rounding out the top-10 pros in the EverStart Championship on the Ouachita River: