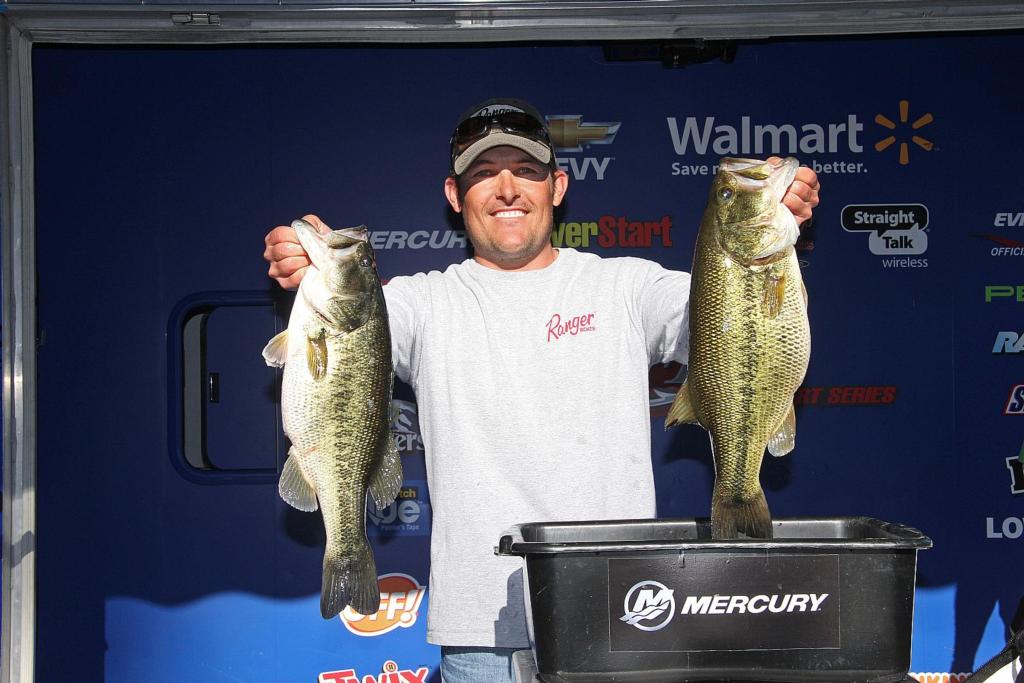 Pro leader Dustin Grice made the most of a fog-delayed day one by fishing close to the take-off site. Photo by David A. Brown. Angler: Dustin Grice.
Hartley takes co-angler lead in EverStart Texas Division
February 14, 2013 • David A. Brown • Toyota Series

HEMPHILL, Texas – If ever there was a Chamber of Commerce day on Toledo Bend Reservoir, day one of the EverStart Series Texas Division tournament was certainly a shining example. However, in terms of fishing, competitors found the deck was stacked against them.

Bright were the skies, cool was the air and light were the breezes – nice for tourism; lousy for fishing. Anyone who’s ever spooled a reel will recognize that description as the dreaded “bluebird” conditions where high pressure and lots of light put largemouth bass – especially those hyper-sensitive Florida-strain sissies – in a really foul mood.

Leading up to the tournament, East Texas had seen several days of torrential rains. The skies started to clear a day before the event and the temperature dropped a few degrees with the arrival of a slight cool spell that delivered today’s difficult conditions. 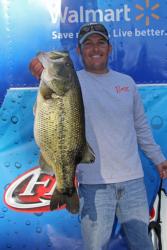 Adding to the struggle, a thick bank of fog settled over Toledo Bend this morning and with no wind to hasten its departure, takeoff was delayed a little over three hours from the scheduled 7 a.m. start. Texas pro Chris McCall lamented the effect of lost time on the ability to make the most of opportunities. “I was in what I consider one of the best places in the lake but that fog delay killed me.”

“I guarantee you the weights will double tomorrow, if not triple,” said Lone Star legend Harold Allen. “Bluebird skies after the weather we’ve had are just tough.”

Now, despite the day’s limitations, a few anglers broke out with a strong start. Leading the pack is Dustin Grice, of Hewitt, Texas who sacked up 20 pounds, 2 ounces. The only angler to break 20, 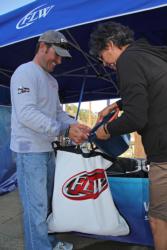 Grice stayed close to the take-off site at Paradise Point. While many of his competitors consumed much of their available time running to distant areas, he spent more time with his baits in the water.

“I was planning on staying close anyway, so (the delay) kind of fell right into my lap,” he said. “I started fishing at 10:30 and I probably didn’t burn but 30 minutes of run time (all day).”

Grice targeted prespawn scenarios around outside grass lines in about 4-6 feet. His primary tool were swimbaits on 3/8- and 1/2-ounce leadheads and spinnerbaits. He used the latter when the wind picked up a little later in the day.

“I was just running to where they’re staging; where the females are setting up to come in,” Grice said. “It got cold last night and I thought they might move out some, but they basically stayed the same.”

Grice said he caught approximately 15 bass today. He ran four different areas and had his limit by 11:45 a.m.

Kelly Owens, of Crowley, La. came in a pound and 9 ounces behind Grice with his limit catch of 18-9. 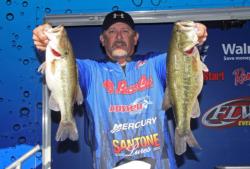 Although he declined to disclose what part of the lake he was fishing, Owens said the fog delay didn’t deter him from sticking to the plan he hatched in practice.

“I went exactly where I had some fish found and just said I was going to stay in this place that I thought was my best,” Owens said.

Moving baits were the general technique and Owens focused his attention on the traditional prespawn ditches and drains were the big females commonly stage on this Sabine River reservoir. Owens said he had to play a little cat-and-mouse, but he eventually located his quarry.

“The fish had moved with the water coming up and with the wind blowing the last day of practice, I hadn’t been back there in a day,” Owens said. “It took me about an hour to find them and when I did, I was able to catch them pretty good.” 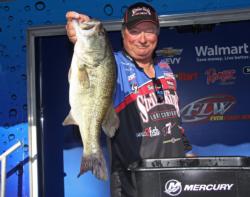 Strike King pro Denny Brauer’s day got off to a strong start and while he endured a prolonged dry spell, he eventually finished out a limit of 16-14 that earned him the third-place spot. Notably, Brauer got his work done on what he initially viewed as a temporary stop. As it turned out, this spot produced all of his keepers, including a 6-11 that earned Big Bass honors.

“I had a spot not too far from here where I had a couple bites the other day when it was raining and being boat 84 (takeoff order), I thought I’d just pull in there and let the boat wakes settle down before I made a long run,” Brauer said. “I didn’t go 20 yards and I pitched over by some grass and caught that 6-11 on the first bite I had this morning. That was a good way to start.

“I just sat down there for about an hour and really ground the area out and caught four (keepers) and one short. I had a bunch of places I wanted to fish on this short day, so I ran a bunch of places where I thought I could catch a big fish here, or catch a big fish there and never had a bite. So in the last hour, I came back to that (original) spot and caught two more keepers off of it.”

Brauer caught all of his fish on his signature Strike King Premier Pro Model jig with a Strike King Rage Chunk trailer. He pitched his bait to grass clumps on 25-pound Seaguar Tatsu line. Brauer said that most of his bites were non-aggressive.

“The big fish really loaded up on it, but after that, they really didn’t,” he said. “In fact, one fish bit three times before I finally hooked him. They’re pretty finicky when they’re doing that.”

In fourth place, Phil Addison, of Baytown, Texas caught an even 15 pounds. The morning delay didn’t 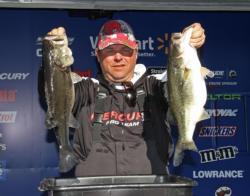 affect his choice of areas, but missing much of the early bite forced him to adjust his tactics.

“These bluebird skies and grass fish don’t mix,” he said. “I caught three keepers the way I had been catching them, but that quit about 30 minutes after I got there so I had to go to a finesse style. I caught them on a Strike King KVD jerkbait early and then I caught them on a KVD finesse worm.”

Addison said he caught his fish in community holes with about 10 feet of water. 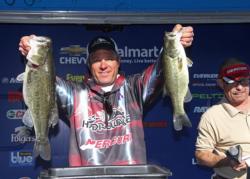 Gene Eisenmann, of Frisco, Texas caught 14-9 to end up in fifth place. He made a big run to a spot on the south end of the lake on the Louisiana side, where he found his fish in what he described as “really shallow” water. With the all-day sunshine increasing the water temperature, Eisenmann banked on increasing activity.

“I wasn’t sight fishing at all,” he said. “I was just in an area where they were piling in. With this warming weather, I just knew that would be the deal and it turned out to be.”

Eisenmann caught his fish on moving baits. He said he had 15 bites, culled three times – including once within the last hour of fishing time. Targeting isolated grass clumps in the middle of pockets was his plan.

Rounding out the top-10 pro leaders at the EverStart Series Lake Amistad event:

Paired with local stick Danny Iles, Howard Hartley, of Berwick, La. had six bites and five of them gave 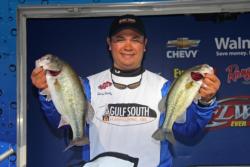 him the co-angler lead with 12-11. Hartley’s bait of choice was a ¾-ounce black/blue football head with a green pumpkin Zoom Super Chunk. He also caught fish on a Carolina rig with a Zoom Super Fluke in watermelon candy.

“If I didn’t get any bites on the jig in a while, I’d pick up the rig,” Hartley said.

Doron Pardo, of Monroe, La. placed second with 11-4, while Rondell Joseph, of Houston, Texas took third with 11-1. In fourth place, Kevin Burks, of Kountze, Texas had 8-14 and Aaron Smith, of Tyler, Texas was fifth with 8-9. 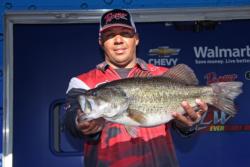 Rounding out the top-10 co-angler leaders at the EverStart Series Lake Amistad event: