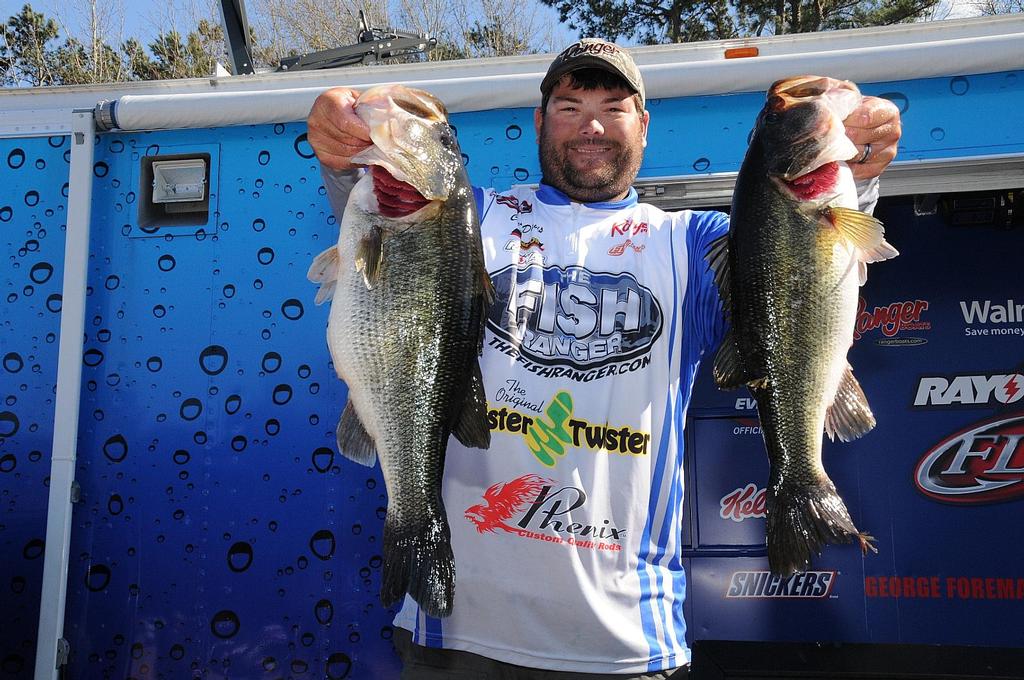 Clent Davis of Montevallo, Ala., had the best fishing day of his life on Santee Cooper today to take the day-one lead in the Rayovac FLW Series with 31-1. Photo by Rob Newell. Angler: Clent Davis.
March 13, 2014 • Rob Newell • Toyota Series

And at weigh-in time, it became evident that the dock chatter was correct as some bags with only three or four bass broke the 20-pound mark.

For instance, Craig Taylor of Tallahassee, Fla., weighed in three bass tipping the scales at 21 pounds, 9 ounces, thanks to a 9-pound, 9-ounce bass that took big bass honors.

Just imagine if someone had bagged five of those brutes!

Well, someone did. Clent Davis of Montevallo, Ala., brought in a five-bass limit that weighed a whopping 31 pounds, 1 ounce to take the day one lead by nearly five pounds.

“That was absolutely the best fishing day I have ever had in my life, bar none!” Davis exclaimed on stage. “It was unreal. I’ve never experienced anything like that on the water before.”

One might think that Davis located the wad of giant bass in practice. But that was not the case at all. Davis, who has been on a hot fish-catching roll of late, finished third at the FLW Tour event on Lake Hartwell last week, causing him to miss much of practice at Santee. In fact, he got just 10 hours of practice for the Rayovac and during that time he never had a bite.

“I just basically went fishing like it was another day of practice,” Davis said. “I scrapped everything I was trying to do in practice and started trying completely new things. I caught a good one early. Then I went a while without a bite and at about two o’clock I ran into the mother lode. I caught four in a row, bam, bam, bam, bam and they were all giants and I left immediately. I think there is a bunch of them like that still waiting to be caught.”

One thing that did become apparent as weigh-in wore on, however, is that most of the big fish weighed in were caught more in a pre-spawn manner rather than sight-fishing off beds. Several pros that did weigh-in sight-fish had smaller limits in the 13-pound range. So it seems as if bucks have made a few beds and now they are busy trying the usher the big girls from out of deeper water down the aisle. 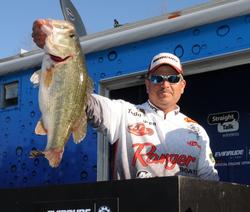 Well-known pro Todd Auten of Lake Wylie, S.C., has taken an interesting approach to his professional fishing career this year. Instead of fishing the FLW Tour, he has instead decided to take on a campaign that is loaded with Rayovac Series and Bass Open level events. And so far the move has proven to be a good one. Coming off a runner up finish at the Smith Lake Open last week, Auten has picked up right where he left off, now he is in second at Santee with five bass for 26 pounds, 4 ounces.

“I spent the day in the upper lake,” Auten said. “I’m fishing out, away from the bank. These are definitely prespawn fish, though I did catch a couple of bucks out there that looked like they had been already been up spawning. So maybe some are on the way out, too. But it’s not a spawn deal at all.”

David Hendrick of Cherryville, N.C., is in third place with a five-bass limit weighing 25 pounds, 8 ounces. 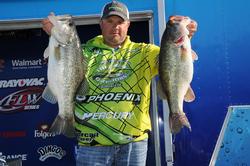 Hendrick said he is fishing the lower lake where low water conditions have made accessing backwaters difficult.

“I almost need a four-wheel drive to get in some of those places,” he joked. “With the wind so bad today, it was blowing waves across those shallow flats. When a wave would come in I could coast on top off it for a bit, but then when it passed, I’d bottom out. Then another wave would pick me up and let me move again. And that’s pretty much how I got in and out of those places.”

Once inside the backwaters, Hendrick said he is having to fish extremely slow for staging fish.

“You can’t get in a real big hurry,” he said. “The slower the better. I caught about nine fish on the day. Once I got to about 25 pounds, I left early to give myself plenty of time to plow back out and run that rough water back.” 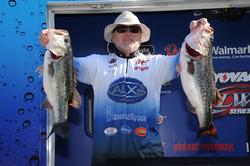 McCoy also made the rough run to the lower lake today and it paid off. He said he had the fifth fish on twice today, but they both came unbuttoned.

“They were all prespawn,” McCoy said. “I’m fishing little dips and depressions down to about four feet. Some of them have trees and stumps. Others have deeper gator grass that sort of drops off quick right in front of it. Those are the kind of places they stage up on down there.”

Brett Mitchell of Timmonsville, S.C., rounds out the top five with a five-bass limit for 24 pounds, 2 ounces. 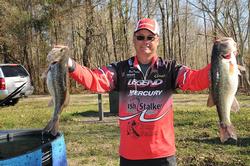 Mitchell contends that all his fish are prespawn bass using little ditches and slightly deeper spots to stage in before moving up on beds.

“The first place I stopped in, I missed seven fish in row,” Mitchell said. “When it gets cold like this they just don’t really get the bait sometimes – I’m fishing super-slow with big baits and they can be tentative when biting.”

“At noon I had just one fish and I knew I needed to move, so I called an audible and went to another place and it was on,” he added. “I caught six fish in an hour and a half and they were all big.”

Rounding out the top-10 pros in the Rayovac FLW Series on Santee Cooper after day one: 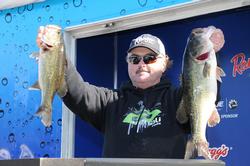 Wendy Kmucha of Harrisburg, Ill., is in second place in the Co-angler Division with four bass for 16 pounds, 5 ounces.

Ken Sharpless of Babson Park, Fla., holds down the third place spot among co-anglers with three bass for 15 pounds, 6 ounces.

Josh Clark of Horton, Mich., rounds out the top five with two bass for 13 pounds, 5 ounces.

Brian Horton caught the big bass in the Co-angler Division on day one weighing 8 pounds, 13 ounces.

Rounding out the top-10 co-anglers in the Rayovac FLW Series BP on Santee Cooper after day one: