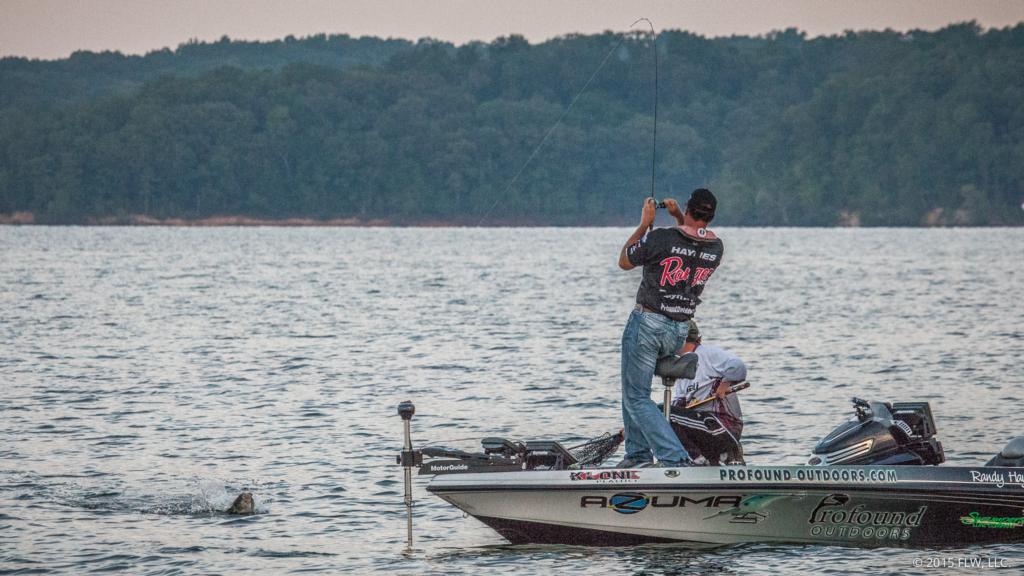 Given the fickleness of Kentucky Lake’s postspawn bass, Tom Redington’s performance in the Rayovac FLW Series Central Division tournament presented by Evinrude was made more remarkable by its consistency.

In what turned out to be a ledge slugfest, Redington lost nary a fish – or at least none that mattered – and chose the right bait from the get-go. Perhaps more importantly, he came as close as anyone to nailing down the timing puzzle and intercepting quality fish moving from the shallows to deep-water summer hangouts.

Fishing during the three-day event was better than many had envisioned, given that the lake had dropped by a foot or so just prior to the opening bell and sent bedding or shallow fish scampering back offshore. It didn’t matter to Redington and a few others who figured out where to intercept the bass along their migration routes however. Here’s a rundown on how the top 10 anglers got there. 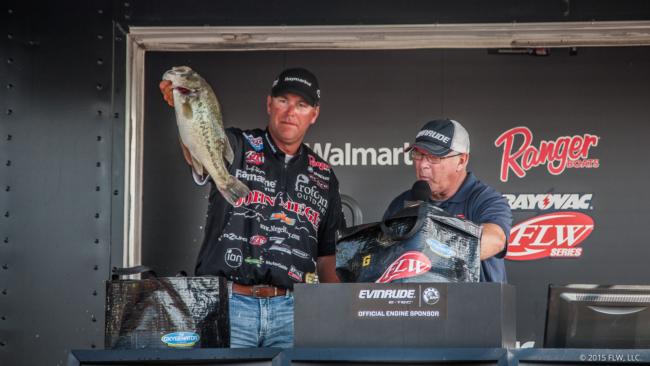 Kentucky Lake set up to Haynes’ liking and he seemed to catch fish everywhere he roamed, from the dam south to Tennessee waters. On the last day, however, Haynes ran out of big fish and lacked the kicker that might have rendered him bulletproof. As it was his 21-pound, 13-ounce limit was one of the best of the day.

Haynes was fishing Profound Outdoors Z-Boss 20 and 25 crankbaits on ledges inside or outside the mouths of major creeks and coves – pretty much the same sort of structure Redington was covering.

“It seemed like the fish were hitting the bait instead of eating it. I got tons of short strikes,” says Haynes of Saturday’s fishing. “The other two days, they were really nailing it. I should have done some things a little differently [Saturday] once I realized they were transitioning. Some of them moved on me too.”

Haynes came within an eyelash of making Rayovac FLW Series history. Had he won, it would have meant a record sixth Rayovac title. At present, he’s tied with Koby Kreiger and Bryan Schmitt with five Rayovac wins apiece.

Read about Hayne’s pattern that allowed him to lead on day two here. 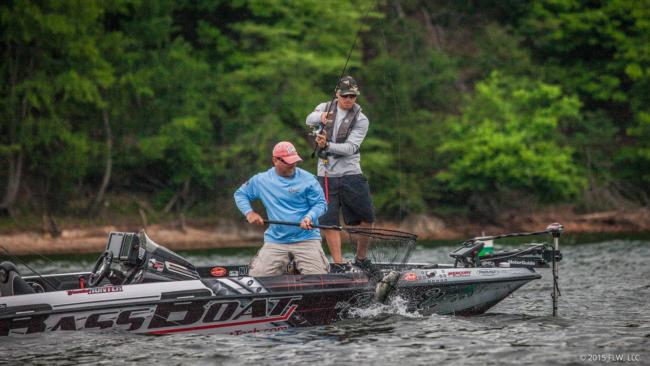 Unlike some of the other top 10 contenders, Hunter caught his fish early in the day. In fact, he had a limit within minutes after sunup the first two days. In the championship round, he struggled to catch a limit early.

“I wound up culling three times, but I was beginning to wonder when the bites didn’t come as quickly as they did the first two days,” says the local favorite. “I was fishing just inside the mouth of a creek not to far from Moors [the tournament takeoff point]. These postspawn fish like to get really deep, so I was fishing in about 18 to 22 feet of water.

Hunter was using a Lucky Craft LC RTO 3.5XD crankbait and a 6-inch Basstrix swimbait in a shad pattern and slow-rolling the latter near the bottom.

“I fished a new spot Saturday afternoon. I saw more bass then, and it should have been the perfect setup, but I couldn’t fire them up to save my life,” says Hunter. “So the early bite was definitely the key for me.” 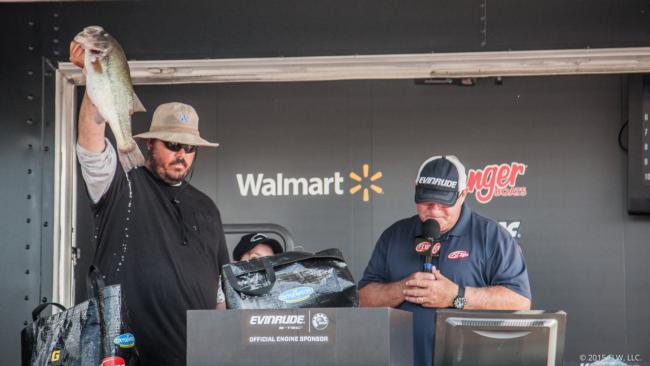 Were he not a bit too masculine-looking for the part, Fields might be the perfect Cinderella for this Central Division test. The local angler only decided to fish Tuesday afternoon, then rode around in his borrowed boat Wednesday afternoon for a few hours. That was practice. Still, Fields had enough experience on the lake to do some damage.

“I used a 7-inch Ignite Baits swimbait the whole tournament and caught fish with it out of 7 feet of water down to 19 feet of water,” recalls Fields. “Really, after Friday I ran out of fish and just went fishing in places where I had caught them before. At about 12:45 today [Saturday] my co-angler and I found a school and caught a 5-pounder apiece. So it was a good ending to a great week.”

Fields was slow-rolling the swimbait along the bottom most of the time, but noticed that burning it off the bottom in the morning drew more strikes. He fished creek and cove mouths from Blood River into Big Sandy Creek below Paris Landing. 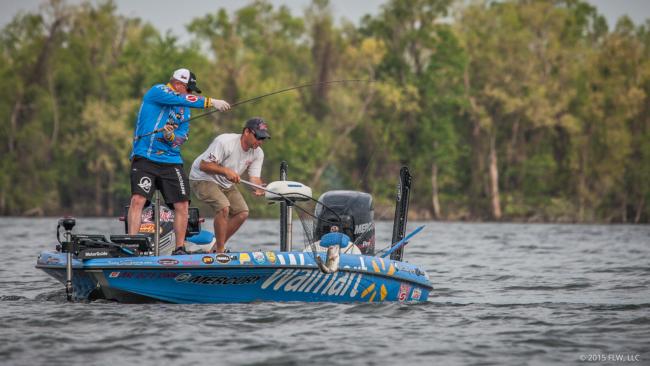 Rose’s best spot was a secondary ledge just inside the mouth of a large cove where the bottom dropped from about 15 to 18 feet. The Walmart pro says the fish were holding more on top of the flat portion of the ledge rather than near the edge. He fished Strike King 6XD crankbaits on 12-pound-test Seaguar fluorocarbon and 8XD or 10XD models on 15-pound-test.

“It was all reaction bites for me,” remarks Rose. “There are lots of fish were I was, but they have bloody tails and they’re sulled up for the most part. Also, I had more company around me Saturday. I let one spot rest, then came back to it later and another boat was sitting on it. I didn’t adjust well after that.” 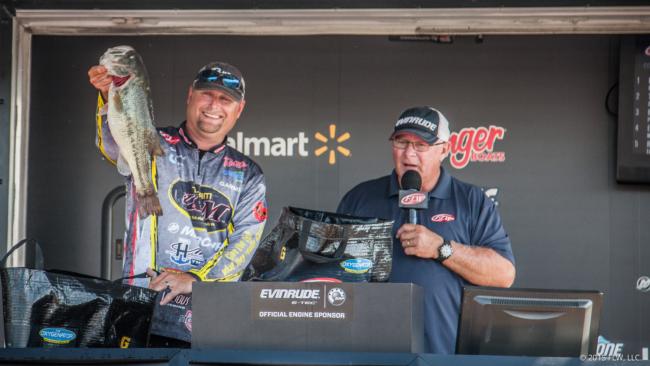 Lambert didn’t think he would make the finals after coming in with a 17-pound, 2-ounce bag Thursday that put him in 19th place, but he rallied with 20-14 on day two and finished with day three’s second best limit: 25-4.

“I got off to a bad start. I don’t think I threw a bait big enough the first day, and when I changed my weights went up,” says the offshore maestro, who finished up the tournament with a 7-inch Castaic Giant Jerky J on a 1-ounce prototype head and an 8-inch Castaic Heavy Metal spoon. “I must have caught 50 fish today, fishing from Moors to Paris on both sides of the lake.”

Like Haynes, Lambert’s fishing approach is to run over ledges and watch his graph. If he marks fish and thinks they’re worth his attention, he stops and casts to them. Otherwise, he moves on.

“I had my limit by 7:30 and culled about 15 4-pounders during the day,” he says. “I fished the swimbait along the bottom and would sweep the spoon and let it fall, sweep it and let it fall.” 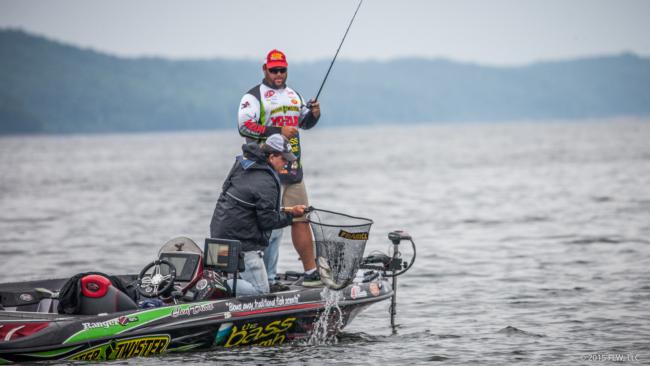 Davis fished ledges, but his were along the main river channel. Davis didn’t settle on his best spot until the first day of competition. In practice, he went over it and never marked a fish.

“The depth where I fished ran from about 17 feet to 27 feet deep, with the fish suspended between 10 and 15 feet,” notes Davis, who was fishing a 7-inch prototype Nichols Lures swimbait, a Profound Outdoors Z-Boss 20 crankbait, a Yo-Zuri Duel Hardcore XX crankbait and a Mister Twister Swimsation.

“With the swimbaits, sometimes they wanted it with a slow, steady retrieve, but today I was burning it back,” says Davis. “It didn’t help that it was cloudy and there wasn’t any current. It kind of spread them out and they suspended. The main thing was to get the bait in their faces. I saw some big gizzard shad, especially up near the dam, and the bass were feeding on them.” 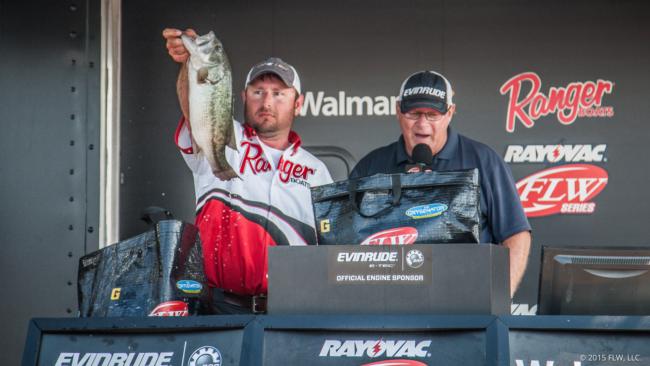 After a slow start Saturday morning, McGuire got on a cooperative school and finished the day with 21-3.

“I saw more fish graphing today than I’ve seen all the rest of the week,” says McGuire. “The fish were higher in the water and I was catching them about 7 or 8 feet deep over 10 or 15 feet of water. The best place for me was around the Highway 68 Bridge. I wish I had fished there the whole time; I realized I had been on the wrong end of the lake and should have stayed north the whole time. At 1:30 this afternoon, my co-angler and I stopped at one place and made three casts and caught three fish apiece.”

McGuire’s most productive baits were the prototype Nichols Lures swimbait and a Z-Boss 20 crankbait. 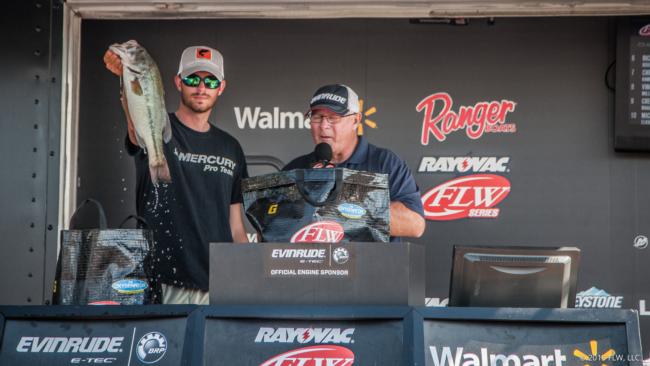 Oddly, Davis spent most of his time fishing above the Highway 68 Bridge and told Saturday’s weigh-in crowd that he regretted not running south instead. He fished farther back in spawning coves than most of the others, though still near creek channels.

The Tennessee angler mixed up his offerings, which ranged from slow-rolled 5- and 6-inch Reflexion and Strike King swimbaits to Texas-rigging 10-inch Strike King Rage Thumper worms rigged with a ½-ounce weight and a bead.

“Definitely, my best bites came in the mornings. Shell beds had to be there, too,” says Davis. “The bait had to be hitting shell. I lost three 4- to 5-pounders today and that cost me because I only caught one fish over 4 ½ pounds. I fished everything on 15-pound-test Seaguar Red Label fluorocarbon. 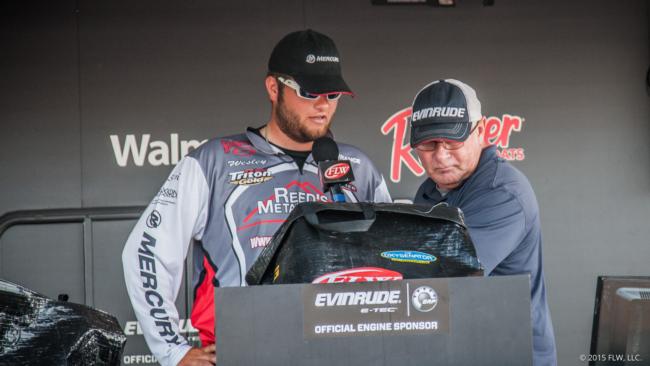 Though he had a decent payday, Anderson could have used a do-over credit. He failed to catch a keeper in the championship round, though he had no trouble the previous two days.

“I went back to my spot, which was toward the back of a spawning cove, and made several casts without catching a decent fish,” recalls Anderson. “Finally, I ran over the spot and never marked anything. What fish were left just went. I think the school I was on was pretty well burned out by all the pressure. I caught fish later, just not the right size.”