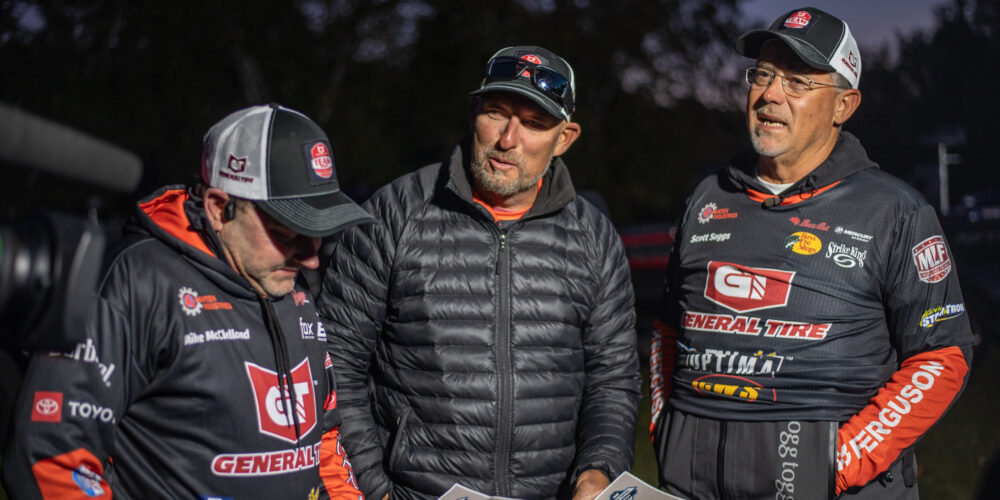 ALEXANDRIA, Minn. – The trio of teams fishing Match 2 of the Lucas Oil Qualifier Presented by B&W Trailer Hitches of the inaugural General Tire Team Series in central Minnesota took to Lake Ida vying for a win and a chance to advance to the $300,000 Team Series Championship.

After one day of fishing, Team Knighten Industries captain Wesley Strader, Mike McClelland, and Scott Suggs were able to place 105 bass and 222 pounds, 15 ounces on SCORETRACKER®. Their banner day equated to a 73-1 surplus over Team Builders FirstSource, consisting of Stephen Browning, Jeff Kriet, and Timmy Horton.

Knighten had a balanced effort, with all three members posting impressive daily totals. In fact, they were the three best anglers on the day, led by Suggs and his 37 bass for 78-9.

As the Knighten team arrived at Lake Ida, they planned to work together immediately to formulate a plan for the lake. According to Suggs, the team knew that each of the three had unique skills and decided to play into that.

“Our game plan was to each start on our strengths,” Suggs said. “During the ride-around, we all looked for something that fit what we wanted to do. It worked out and we were able to catch them in different ways.”

“We were behind near the end of the first period but started to figure it out around then,” he said. “I found a big high spot with good, tall grass around it. I was targeting 8 to 11 feet of water, concentrating on the deeper grass around it with the Thunder Cricket and most of the bites came on any place where the grass formed a point.”

As a testament to their diversity, each team member stuck with their strengths for most of the day without needing to share water.

“(McClelland) got on a good smallmouth bite on shallow docks – he’s an excellent dock fisherman, so he stayed with that plan,” Suggs said. “Wesley discovered a good spinnerbait bite during the morning. Late in the day, I told him the kind of area I was fishing and he found a similar area. He had a great afternoon, fishing deep grass with a vibrating jig. It was a team effort and we all did what we wanted to do.”

At the end of the first day of competition, Builders FirstSource (Stephen Browning, Jeff Kriet, and Timmy Horton) had 149-14 and Smokey Mountain Herbal Snuff & Pouches (Josh Bertrand, Andy Morgan, and Brandon Coulter) had 118-11.

Day 2 of the battle between Knighten, Builders FirstSource and Smokey Mountain Herbal Snuff & Pouches can be seen on Saturday, Jan. 21 from 2-4 p.m. ET on Outdoor Channel.