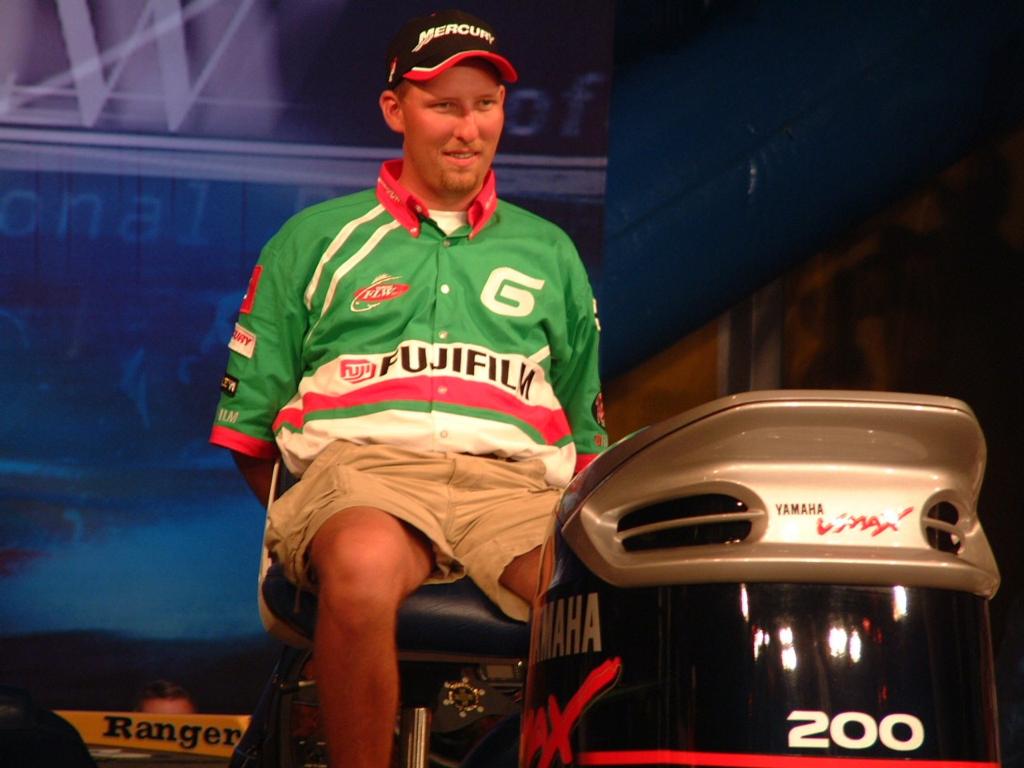 (Editor’s note: This is the final installment of a two-part series profiling the career of FLW Tour pro Wesley Strader. To view part one of the series, click here).

“I was at work with the TVA one day, and I was standing on this 80-foot pole when this helicopter flew by carrying a 161,000-volt electrical cable,” said Strader. “The guy was trying to maneuver the cable to another pole next to me, but he had a hard time controlling it. I knew it was a live wire so I started to scramble down the pole as fast as I could before something happened. I knew it was a dangerous situation.”

Although the following dramatic series of events lasted only a few seconds, Strader acknowledged that those few fleeting moments felt more like a lifetime.

“Before I could get down to the ground, the cable swung out of control and almost hit my pole,” he said. “When I finally reached the ground, a coworker came up to me and said, `Man, you really don’t know how close that really came to hitting you.'”

When his adrenaline had finally started to subside, Strader suddenly became increasingly distraught the more he thought about his too-close-for-comfort encounter with a 161,000-volt cable.

“I started thinking about it, and the more I thought about it, the more it bothered me,” he said. “I could have easily have died that day. And then I got to thinking, `I don’t know if I can do this anymore. I don’t know if it’s worth it.'”

After wrestling with the trauma of the day’s events, Strader decided to sit down with his father, Bud Strader, for a heart-to-heart talk. In short, Strader wanted to know if he should quit the TVA and make a go of it on the professional bass-fishing circuit once and for all.

“He said to me, `If there’s one thing I can tell you, it’s that life is too short to be unhappy,'” said Strader. “He said that if I wanted to quit the TVA and try to follow my dream of becoming a professional fisherman, he would support me. He also told me that it wasn’t going to be easy, but if that’s what I really wanted to do, I should at least give it a try. The next day I went into work and told them I quit.”

For the first time in his life, Strader made the decision to commit full-time to making a living on the professional bass-fishing circuit. However, just as his father had predicted, it would not be an easy road. Still living check to check and struggling financially, Strader eventually convinced friends and family members to bankroll his entry fee – approximately $1,500 at the time – into the first FLW tournament of his career.

After heading down to Kentucky Lake, the site of the upcoming FLW tournament, Strader got in exactly two days of practice before he was forced to head out to Henderson, N.C., to fish in another tournament. It was one of the more grueling trips he could remember.

“After that tournament ended, I drove straight to Gilbertsville, Ky., with only $100 in my pocket,” he said. “It was a rough trip.”

With virtually no practice time under his belt, exhausted and nearly broke, Strader set out to make his mark on the FLW Tour.

“At the Kentucky Lake tournament, I ended up coming in 11th place. It was good enough for a check for $3,000,” he said. “I’ll tell you what. That money I won right there was what really got me started in professional fishing. Because it allowed me to keep on going.”

As 1998 came to a close, Strader used up all of his winnings on Kentucky Lake to pay for an entire year’s worth of deposits for the upcoming 1999 FLW season. However, once the season commenced, Strader didn’t have enough money to pay the remaining entry fee balance he owed for the season’s first tournament on Lake Toho. So, after exhausting all financial options, Strader turned to a former employer for a little help.

“I had a friend who agreed to pay for my entry fee and in return, I told him that I’d give him 30 percent of all the profits I made in winnings. And if I broke even or came out ahead, I promised to return the entry fee as well.”

Although Strader only managed two finishes in the top 30 on the FLW Tour in 2000, he could at least be satisfied with the knowledge that he had finally nailed down his first two sponsors – Fujifilm and Ranger boats. And for Strader, who struggled through a number of disappointing finishes as well as some major health issues during that season, sponsorship was a good enough reward.

“I started out 2000 pretty well, but right before the Mississippi River tournament I got a really bad infection. I could barely stand up or walk and my fishing really suffered,” said Strader. “I was really disappointed and pretty aggravated. But the good news was that I finally hooked up with some sponsors. And although they didn’t offer me a lot of money at the time, their support was worth a fistful of $20 bills.”

With sponsor support steadily increasing and finally back to full health, Strader approached the 2001 season aggressively. With his entry fees already paid up front for the entire season – one of the perks of committed sponsorship – Strader became more concerned with breaking into the top 10 of major tournaments than with worrying about how he was going to pay his next month’s bills. In short, Strader entered the 2001 season with a renewed sense of calm, determination and peace of mind that had previously eluded him during his turbulent career to date.

“In 2001, that’s when I finally started getting the breaks I needed,” said Strader. “In the past, I usually had to make a choice when I was fishing: Should I try to catch a solid limit and make sure I cash a check or should I try to go for broke each day and make the cut? But after I received financial support from Ranger and Fuji, I had the luxury of going for it every tournament. A lot of pressure was off me.”

And it showed. During that season, Strader racked up more than $65,000 in winnings on the FLW and EverStart tournament trails. However, perhaps more importantly, Strader also qualified for the finals of an FLW Tour event for the first time in his career – a fifth-place finish on Beaver Lake that April.

Clearly, things were looking up.

“I think I cashed a check at almost every tournament I went to that year,” he said. “At the end of the season, I was ranked 15th on the FLW Tour and qualified for the championship. It gave me a lot of confidence.”

Final piece of the puzzle

By the time the 2002 season commenced, Strader was a changed man. Brimming with confidence and a renewed sense of belonging, Strader was determined to climb into the elite ranks of the nation’s top bass anglers. In fact, everything was in place for a truly memorable season … and then the Lake Okeechobee tournament arrived. After two dismal days of fishing, Strader found himself in 109th place, searching for answers.

“I had a really bad start on Lake Okeechobee,” said Strader. “And I was really mad at myself because I knew exactly what I needed to do. I just didn’t do it.”

However, instead of sulking, Strader refocused and retooled. Not surprisingly, his determination paid off. In the next FLW Tour event on Lake Wheeler, Strader turned in a masterful performance, qualifying for his second-ever finals and walking away with a ninth-place finish overall.

“I really had some confidence in that tournament,” he said. “I was really in my element, and I was definitely pleased to have made it to the finals.”

After recording a 17th-place finish at the prestigious Ranger M1 tournament on the Mobile Delta, Strader headed to Lake Ouachita for the third FLW event of the season. Little did he know that it would be the defining moment of his career.

“Going into that tournament, I didn’t really have a good practice and I didn’t have a bunch of confidence,” said Strader. “After the first day I was in something like 18th place. Then, on the second day, I made the cut and I thought to myself, `All right!’ because I was really struggling. On the third day, I decided to made a big gamble and ran upriver because little else was working for me.”

It was a gamble that paid off in more ways than one. Not only did his trip upriver net him enough weight to qualify for the finals in fifth place, but it also served to provide Strader with some invaluable information.

“During that trip upriver I figured something out,” said Strader. “I was so excited that, as soon as I came back, I told my dad, `I think I really have a shot at this one.'”

Before heading out at 6:15 a.m. on the final day of competition, Strader thought about all of the encouragement and support he’d been given through the years. However, he also thought even harder about all the naysayers who never believed in his career aspirations to begin with.

“I had a lot of people back home tell me to quit because they thought I was never going to be able to beat these guys on the tour,” said Strader. “But I was determined to prove them wrong.”

Prove them wrong he did. With everything on the line on that final day on Lake Ouachita, Strader reached back into his grab bag of tricks and pulled off the biggest victory of career. With that one cast, Strader had done much more than simply reel in the winning fish. He had reeled in a dream of a lifetime.

On the strength of his victory at Lake Ouachita and his stellar overall performance on the year as a whole, Strader has now set his sights on his next goal: winning the 2002 FLW Championship, scheduled to take place Sept. 11-14 on Cross Lake in Shreveport, La.

However, no matter how he fares at Shreveport, Strader said he would continue to press ahead toward his ultimate goal: to be recognized as one of the greatest anglers of all time.

“I would like to do something that no one else has done before in the sport of professional bass fishing, like win the FLW Championship two or three times in a row,” said Strader. “But when you sit back and think about all of the things you’d like to accomplish, you realize it’s not about the money. It’s just about being the best you can be.”

Whether in sport or in life, whether rich or poor, Strader sees little difference in the way he wants to be perceived by others.

“When I’m walking down the street, I want people to say, `There goes Wesley Strader. He’s a great fisherman, but more importantly, he’s also a really good guy.'”