Going deep into how the tidal ace applies his favorite baits 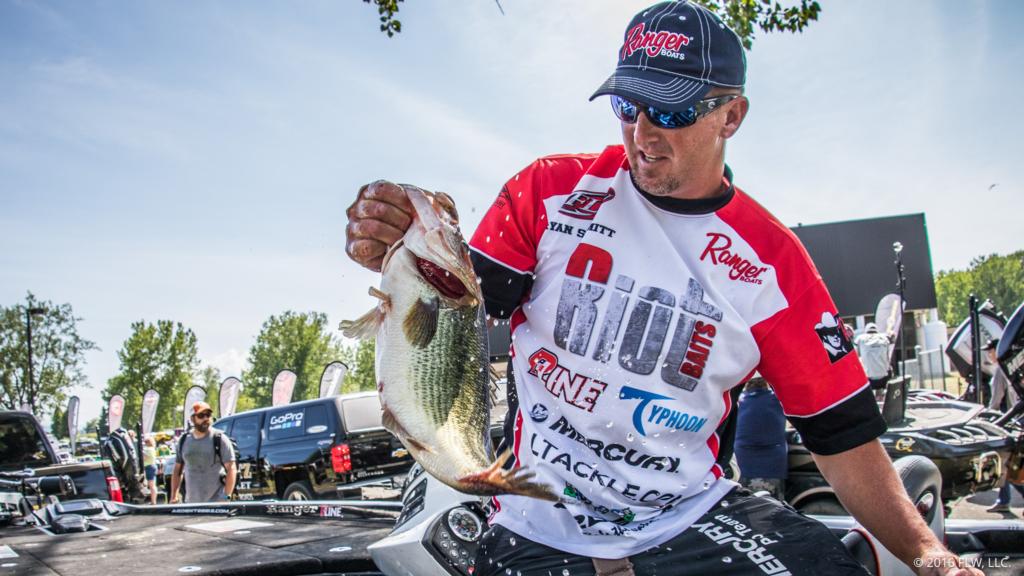 Ever since vibrating jigs burst out of secrecy and onto the national scene they’ve been catching bass. Often referred to generically as ChatterBaits because of the Z-Man Original ChatterBait, the baits have produced plenty of expert anglers. One such expert is Bryan Schmitt.

The third-year Walmart FLW Tour pro has nine career wins on East Coast tidal fisheries, and a vibrating jig played a major role in a many of them. Raised on the grass of the Potomac, Schmitt is one of the best with a vibrating jig in hand anytime a good supply of grass and bass is present.

Fishing on such a unique and pressured fishery as the Potomac, Schmitt has had to develop a few tricks to set himself apart. If you ever wanted to get better with a vibrating jig, the following might go a long way toward putting more fish in the boat. 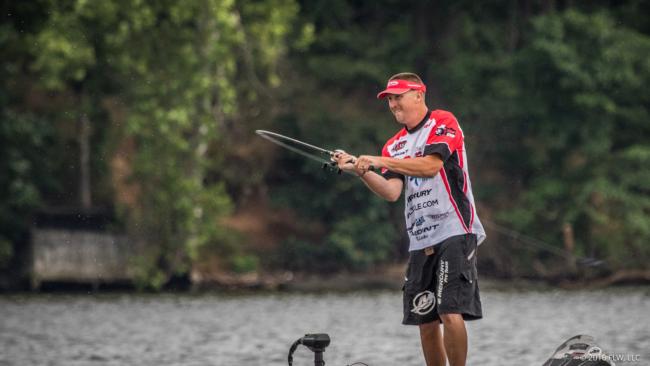 Like anything else in fishing, there’s plenty of variability in how pros tackle up to throw a vibrating jig. Starting simple, Schmitt uses a 7.3:1 gear ratio Ardent Apex Grand baitcasting reel and a 7-foot, medium-heavy-power, fast-action Ardent Edge casting rod. He usually throws 15-pound-test P-Line Ultimate Fluorocarbon, though he’ll vary that between 12- and 20-pound test if he wants to work the bait deeper or shallower.

Schmitt’s rod choice is consistent with most other top-level vibrating jig anglers, though some prefer a fiberglass rod.

“I don’t like a meat stick for vibrating jigs,” says Schmitt. “Even a medium-heavy rod is borderline too much. You want to just load into them, and I feel if the rod is too stiff you pull it out of their mouths.”

While fluorocarbon is an accepted staple for a vibrating jig, it’s not the only line the tidal ace applies.

“Sometimes I’ve put it on braid or mono, and you can sometimes get bites that you wouldn’t otherwise get,” says Schmitt. “Mono puts off a different vibration, and the fish is already hooked before you feel him on mono. That’s one way to get a few more bites. I think every line puts off a different feel, and sometimes that’s what it takes.” 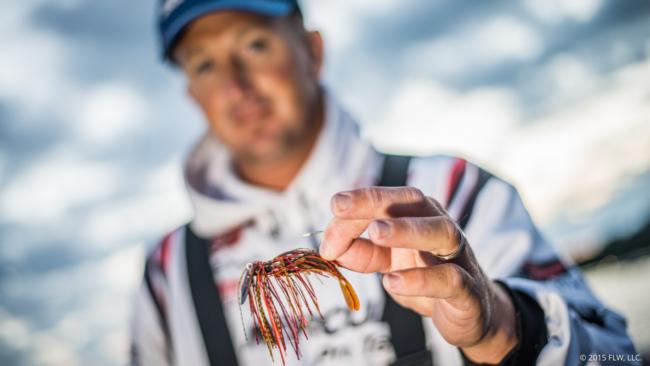 Schmitt’s commitment to dialing into the specific feel or combo is especially apparent when it comes to his bait choice. Starting out, he relied on a Z-Man Original ChatterBait, but today he primarily throws a prototype vibrating jig from Riot Baits called the Recon Vibrating Jig. He used it over the summer to bank a top 10 in the Costa FLW Series event on the Potomac River, but says it likely won’t be available to the public until February 2017.

While having a go-to bait is important, Schmitt isn’t one to lock in to just one presentation.

“I’ve got a ton of baits,” he says. “If you looked at my boat after practice there might be 15 different variations down on my carpet. Sometimes I get all-in on a color or a trailer, but I definitely try to mimic the food.”

Mimicking the food comes down to the color of the skirt and the type of trailer he uses. Depending on if the bass are keying on bluegill, shad, crayfish or anything else, Schmitt likes to match his bait to the forage as closely as possible. When shad are the deal, that usually means white with a matching swimbait trailer. When the bass are feeding on craws, he might go with a red bait and a craw trailer. Regardless of the overall color, Schmitt says that he doesn’t like too much contrast between the skirt and the trailer.

Outside of the skirt and trailer color, blade color can be key and is often overlooked by casual practitioners.

“I’ve had years where I’m all-in on nickel,” says Schmitt, “but it varies. I like the nickel or a dark blade when it’s sunny, but if there are clouds or rain a gold or silver blade seems to produce for me.”

Schmitt almost always uses a 3/8-ounce vibrating jig, but he’ll occasionally use a lighter or heavier jig if he feels the need. 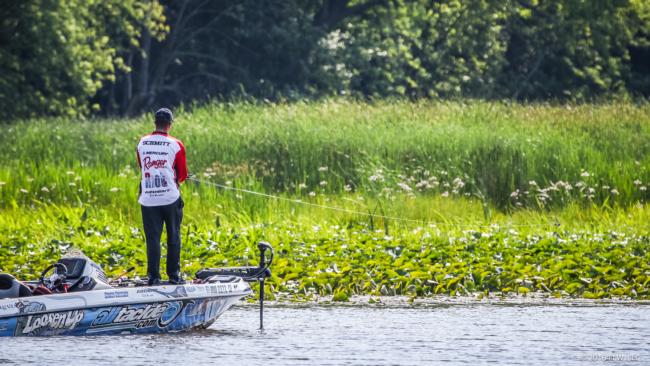 Schmitt’s strategy is heavily informed by how the bass tend to set up in grass beds in tidal situations, which is where he first put a vibrating jig to work.

“I feel like I definitely try to creep it,” says Schmitt. “If I’m fishing sparse grass with 3 to 4 feet of water over it, I try to slow it way down. On tidal fisheries, they’re never suspended. They have to be behind something to block the current.”

Schmitt’s typical slow-winding style of retrieve is easy to recognize if you’ve ever watched him fish. After firing out a cast, the pro usually brings his bait back with a steady, methodical retrieve that is noticeably a touch slower than most of his competitors. Occasionally, he’ll twitch his rod to clear grass from the bait, but most of the time he just keeps cranking along, using the angle of his rod tip to adjust the running depth of the bait.

Schmitt’s other main retrieve is more aggressive, and it paid off handsomely in his FLW Series win on the Potomac in the fall of 2011.

“Ninety percent of the time it’s a straight reel, the slowest I can do it without it bogging in the grass,” says Schmitt. “At times, in any place that is getting a lot of pressure, I will keep my rod tip up and reel it and pop it, and I know I won one tournament [the 2011 event] because of that.

“About 25 boats went to one grass bed on the Potomac. On day two, I threw out and got hung up in the grass and popped it free and caught a 4-pounder. I knew it was on right then. They just had seen so many baits come the same way that they needed something different.”

Occasionally, Schmitt will flip or pitch a vibrating jig as well. Especially in early spring (March and April on the Potomac), he sys he likes to work it just like flipping a jig – flip out, let the bait fall and then hop it up off the bottom. 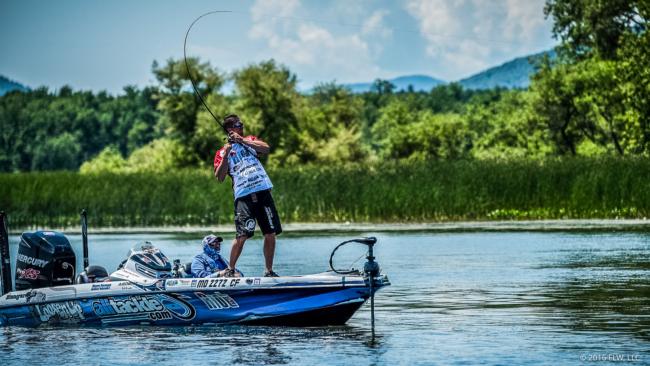 At home on the Potomac, there’s little guesswork for the Deale, Md., pro when it comes time to apply a vibrating jig.

“Prespawn and early postspawn are the best, and then early fall again,” says Schmitt. “When the grass hasn’t grown up all the way yet and they can lie down there and eat all the bluegills and get fat before they sit offshore – that’s definitely a key time. On the Potomac, it’s March, April and then June and July. In May I don’t even throw it.”

While those might be the prime times for Schmitt, he almost always has a vibrating jig or two on the deck anyway, and it’s a pretty versatile bait, as evidenced by his late September win in 2011. 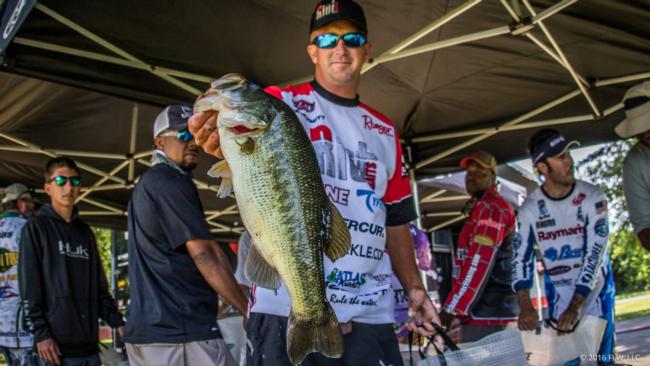 Having expanded his horizons beyond the Mid-Atlantic region now that he’s fishing the Walmart FLW Tour full time, Schmitt has brought his vibrating jig with him.

“I always try to find that pattern wherever I go,” he says. “With the success I’ve had on the Potomac, I feel like I’m a very good grass fisherman. On the first two days of practice on Tour this year, I would always try to fish my strengths. If I could ever find grass with some water over it I’d give it all I could to see if the fish were in it.”

On day one of the FLW Tour event on Pickwick, Schmitt cracked 17-7 in the grass with a vibrating jig and started the event in 10th place.

“Once I saw the grass at Pickwick, I was all-in on that. I started shallow and worked out to the deepest grass,” he recalls. “Once I found the deepest grass I started to catch a few, and then it was all about tweaking the bait and the presentation.”

Eventually, Schmitt settled on a bluegill color scheme with 12-pound-test fluoro to fish deeper. Though he stumbled on the second day, he nonetheless rode that combo to some good points and a $10,000 payday.

“I definitely try to force that envelope if there’s grass. I don’t want to be driving home [after the cut] and see someone chucking and winding in the grass.”