How to Bass Fish High Water in Winter

Tips and tricks to overcome a tough early season scenario 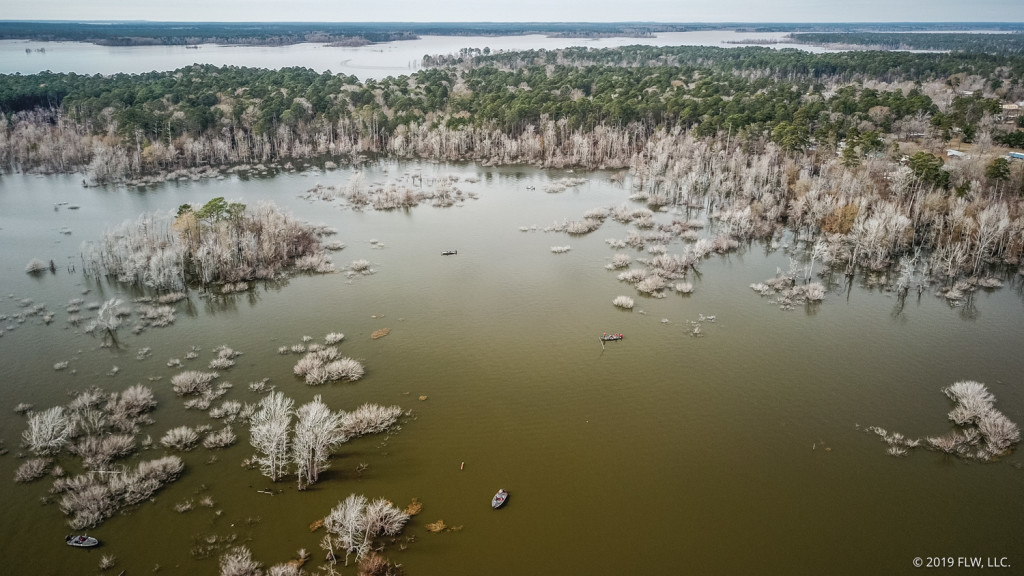 The first stop of the 2019 FLW Tour on Sam Rayburn Reservoir was quite the show. Big bass, big weights and tons of fish made for an impressive start to the season. What’s more impressive is the way pros adapted to adverse conditions to dial in a stellar bite with Rayburn almost 10 feet over full pool by the end of the tournament.

High water isn’t unusual in the spring or summer, but dealing with rising water this early in the year was somewhat of a new experience for many of the pros – as it is for the weekend warrior. Therefore, the Rayburn Tour event is a case study on how to handle this situation and still put loads of bass in the boat. 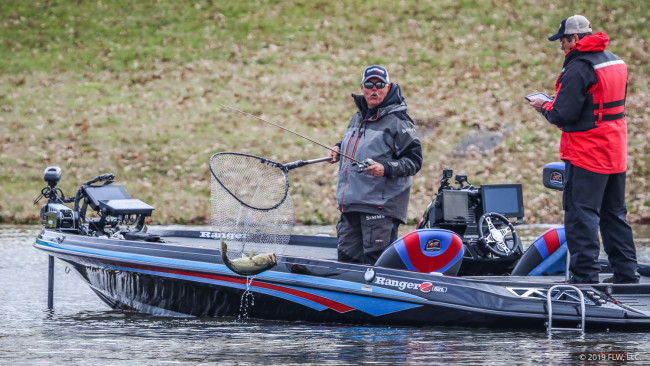 After banking a top 10 on Rayburn a few weeks ago, Tour veteran Jim Tutt has some solid insight into how to approach rising water this time of the year.

“In my experience when you have a fast rise in water in the winter, even though it looks really good up shallow, the fish know it’s not time to go up there yet,” Tutt says. “Sure, some fish go shallow, but the majority of them stay out. It’s different in the spring or summer with rising water because the fish will get in the flooded stuff in a few days. But when the water is cooler they don’t follow that fast. It was pretty obvious by looking at the top 10 or 30 at the Tour event that loads of fish stayed off the bank.”

While flooded timber and bushes certainly can lure in any bass head, the real key is to pay attention to water temperature.

“I think what happened at Rayburn is a good rule for people in general,” Tutt explains. “A lot of guys got to Rayburn and may not fish there a lot or live up north and saw it [the air temp] was 70 degrees in practice and saw the flooded cover and got fooled. If you looked at the water temperature it was around 52 degrees, which is still winter for here. If the water temp was consistently 55 or 56 then there would have been a lot more fish up on the bank.” 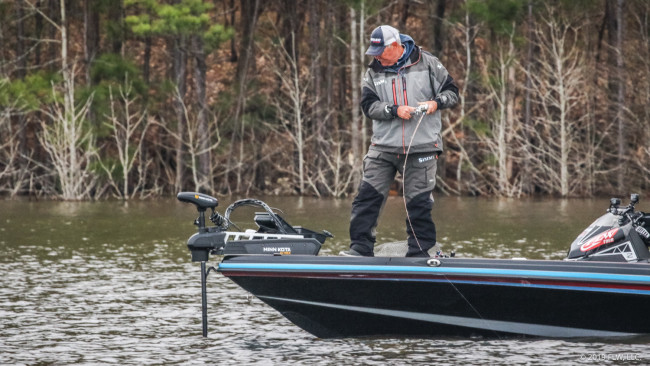 So, if the majority of bass don’t immediately rush to the bank and its plentiful flooded cover in cool water, where do they go?

“When a lake is brand new, just built, fish congregate along road beds and clearings in timber; that’s where fish are,” says Tutt. “That’s kind of how you need to look at a lake when it’s flooded. It’s almost like fishing a brand-new lake when the water is high. You need to find edges or voids in cover.

“The first thing I’d do in this situation would be find a bare bank where it is basically someone’s yard. Two of the places I was fishing on Rayburn were basically a pasture. I’d fish that first. It’s the easiest to find visually. The second thing I would do is look on your depth finder for the original break from the old shoreline where it has a sharper drop-off.”

Around sharp breaks and open areas you can target edges, which are easy places for bass to ambush bait. They’re also two of the easiest places to find without a lot of effort. Sure, it seems obvious, but never discount the obvious. High-percentage spots like this can help get you on fish sooner, helping to piece the puzzle together in a shorter amount of time. Other places of interest that could take some more time to find could be voids in the grass and hard spots in or near grass.

Keep in mind if you get a few bites relatively close to each other you could be on a gold mine. In the winter, fish love to school up as they stage to begin their migration up shallow. So while you might go a while without a bite, once you find them you could be in for great fishing. 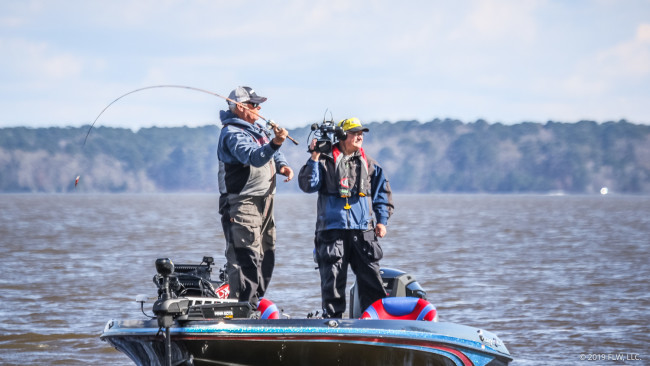 With some likely fish-catching places located, it’s time to get to work. Instinct might tell you to slow down and flip or drag something, but you need to contact fish first. It’s important to cover water.

“With high water there are so many trees and bushes available, but it’s hard to effectively flip all that. You can’t cover enough water flipping,” Tutt says. “That’s why I like moving baits to cover water quicker.

“I choose baits depending on the level of water. You want something that will hit the cover or structure. On Rayburn, for example, that was 8 to 10 feet deep. My favorite is a Norman Middle N, but it wasn’t getting quite deep enough on Rayburn. That’s why I went to the Berkley Bad Shad. But truthfully, you just need something that is going to cover the depth range you’re targeting.”

Other options include a Rapala DT Series crankbait, Rapala Shad Rap, Strike King 5XD or 6XD, and a Rat-L-Trap. Also, don’t discount a 1/2-, 3/4- or even 1-ounce spinnerbait.

“I’ll tell you something that happened the other day that I learned from,” adds Tutt. “The other day I had a friend of mine that wanted to go out on Lake of the Pines. It was pretty chilly, and the lake is high. We got there about noon and fished for a few hours. The water temp was 45. My buddy loves to drag a Carolina rig or a weightless fluke. I pulled out a lipless crankbait and fished it for about 30 minutes and got nothing. I tied on the 5 series Bad Shad, and in three hours caught 14 fish while my buddy never had a bite. I’m not touting that bait as the deal, but reeling it real slow over grass was what those fish wanted. There’s something to that tight wiggle, moved slow over the grass. I was fishing a grass edge like you should, and it was just like how I caught them on Rayburn.” 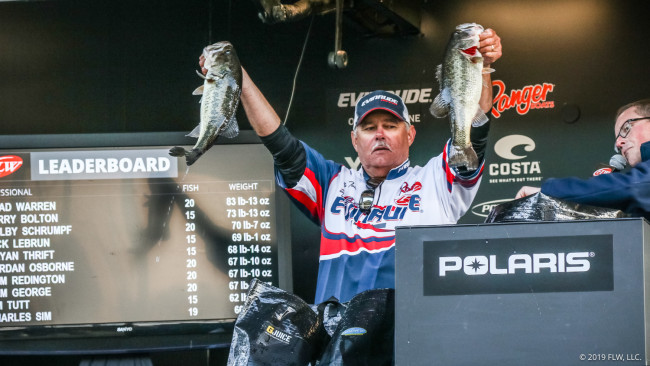 Fishing on a lake that is several feet higher than normal in the winter might not be your first choice when it’s time to splash the boat in, but you can still have some fantastic days on the water. If you keep it simple, don’t discount the obvious and cover water, you could be enjoying great days while your buddies are scratching their heads.