How to chase and target smallies that like to roam 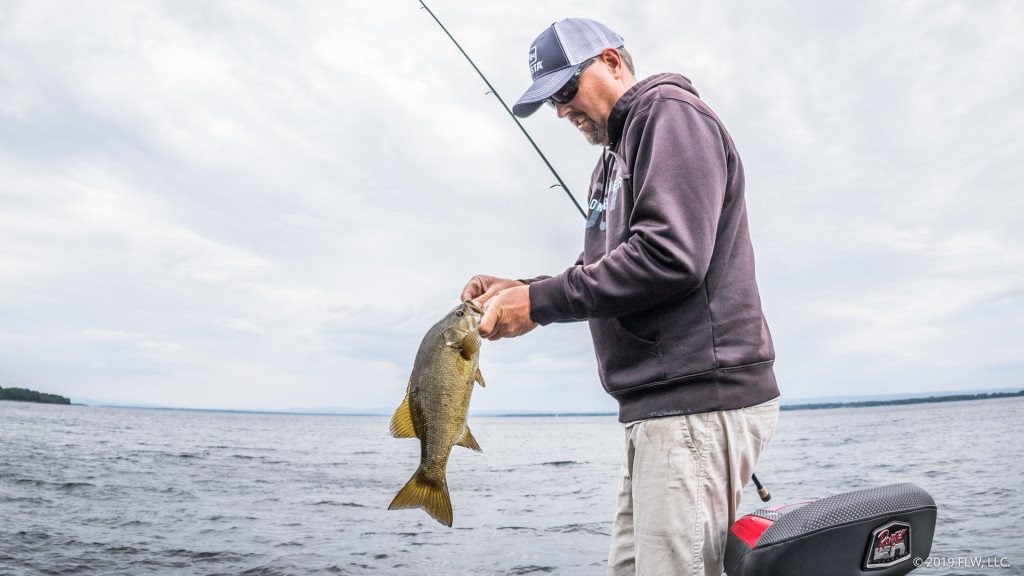 Ron Nelson is a smallmouth expert and likely to be in the hunt for AOY. Photo by Jody White.
August 29, 2019 • Kyle Wood • Major League Lessons

Smallmouths across the Great Lakes region and North Country have no shortage of food to eat, but while they’re very opportunistic, they can also get locked in on certain forage from time to time. One of their favorites, when present, is the alewife.

When smallmouths get locked in on these nomadic baitfish, smart anglers adjust their approach and pattern the baitfish, as well. 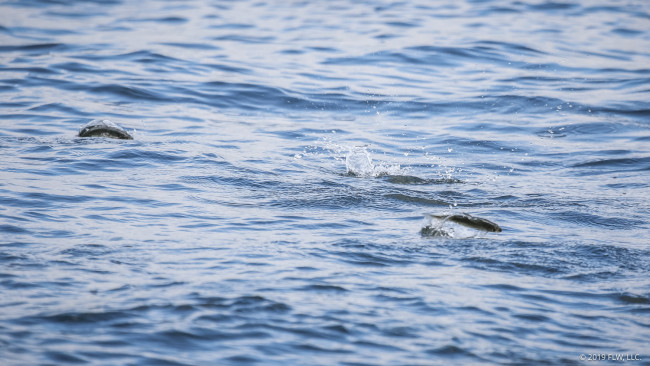 The alewife is a North American shad that’s native to the Atlantic Ocean and its freshwater tributaries. It’s closely related to a blueback herring, and, similarly, there are populations landlocked in freshwater.

Alewives are prevalent in the Great Lakes. They were introduced in the early 1900s, and by the mid-20th century were at peak abundance. Lake Michigan and Lake Huron are their most notorious haunts, though alewives can be found in numerous rivers, lakes and reservoirs that spread from Minnesota to the East Coast.

The alewife is a baitfish that prefers cooler environments. It doesn’t relate to structure, opting to roam a body of water suspended in search of its food – an important distinction we’ll discuss in detail. 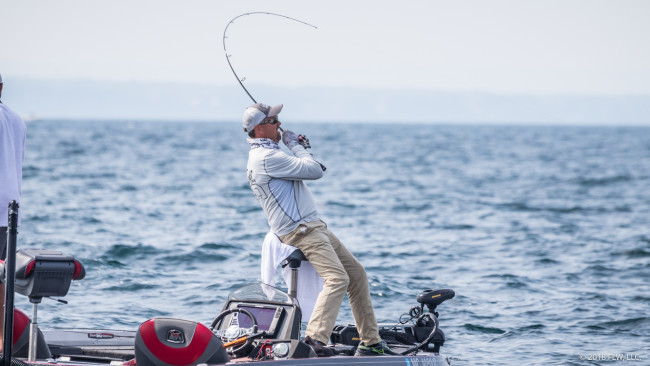 On the Great Lakes

FLW Tour pro Ron Nelson of Berrien Springs, Mich., has spent years chasing smallmouths on Lake Michigan and knows how feast-or-famine the bite can be when the fish are dialed in on alewives.

“I moved to Michigan in the early ’80s, and I remember walking the beach of Lake Michigan when the alewives were so bad that they would wash up on the shore and have to be removed with front-end loaders,” Nelson says. “Their population has gone down over the years, but no doubt smallmouths still love to feed on them. They aren’t the primary forage, but I don’t doubt that there are smallmouths that chase them throughout the year.

“To me, the best time to target smallmouths eating alewives is in the summer when you get the water to flip. By that I mean, when you get a strong, offshore wind, it pushes the warmer surface water away from the bank, pulling the cooler water closer to the shore. That brings the alewives closer to the pier systems and structure, making the bass easier to catch.”

Targeting nomadic bass when they are easy to locate not only puts the odds in your favor, but helps eliminate a lot of water right out of the gate.

“When the alewives come in, the bass know it,” Nelson says. “The water temperature might be 70 degrees one day and 50 the next when it flips. It might last a few hours or a few days, depending on the wind, but you want to make sure you’re out there fishing because it’s a blast. You really just have to pay close attention to the wind to know when it’ll get good.”

Nelson adds that a telltale sign the alewives are in is an increase in salmon and trout anglers on the shore. Those coldwater species also come toward the bank to pursue alewives with the cooler water.

Break walls, piers or even offshore structure a few hundred yards out from the bank are good places to target smallies. Find the bait, and you’ll find hungry smallmouths.

“They are easy to catch in this situation when you get around them. Match the hatch and you’ll catch them,” Nelson says. “It’s a lot of fun. You’ll want to go back out and catch them again the next day, but you have to wait for the conditions to be right.” 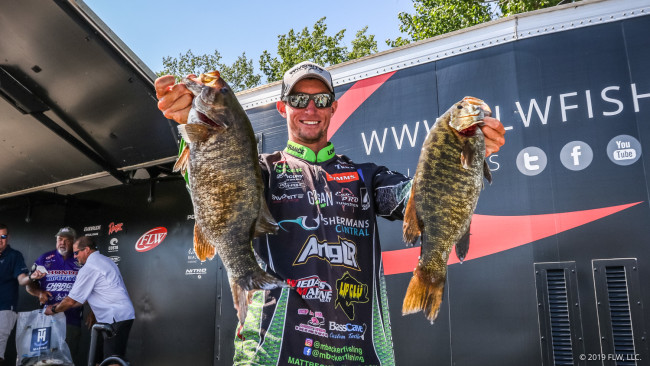 “There’s a reservoir near me that the smallmouths chase alewives on, and from postspawn through the summer is when I target them,” says the Finleyville, Pa., pro. “That’s when those fish are moving out deep trying to recover from the spawn and trying to eat all day. They roam all over the lake chasing alewives anywhere there is deep water – 50 feet-plus. Once they get done spawning, they’re out looking for the buffet.”

Since the bait lives in no-man’s land, that means the smallies do, too. Because of that, Becker relies on his electronics and eyes to locate fish.

“First thing in the morning I’ll be looking for schooling fish, or at least for bait that might be pushed up to the surface,” he says. “From there, I’m idling. The bass are only there to eat. If you don’t see or mark bait, there’s no sense in making a cast.”

Becker runs dual 12-inch Lowrance graphs on his console, with one dedicated to a map and the other split with StructureScan on the bottom half and the top half split between 2D sonar and DownScan. 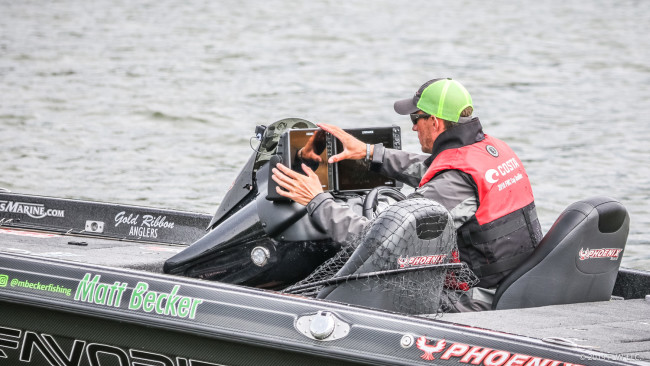 “You can see big clouds of bait on StructureScan, and once you mark that, you can turn around and start casting,” Becker says. “You want to pay attention to what depth you’re seeing the alewives so you know where your bait should be. Sometimes they are 20 feet down over 100 feet [of water], and sometimes in 40 feet on bottom.”

Once Becker starts casting, he’s not inclined to stay in one area for long. If his first few casts don’t yield a bite, he’ll stick around (as long as he’s still marking bait) but try a different offering. If that doesn’t work, or he stops marking bait, he goes back to idling.

“I always pay attention to my graphs or keep my eyes on the surface of the water,” he adds. “Sometimes they’ll school all day, so you need to be alert. Once you find the bait, the bass are usually pretty easy to catch. So, if you aren’t catching any, you probably aren’t around them.”

No doubt it’s a different way to approaching smallmouth fishing, especially if you’re used to parking on structure to catch smallies. For those willing to break the mold, you can get in on some awesome fishing for bass that hardly get pressured.

“You really need to retrain yourself from fishing structure and thinking that fish live on that certain thing to thinking about fish following the bait wherever it goes,” says Becker. “It’s different and took me a little adjusting to get the hang of, but it’s fun.” 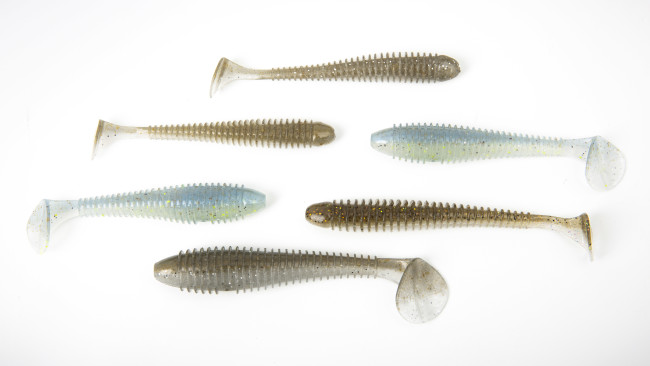 Both Nelson and Becker keep things simple for this application. A 3- to 5-inch swimbait – a Keitech Swing Impact or Swing Impact FAT are favorites – is the No. 1 choice. They both like a swimbait in a shad color rigged on a 1/4-ounce head. An umbrella rig can also be a good choice, since alewives school in big groups. And, of course, you can’t count out a topwater for any schooling activity. Remember, keep things simple. These fish are looking to eat, so there’s no need to overcomplicate things.