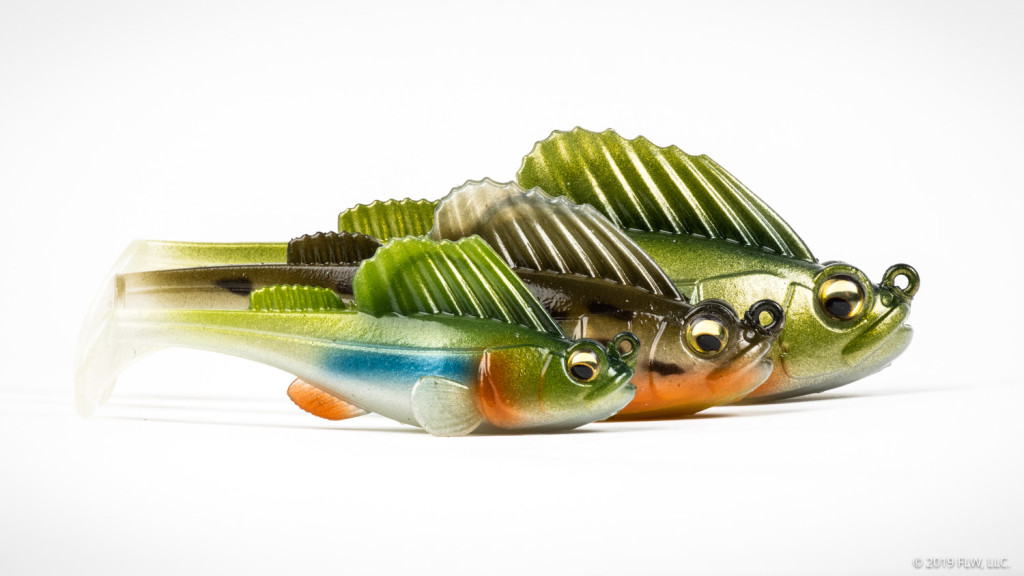 There are do-it-all swimbaits that work pretty well for most applications, and then there are niche swimbaits that excel when put to use in particular ways.

In that regard, the Megabass Dark Sleeper is definitely a niche bait that most bass anglers ought to have in their arsenal. It’s a swimbait, but its size, shape, dorsal fin hook guards and action allow it to be applied in a similar manner as a jig. 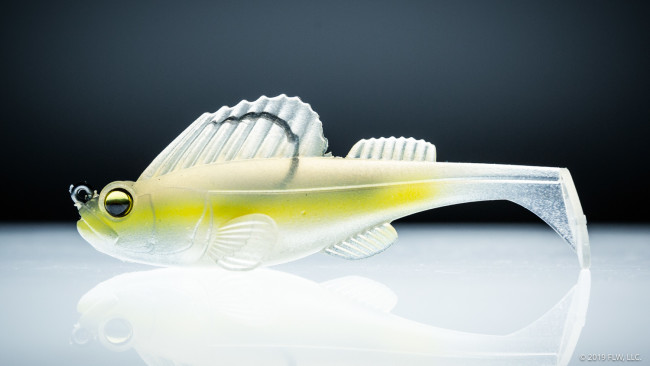 Cool features of the Dark Sleeper

“Even though it’s heavy, it’s got a really small tail that gets to working no matter what,” says Josh Douglas, an FLW Tour pro who also guides for smallmouths on Mille Lacs and other fisheries in Minnesota. “It’s hard to find a 3/4-ounce weight with that small of a hook that still mimics smaller baitfish to fish it deeper. I think that’s probably the best part is how small it is, yet how heavy it is.”

The 2.4- and 3-inch baits are great for smallmouth fishing, particularly up north, while the 3- and 3.8-inch models works well for largemouth-specific tactics and Southern shad-based reservoirs.

Action – The Dark Sleeper’s action is more than just tail kick, according to Cobi Pellerito. He’s a fishing guide from northern Michigan who manages Megabass’ social media pages in the Americas and has fished the Dark Sleeper since it arrived from Japan. Pellerito says the bait has a “frantic” or “spastic” action. It’s more than just the classic back-and-forth.

“Then you couple that with that wider head and it has more of a panicked action than anything you’ll find in a Keitech or even a Spark Shad from Megabass,” he says.

The combination of head width and action actually helps the bait snake through reeds and other vertical cover without snagging. The dorsal fins help, too.

“You’re still maintaining that free-roll and that side-to-side motion that you get with a top hook, yet you’re getting more of the weedless side of things that you could get with a belly weight,” says Pellerito. “That’s why I would choose that bait over one I could just rig myself. It comes rigged and comes ready to go, and it’s able to be fished in different areas.”

FLW Tour pro Ryan Salzman has been throwing the Dark Sleeper on Tennessee River reservoirs for largemouth and smallmouth bass. A lift-drop retrieve around rocks and wood cover is one of his favorite ways to use it, and the Dark Sleeper’s action and dorsal “protectors” work well for that, too.

“Belly-weighted swimbaits are going to fall horizontally; not nose-first,” he says. “So it’s a weedless version of a top-hook swimbait, without sacrificing the hydrodynamics of it, if that makes sense.”

Colors and forage imitation – The bait really looks like a small goby, but it’ll imitate sculpins (which look similar), bite-sized bluegills and shad, too. In the right colors, it’s also a crawfish replica.

Forage imitation dictates the action used in some situations. For instance, hopping or dragging it into rocks then popping it like a tube can imitate a goby or a crawfish. Swimming it on a straight retrieve imitates any swimming baitfish. Ripping it and letting it fall is a good triggering action. The bait’s wide, plastic-covered head also helps it skitter through the rocks on a slow, bottom-bumping retrieve.

Weedlessness and hookups – The dorsal fins are soft enough that they don’t bother hookups very much. Also, the pros queried for this article report that it’s a bait bass tend to inhale deep into their mouths, making hookups pretty easy.

So how weedless is the Dark Sleeper? Around chunk rock, docks, stumps, logs and scattered grass, it’s fine. In thick grass beds or dense clumps, as well as branchy laydowns, the soft dorsal fins can bend over and allow the hook to get snagged. New users will probably need to experiment with it around their common cover types to get a feel for the limitations.

7 ways to fish it

The easiest way to fish the Dark Sleeper is as a search bait, casting it out and reeling it back with a variety of actions – dragging, hopping, swimming. But there are several specific ways our pros fish it that you ought to try, too.

“I just kind of pick it up and set it back down almost like a blade bait,” Douglas says. “I almost fish it like I would a tube on a baitcaster, dragging it a little bit and hopping it off the bottom, just trying to elicit a strike when I know fish are there.”

In the fall, Pellerito fishes a very similar pattern on the Great Lakes where big fish start to congregate on mid-depth rock piles. His description of the best technique is nearly identical to how Douglas does it: “I’m casting it out there and almost dragging it through the rocks and kind of popping it free. It really starts to emulate what a goby looks like on the bottom.”

2. “Swimming” Southern structure – Salzman will use a similar retrieve that he calls “swimming,” but it’s not swimming in the classic swimbait sense. He works it almost like a big Texas-rigged worm: lifting it a couple feet, then letting it glide back to the bottom.

“You could call it stroking a jig, but not as violent,” he says. “You know how some guys will just work a spoon lazily, lifting with their rod tip and letting it glide down? It’s like that. Then you can pull it for a second and just kind of raise your rod tip. That is the best retrieve I have found.”

Salzman uses the technique around stumps, chunk rock and brush for largemouths and smallmouths.

“For smallies I’m throwing the pink and the chartreuse one, and the white one with the chartreuse line,” he adds. “I’ll throw it out and actually be trying to make contact with the rocks. I’m going to throw that swimbait if I want to be down in the rocks.”

3. Swimming grass and reeds – On Lake Guntersville, Salzman has had some success using the Dark Sleeper as a replacement for a swim jig.

The type of grass dictates where exactly it can go. In northern Michigan, for instance, Pellerito fishes it in a similar way through scattered pads and holes in pads, but if the stalks are too heavy it’s a no go. He also fishes it around reeds in the early season.

“Oftentimes, up here in the springtime our smallmouth are pulling up to areas that have reeds, which is often the only vegetation that we have up here,” he says. “So those smallmouth will kind of come along in those reeds, and an open-hook rig gets snagged and can be very frustrating.”

The hook guards and the wide head with its swimming action help it skate through the stalks.

“In that situation I pretty much cast it out and begin a standard straight-line retrieve. You can bump bottom, and you can bump reeds, but for the most part I’ll steady retrieve it just off bottom in the 3- to 10-foot range.”

“If you get hydrilla or milfoil, you can flip it into holes almost like a jig in that situation,” he says. “The way that body is shaped, paired with that tail, that bait will kind of spiral on its way down. And that is something I think is just different than a lot of those fish see. Then you pair the fact that when they grab it, they’re not grabbing on to a big heavy metal head. They’re grabbing on to a soft head because of the plastic. I think you’re able to get those fish to commit to biting or commit to eating that bait significantly better.”

5. Dock skipping – While none of the sources spends much time skipping docks with the Dark Sleeper, it does work well for it. The broad, flat bottom skitters across the surface while the dorsal fins protect the hook from cables and cross bars.

“You can kind of just reel that thing right back out of there, and it’s just going to come a huntin’ and a wobblin’ and bounce right off the posts, bounce right off the motors, skegs – whatever it might be – so it makes a really versatile skipping bait as well,” says Pellerito.

When he does skip, Pellerito usually chooses a 3.8-inch model.

This is one of the better-known methods for working the bait thanks to a YouTube video that was released by Megabass pro-staffer Edwin Evers. The technique is similar to Salzman’s worm-swimming method described above.

7. Vertical dropping – In the winter, Pellerito will vertically drop the swimbait to fish he sees on the graph.

“I fish it kind of like a blade bait. I’ll kind of fish it bottom bouncing; just hopping it,” he says. “As opposed to a blade bait or drop-shot, that thing can do really well.” 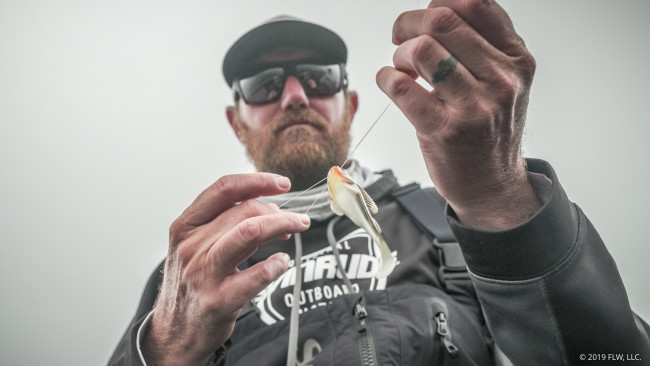 “Even with that weight being in the nose, it’s not like it’s wedging on the nose to get hung,” says Salzman. “It hits on that ‘rubber nose,’ and it just kind of comes through stuff. But if you throw the 3/4-ounce one on too light of line, it’s going to bury down in things. You always want to balance your line size to the weight bait you’re throwing to kind of ‘float’ it as opposed to digging.”

Douglas and Salzman use similar rods for their preferred bait sizes, which tend toward the larger end of the Dark Sleeper offerings. Salzman likes a 7-foot to 7-foot, 3-inch, medium-heavy rod with a fast tip. Douglas uses a 7-5, medium-heavy G. Loomis GLX rod.

“It’s a little softer than I would use for a football jig,” Douglas says. “If I was swimming it more like a Keitech or ExoSwim or something like that, I would use a softer rod yet because I just want them to load into it, but since I’m picking it up I need that hook to peg them.”

Pellerito’s rod choices are similar for the two larger sizes. He throws the 2.4-inch swimbait on a medium-action spinning rod with 15-pound-test braid and a 10- or 12-pound-test fluorocarbon leader.

While this article speaks highly of the Dark Sleeper, realistically it’s just one of several swimbait types anglers should be using. It has a unique panic action and fits a niche for fishing deep water, around cover, through variable terrain and with a lift-fall action. It’s also a great smallie bait. But how you use it is up to you. Pick up a few, and you might expand your swimbait game.