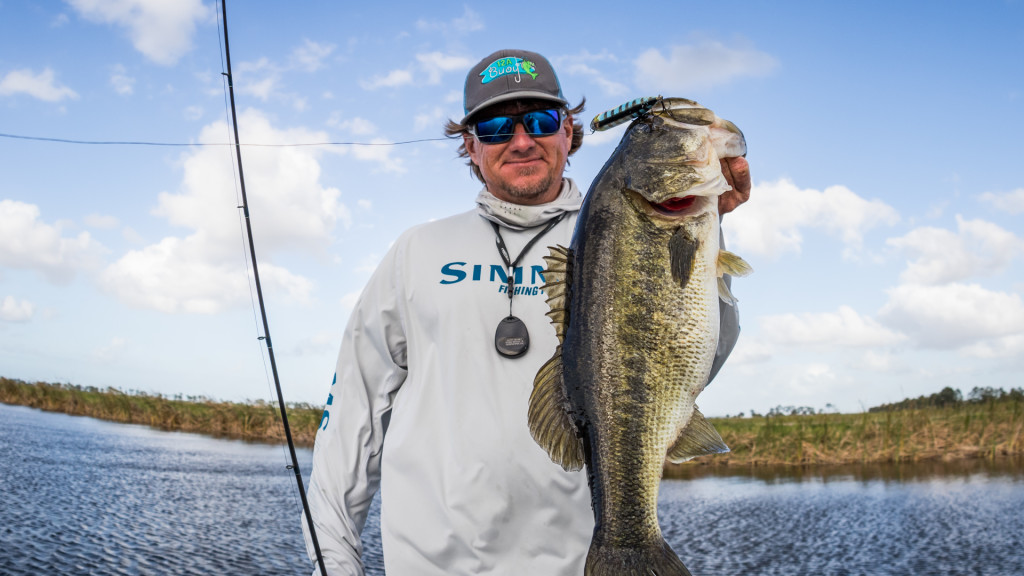 Brent Anderson is a bit of a legend on Kentucky Lake, but for the last two years he’s been guiding in Florida. Because of his location switch, Anderson has had the chance to adapt some of his favorite techniques for the Sunshine State.

“Everybody is fascinated by topwater from the get-go, a little bit because it’s so visual,” says Anderson, who put together a run of extreme dominance on Kentucky Lake with a topwater from about 2009 to 2015. “As far as my success with topwater back when it started on Kentucky Lake, the start was accidental. With what happened the next four or five years, I got a lot more confidence and love for it the more I had success on it. Now it’s more about confidence. I know I’m gonna catch them on it in certain situations, and that situation arises more than most people realize.”

When Anderson started fishing in Florida, he pulled out topwaters right off the bait, but he didn’t immediately turn to his trusty walking baits.

“Last year was my first time to spend a lot in Florida. It’s not like I’m a big Floridian now. I’m not a JT Kenney,” says Anderson. “From the get-go, I started trying topwater down here. The first thing I tried was a River2Sea Whopper Plopper, and to this day I’ve yet to catch a fish on one down here. I never caught a bass on a walking bait last year here. It was all prop bait stuff. This year it’s totally flip-flopped. They could care less about a prop bait, and they want a walking bait, which is much more in my comfort zone.” 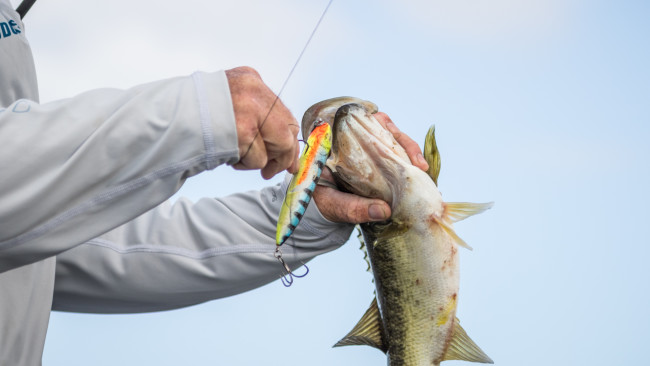 Since spending as much time on the water in Florida as he has, Anderson has applied a topwater a lot more than he expected to.

“Down here, I’m basically fishing the lake like one giant bar on Kentucky Lake, but it’s February or March,” says Anderson. “A lot of people may not even try it, but if the water looks right and it’s the right depth, I always try it. Basically, you need about 2 foot of water or less over their heads to catch them.

“I feel like there’s always a topwater bite happening in Florida. For the prop bait, there almost has to be very little wind, clam and slick – sky conditions don’t seem to matter. With the walking bait, they don’t care. I’ve caught them in chop and slick sun.” 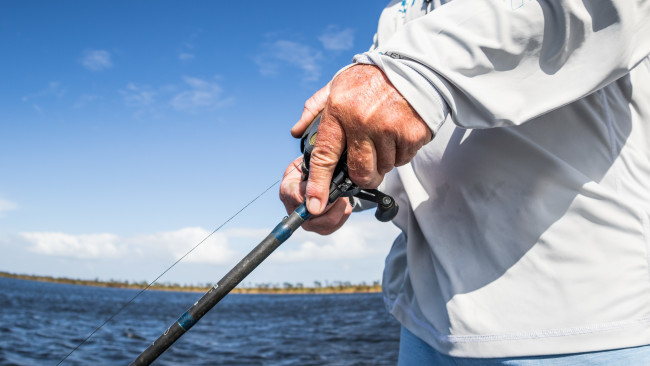 One of the major differences Anderson has noticed with topwater in Florida is that slow is the way to go.

“Anywhere up north I always fish it fast – the faster the better,” he says. “Everything down here, especially the prop bait, is super slow; almost dead-sticking it between pulls. And when you pull, you aren’t ripping it. I just want the props to turn. For the walking bait, there are no pauses, but it’s first gear, as opposed to sixth gear on the Tennessee River – just a smooth slow glide.”

That slow cadence is even more important if a fish blows up and misses the bait.

“It seemed like on the Tennessee River, when they missed it, I would speed it up. If he blew up on it and I still had a lot of line out, I would just walk it faster, and most of the time they would get it. Down here, they don’t really seem to want it to stop, but I try to make it walk almost in place. I let the bait turn each way more. If I can keep it in its face but keep it walking, they’ll bite it.” 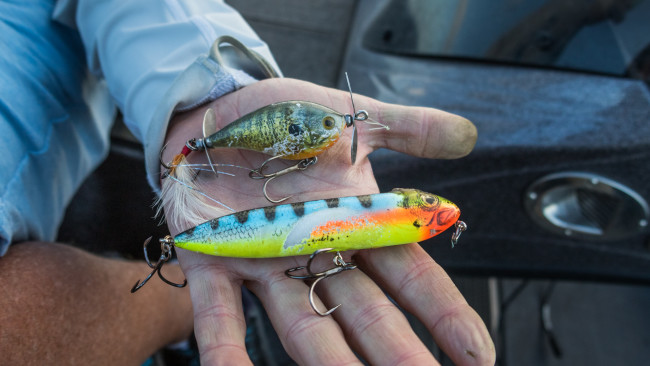 On the Tennessee River especially, bone-colored baits are pretty standard and usually successful. In Florida, Anderson has had to get more creative with colors to match the different forages.

It’s pretty common for prop baits to come in bluegill patterns, but Anderson has some custom-painted walkers made to look like bright-colored bluegills or the cichlids that are in the lakes he fishes.

“I took a friend the other day, and he took my all-time favorite Spook, the bone and silver Heddon Saltwater Super Spook, and his brother was throwing my bright perch one. He couldn’t get a bite on the bone, and then he took a marker and started coloring the belly and he started catching them.” 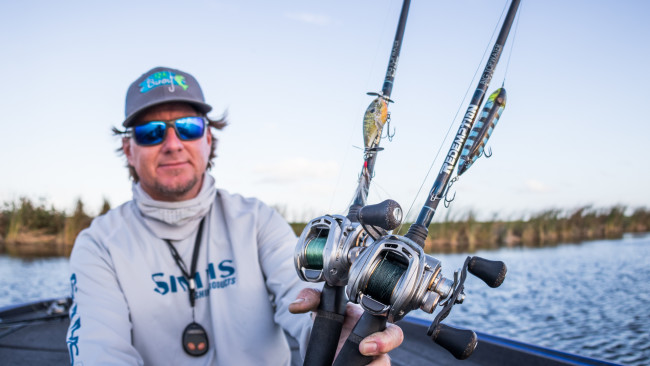 For tackle, Anderson doesn’t really make any special Florida tweaks. His topwater system is already as honed as it gets.

On the rod and reel side, he sticks with a Lew’s Team Lite Speed Spool LFS in a 7.5:1 gear ratio and a Redemption Rods Brent Anderson Custom Series Big Topwater rod.

For prop baits, Anderson uses 15-pound-test monofilament and ties a loop knot, which he thinks helps to keep the prop from tangling in the line. His baits of choice are a Smithwick Devil’s Horse, an H2O XPRESS Slush Daddy and a Bagley Bang-O-Lure Twin Spin. For walking topwaters like a Spook, Anderson always ties straight to an oval split ring with 65-pound-test Seaguar Smackdown braid. 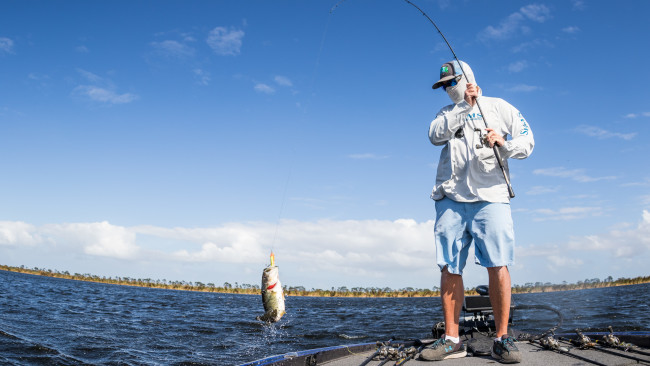 Lock it in your hand

Anderson is a truly transcendent topwater angler, but he’s not the only one to have success on top in Florida. Every year, tournaments are won from the Harris Chain to Okeechobee on topwater, and not just on the staple prop baits. The next time you fish in Florida, you’d be wise to tie one on. A big Florida bass crushing a topwater is a truly exceptional thing.