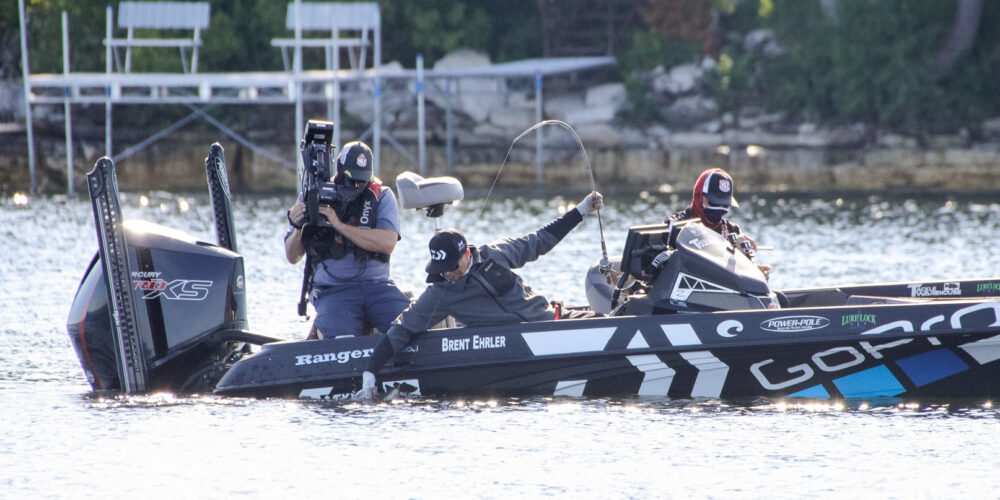 Yet who among us can’t claim some indebtedness to the tiny critters that led us to our first fish — the “angle worm” among them?

Brent Ehrler unabashedly credits the live nightcrawler for teaching him a lesson about fishing the tough, pressured waters in his home state of California during his early professional career. The timing of that lesson was opportune, too.

“The cold-water offseason period is often a time for pros to experiment as well as relax,” says the Mercury pro, recounting a day 20 years ago on one of his local lakes, California’s Lake Perris. “Perris is a pressured lake. You can fish it hard with artificials this time of year and catch only two to five fish in a day.”

Following one fishless day, Ehrler did what a purist might regard as unthinkable: He went to the local bait shop, bought crawdads and live nightcrawlers and — gulp! — went live bait fishing.

“With a nightcrawler on a drop-shot rig, I learned that I could catch 15 to 20 keepers a day where I was catching only maybe two on artificials before,” he says.

With a team tournament on the horizon, Ehrler experimented.

“I wacky-rigged that crawler on a drop-shot rig like I was fishing a plastic worm,” he recalls. “I’d let it sink to the bottom and sit in one place for a long time — about 30 seconds. Then I’d lift and jiggle it once or twice and let it sit another 30 seconds…The line would jump, and I’d catch one.”

Lesson learned, Ehrler envisioned a winning pattern for the tournament — not with live bait, of course, but with a suitable artificial replacement.

If he could find one.

He hunted the California garage-shop hand-pour bait operations for “the longest, skinniest plastic worm” he could find to simulate the long, stretched-out shape a live nightcrawler extends to in the water. Derek Rader, then owner of Rader Baits, fashioned the type of worms he was after by pulling the plastic from the mold early. Ehrler bought a bunch of the seemingly stretched-out worms and headed to the tournament.

“I took this long, skinny worm to one of my favorite structure spots on the lake and wacky-rigged it,” he recalls. “I threw it out, let it sink to the bottom and sit for 30 seconds, just like I’d done with the live crawlers. I lifted it up, jiggled it, let it sit another 30 seconds. When I lifted my rod tip to jiggle it again, I felt my line jump and caught my first fish of the day.”

That was just the beginning. The pattern, the rig, the worm, the technique — all held up that day.

The bass see my bait on the bottom. It sits there. They forget about it. But it’s still sitting there, wiggling…sitting, wiggling, sitting. Finally, they get mad enough, and they eat it.

“I caught the only limit of the tournament, but I ended up in second place,” Ehrler says. “I got beat out by a guy who caught a 10-pounder on a big swimbait. But that day showed me something. Those fish were there, and I had to fish them differently. I mean totally different. The fish had been there before. They had seen the (artificial) baits, but those baits were pulled away from them too quickly. But the longer the drop-shot worm sat in their face — right there in their strike zone — the greater the temptation to strike became.”

Ehrler pictured the underwater scene in his mind and tried to make sense of it. He speculated that, with a typically presented artificial worm, a pressured largemouth looks at the bait, lets it pass, then quickly forgets about it as it pulls away. The retrieve is too quick, not slow or patient enough to capture the interest of fish that have seen all too many worms bounce past them in similar hurry, he reasoned.

“The bass see my bait on the bottom,” he explains. “It sits there. They forget about it. But it’s still sitting there, wiggling…sitting, wiggling, sitting. Finally, they get mad enough, and they eat it. That’s my thought process behind it.”

Since that day, Ehrler has seen similar scenes play out across the country.

“If the fish are real lethargic but I know they are there, I can get those fish to bite if I have the patience to fish the drop-shot worm real slow,” he says.

Tackle for the Shy Bite

His weight of choice in most applications is a 1/8-ounce Ark Tungsten Skinny Drop Shot weight, a slim elongated weight. A typical dropper line in the rig is 12 to 14 inches.

Ehler’s typical drop-shot approach is more aggressive than the one he used at Perris — more movement, more shaking, though he still pulls the bait forward very little while imparting that action.

“But in the (cold/winter) situations like we have now, I really try to incorporate the technique if I know the fish are on a rock pile or piece of structure,” he says. “The key thing about a drop-shot rig is that you can move that bait without even pulling it toward you. Keep it on a rock pile all day if you want to! You can still make the worm move. It will shake when you shake it. It will fall when you put slack in the line. But it won’t move away from that rock pile or piece of structure.”

Although crawdads and waterdogs played a role in Ehrler’s early angler education, invasive species concerns prohibit the use of those baits and others in California and other state waters today. Aside from those lessons learned at Lake Perris, Ehrler says he hasn’t fished live bait in 20 years.

All the more reason to appreciate the lesson of the lowly worm.