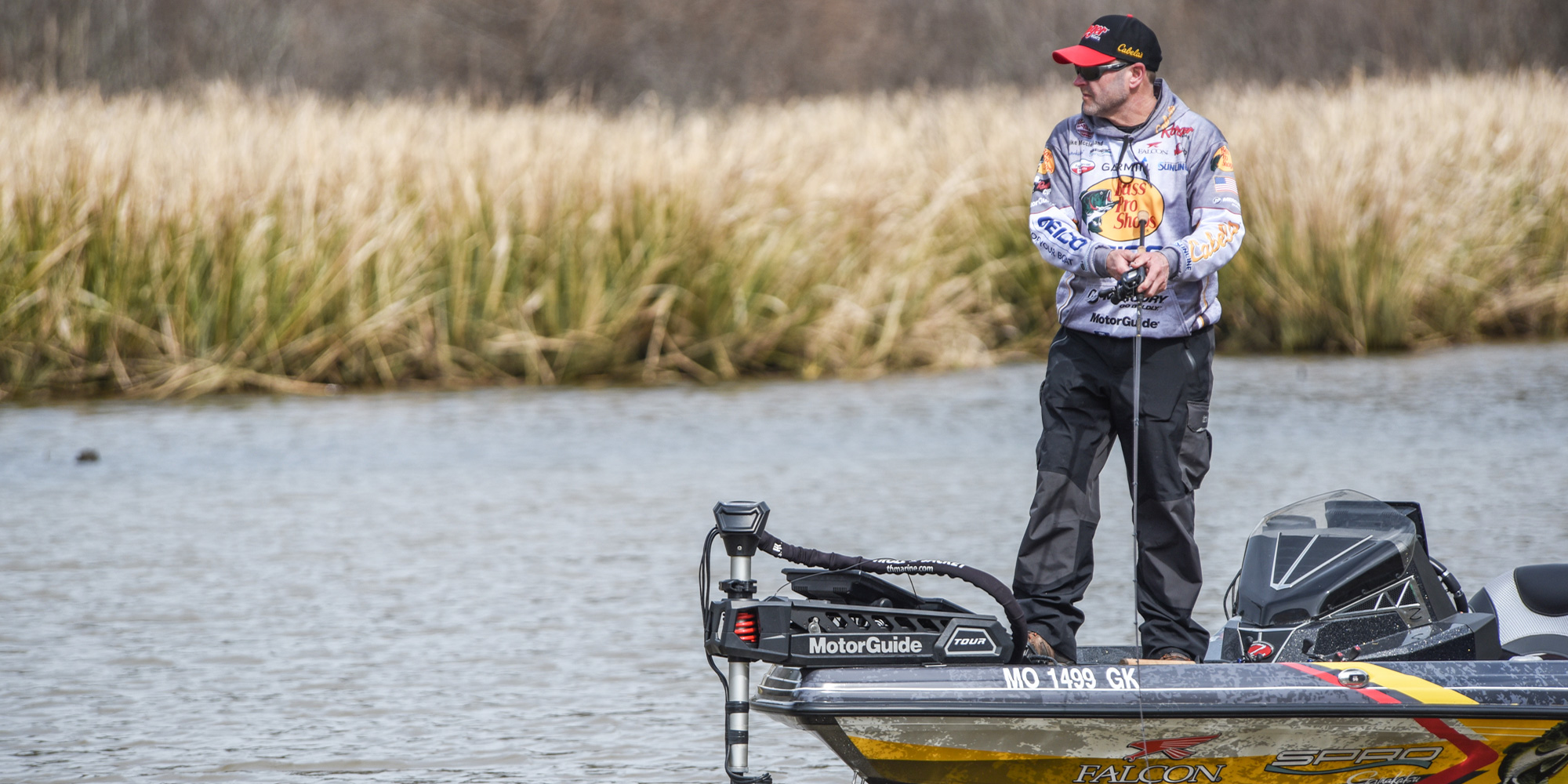 Mike McClelland shares why he thinks a swing head jig is the most versatile lure in his tackle box. Photo by Garrick Dixon

The swing head, wobble head, hardhead, or whatever you want to call it is now a favorite technique among bass anglers, thanks to MLF pro Tommy Biffle. He showed the world what it could do with a Bassmaster Elite Series win on Oklahoma’s Fort Gibson Lake in 2010, and since then, the technique has continued to evolve.

Many lure brands now produce these football-shaped weights with a free-swinging hook and they have proven to be effective on waters everywhere. MLF pro Mike McClelland is a huge proponent and has had success with it in various conditions, with several different soft plastics and in all seasons. He believes it’s one of the most versatile pieces of tackle in his box.

When and Where McClelland Fishes It

For McClelland, deciding when to fish a swinging football head comes down to where the bass are positioned.

“Any time I start to notice fish tight to the bottom, I’ll be throwing it,” he says. “You can look at your electronics or Garmin Panoptix LiveScope and see where the fish are in the water column. If they are up chasing shad around, it’s not the best way to catch them. I rely on it when they are more bottom oriented and feeding on crawfish and bluegill. That’s when it really comes into play.”

While the swinging head may be fished in traditional football head locations and situations, McClelland says they’re much different baits.

“The biggest difference between the two is the natural, swinging action you get from the swinging football head,” he says. “Also, the skirt of the football jig will make the jig rise more. The swing head is sleek and much easier to keep right on the bottom.”

While they may differ in action, McClelland will fish them in many of the same places and with the same gear, a 7-foot, 4-inch medium-heavy rod paired with a reel spooled with 10- to 18-pound Sunline Shooter or FC Sniper Fluorocarbon line.

“The main thing I look for is a hard bottom,” he says. “It could be fish that are relating to points and banks with some pea gravel or some chunk rock. That’s why a fluorocarbon line is a must because you can feel when it turns from rock to muck. Your bites are going to come when you’re around the harder bottom.”

McClelland will fish the swinging head as shallow as a foot and a half or water, and go as deep as he needs to, varying his weights as he gets deeper.

“I don’t use the 3/8-ounce very often, but it’s great in shallow conditions and I’ve had some great days with this technique in less than 3 feet of water,” McClelland says, adding that the 1/2-ounce and 3/4-ounce versions get most of his workload.

McClelland typically fishes the swinging football head with a straight retrieve as he keeps it in direct contact with the bottom.

“It’s mainly just a slow and steady retrieve when you feel it is hitting bottom,” he says.

As this way of fishing has evolved, so have the heads themselves. Some swing head jigs have a hook set on a wire form that allows the hook to move freely. Other brands sell just the weighted head and anglers can add whatever hook they choose while still keeping the swinging action.

McClelland prefers the latter as it lets him use his preferred hook, the Gamakatsu G-Finesse Hybrid Worm Hook.

In addition to using his favorite hook, he can downsize or upsize as needed and replace damaged hooks.

When it comes to the soft plastic bait, McClelland runs the gamut of different styles.

“The beauty is the versatility of the baits you can throw and the FLW Super Tournament on Lake Chickamauga this year was a great example of that,” he says. “I was primarily catching them on the Big Bite Baits Kamikaze Craw, but as the tournament wore on, they started to get wise to it. I switched to a Big Bite Baits Finesse Worm to give them a different look and continued to catch them. I also mixed in their new Tour Swim Worm and caught some with that.”