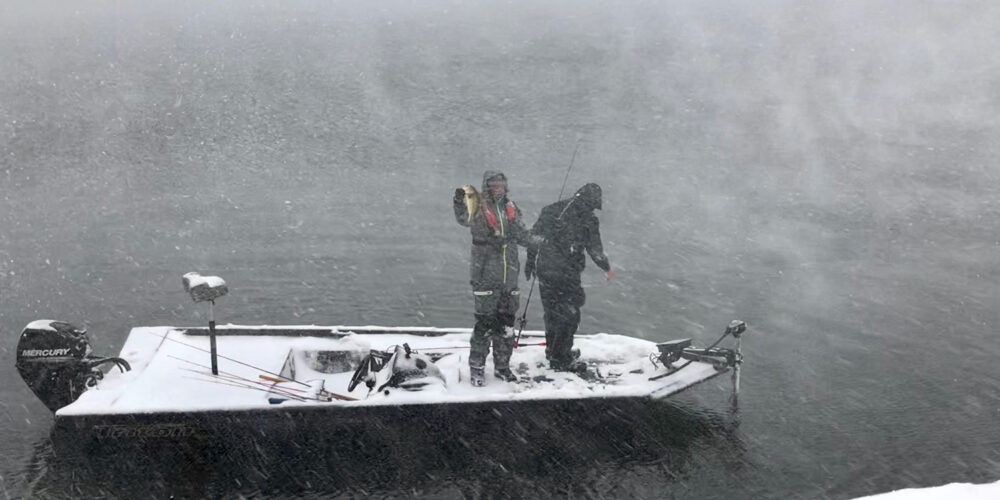 Old Man Winter may be knocking on your door by now, if he hasn’t already made his presence felt. As the calendar flipped to December, we’d already begun to see a few snow flurries (and even some full-on snowstorms) across the country.

December snow and cold may prompt most anglers to stay indoors, but a couple of MLF pros say that you may be surprised at how productive the dead of winter can be for bass.

Like the old song says, Rocky Top will always be home sweet home to David Walker. The MLF pro lives in Sevierville, Tennessee, in the heart of the Smokey Mountains, where he says he’s already seen the first snow falls of winter. When the forecast calls for snow, that’s when Walker begins to get his tackle ready for a cold but active day of fishing.

“I don’t know why but on snowy days, it’s on,” Walker said. “I don’t really know what to attribute that to, but the fish get pretty darn active. You think that the weather would have a negative effect on the fish, but it’s really the exact opposite. Typically, winter isn’t a great time of the year, but if it starts snowing, you can guarantee that I’m going to get out there.”

Kansas pro Brent Chapman agrees with Walker’s winter assessment. Chapman’s first experience with snowy fishing was about 15 years ago on Lake of the Ozarks in Missouri. For six days, Chapman struggled to figure the Ozark bass out in the midst of constant snow. While he struggled, other anglers prospered using the opposite approach of what Chapman’s instincts told him about catching fish in cold water.

“As a young and naïve angler, I was fishing slow like you would think you’re supposed to under those conditions,” Chapman recalled. “I found out after getting beat pretty bad all week that guys were hammering them on a buzzbait. So now I like to do that when it starts snowing up here in Kansas and Missouri, to work a little quicker since the fish for some reason become more active in the snow.”

When the snow starts falling, Chapman likes to look for a 45-degree rock bank for structure. Walker likes to work the bank as well, but with a specific bait in mind.

“The main thing I want to do is cover a bunch of water,” Walker said. “I usually try to start with a crankbait and work down the bank. I get my boat as close to the bank as I can so my bait will keep hitting the bottom. I want my crankbait to be hitting and deflecting off of rocks and other cover as much as possible.”

Laydowns and brush piles are pieces of cover that Chapman likes to focus on when there’s snow on the ground. While Chapman goes with a buzzbait due to his lessons learned in the past, Walker picks up a jig when fishing heavier cover.

“Whenever I don’t think I can get my crankbait through specific cover, I reach for a jig,” Walker explained. “I look for laydowns, docks, or brush when using that jig. I’ll usually pitch a jig out there in stuff like that – you can honestly use a jig the entire time if you feel like it.”